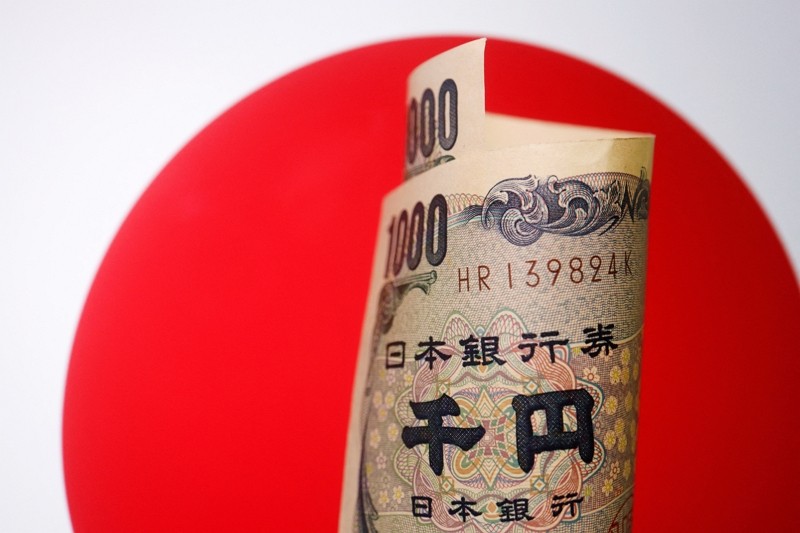 TOKYO, June 20 (Reuters) - The yen wallowed near a 24-year low against the dollar on Monday, licking its wounds after the Bank of Japan last week renewed its commitment to ultra-easy policy and bucked the trend among global peers to rapidly raise interest rates.

At the same time, the greenback lost ground against most other major currencies as investors continued to assess the risks to the economy from tighter monetary policy following the Federal Reserve's biggest rate increase in a quarter of a century.

The euro gained despite French President Emmanuel Macron losing an absolute majority in the country's parliamentary election over the weekend. read more

The dollar index , which measures the currency against the yen, euro and four other major peers, slipped 0.28% to 104.40, after reaching a two-decade high at 105.79 mid last week.

The BOJ on Friday bucked a wave of tightening that included the Fed, Bank of England and even a shock half-point hike from the Swiss National Bank. It also resisted attacks from bond market speculators testing the monetary authority's commitment to its 25 basis point tolerance band around the zero percent target for the 10-year Japanese government bond yield.

By contrast, the Fed followed a 75 basis-point rate hike mid-week by stating in its twice-yearly monetary policy report to Congress on Friday its "unconditional" commitment to fighting inflation, despite rising risks of recession. read more

Fed Chair Jerome Powell testifies before the Senate and the House on Wednesday and Thursday.

The drift lower in the dollar is being driven mostly by thin trading with the U.S. observing a public holiday on Monday, said Osamu Takashima, head of G10 FX strategy at Citigroup Global Markets Japan.

"Markets are still concerned about aggressive monetary tightening by the Fed, which is keeping U.S. yields elevated, boosting the dollar," he said. "The Fed has to tighten policy faster."

Takashima estimates that a rate of 140 yen per dollar is possible over the next 2-3 months if U.S. long-term Treasury yields climb to around 3.75%, from 3.23% currently.

The euro strengthened 0.37% to $1.0528, but staying well within its recent range. French President Macron lost control of the National Assembly in legislative elections on Sunday as populist parties made big gains - a major setback that could throw the country into political paralysis.