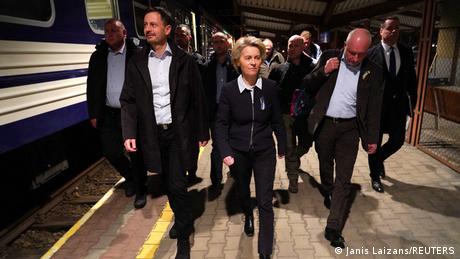 On Tuesday, March 15, 2022, the war in Ukraine had already been raging for three weeks. Russian troops had approached to within a few kilometers of the capital Kyiv, trying to break through its defenses from the north and west. The city had been rocked by heavy shelling in the morning and was at risk of being encircled.

And then came the news that several EU leaders had arrived in the Ukrainian capital to pay a surprise visit. Polish Prime Minister Mateusz Morawiecki and his deputy Jaroslaw Kaczynski, the leader of Poland's ruling PiS party, had travelled by train with the Slovenian and Czech leaders Janez Jansa and Petr Fiala. The pictures of them all poring over a map of Ukraine while onboard went viral.

They then met Ukrainian President Volodymyr Zelenskyy in the bunker under his official residence.

It had been important to keep the journey secret, given the danger that the leaders could fall victim to a Russian attack.

Though Russian troops have now withdrawn from the greater Kyiv area, it is still difficult to travel to the Ukrainian capital by any other means than by rail. The airspace over Ukraine has been closed since the February 24 invasion. Many roads are still barely accessible due to heavy fighting.

Thus, the railway has established itself as the best means of transporting politicians from around the world to Kyiv. The first historic trip by the central and eastern European leaders was followed by visits by other top politicians, including European Commission President Ursula von der Leyen, British Prime Minister Boris Johnson, Canadian Premier Justin Trudeau, and US Secretary of State Antony Blinken.

After some to-ing and fro-ing, Chancellor Olaf Scholz also decided to make the trip, along with French President Emmanuel Macron and Italian Prime Minister Mario Draghi.

Although fighting has now shifted mainly to eastern Ukraine, a journey to Kyiv by train is not without risk. Russian missile strikes continue to rain down on tracks, bridges and provincial train stations, particularly in order to disrupt arms supplies.

When foreign politicians travel to Kyiv by train, they often get on a Ukrainian train for the last leg of their journey from the Polish border because European and Ukrainian rail track widths are different. Delegations are usually accompanied by their own national security personnel as well Ukrainian security guards.

Secrecy is supposed to be of the utmost importance. The April visit of US Secretary of State Blinken and US Defense Minister Lloyd Austin was first made public only afterwards — for fear of a Russian missile attack.

Thus, Ukrainian and Polish security teams must have been displeased when Polish Prime Minister Morawiecki announced his visit while still en route to Kyiv. The chairman of Ukrainian Railways, Oleksandr Kamyshin, later told US broadcaster CNN that the show of solidarity was welcome, but it had been a little rash to advertise it so early. "That was really important for us, even if it was naive," he said. Since the invasion, Kamyshin and his colleagues have been operating from a train that constantly changes its location.

He said that he did not even tell his kids and advised them not to reveal their location either. "Everyone should understand that this is war. But I can't instruct prime ministers."

Nor can he give orders to European Commission presidents, apparently. Ursula von der Leyen also announced her visit ahead of time on Twitter — on the same day that a Russian missile attack of a train station in the city of Kramatorsk in eastern Ukraine killed over 50 people. The starting point of her journey was also made known in advance: the train station in the Polish town of Przemysl, just around 13 kilometers from the Ukrainian border.

British Prime Minister Boris Johnson's visit took place almost at the same time. It had been planned for weeks but was postponed several times for security reasons. It, too, was not supposed to be made public until afterwards, but it was the Ukrainian embassy in London that tweeted a picture of Johnson while he was still in Kyiv with Zelenskyy.

Even if secrecy is maintained, the Ukrainian railroad company cannot guarantee its VIP guests complete safety and that there will not be missile attacks. But it does try to make delegations as comfortable as possible.

According to a report by Radio Free Europe, one of the luxury carriages used in the past few months was built in 2014 to take wealthy tourists to Crimea. It probably served this purpose only a few times before the peninsula was annexed by Russia the same year. Other carriages being used date back to the Soviet era but were modernized a few years ago. Many feature king-size beds and flat-screen televisions. Those used as meeting rooms have upholstered seats and leather armchairs.

But not everybody is given the full VIP treatment. German Conservative opposition leader Friedrich Merz traveled to the Ukrainian capital in a first-class sleeper car, with only a narrow bed and fold-out desk. Nonetheless, this was presumably considerably more comfortable than some of the sleeper cars that still have wooden beds.

After arriving, the politicians do not usually spend much more than a few hours in Kyiv. This might give them time to meet President Zelenskyy, visit the war-ravaged suburbs and perhaps enjoy a meal. Johnson, for example, ate chicken soup, a goat's cheese salad, roast beef and cherry dumplings for dessert.

What is crucial is the symbolism, the photos, the words and gestures of solidarity, and most importantly the assurances that a politician's country stands firmly with Ukraine.

Then it's back on the tracks for a long return journey through a war-torn land.