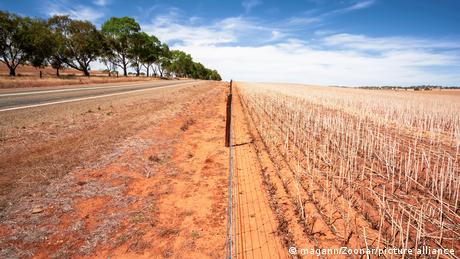 Newly elected Australian Prime Minister Anthony Albanese said Thursday that his government had made an "enhanced" climate submission to the UN, committing to reduce damaging emissions 43% below 2005 levels by 2030.

The new target is considerably more ambitious than that of 26 to 28% set by the previous conservative government under Scott Morrison, which lost in May 21 elections that included climate change as a key focus.

Australia has felt severe impacts from climate change in recent years, suffering extreme floods, fires and droughts, but until now has been well behind most other industrialized nations in its climate protection pledges.

What did Albanese say?

Albanese told reporters in the capital, Canberra, that his government had written to Patricia Espinosa Cantellano, the executive secretary of the UN Framework Convention on Climate Change, to inform her of the updated target under the 2015 Paris Agreement.

Albanese said legislation on the new target would be presented to the new Parliament, which will meet for the first time on July 26.

Parliamentary approval is, however, not needed to enshrine the target in law, he said.

He said the previous government's failure to agree on a climate policy had led to faltering investment in the country's energy sector over the past nine years.

"What businesses have been crying out for is investment certainty, the certainty that they need to invest over a longer time frame than the political cycle of three years,'" Albanese said.

Albanese has, however, so far declined to provide a concrete date for phasing out coal, in line with many other industrialized nations.

The submission update comes ahead of the next world climate conference, COP27, set to take place in Egypt in November.

Albanese's government could come under pressure to set an even more ambitious target by a parliament that has relatively strong contingents of green and independent lawmakers, who have called for 75% and 50 to 60% reductions respectively.

The previous government under Morrison, a supporter of the country's coal industry, had been regarded as making Australia a laggard among wealthy countries in combating climate change.

Australia is one of the world's largest exporters of coal and liquified natural gas, which has made the issue of cutting emissions a contentious one.

Large areas in the southeast of the country are also currently at risk of power outages amid an unusually cold onset of winter and the breakdown of several coal-fired power plants that are not being properly maintained amid the prospect of their imminent closure.