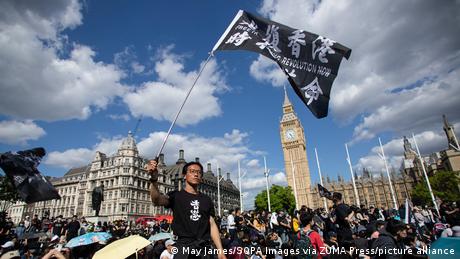 Hong Kongers around the world are remembering the third anniversary of protests in 2019, which were sparked by opposition to a controversial extradition bill but quickly morphed into a wide-scale movement opposing policies of the city's pro-Beijing government.

On June 12, thousands of people gathered in London and chanted the iconic protest slogan "Liberate Hong Kong, Revolution of Our Times." In Canada's Vancouver, hundreds of demonstrators re-enacted clashes between protesters and police that took place on June 12, 2019.

Similar protests also took place in dozens of cities in the United States, Australia, Japan and Taiwan. Participants chanted slogans and sang songs that are now banned in Hong Kong under a national security law that was imposed to crack down on demonstrations.

"Hong Kong's brand used to be colored by lots of nonviolent and mass-scale protests, but this character vanished when authorities used the national security law and coronavirus-related measures to crack down on nonviolent protests," said Eric Lai, a Hong Kong law fellow at the Georgetown Center for Asian Law.

"Street protests and nonviolent actions used to be the more effective ways for Hong Kong people to resist unfavorable policies or laws, but now they can no longer do that," he told DW.

In 2019, several mass-scale protests began against an extradition bill proposed by the Hong Kong government that would have allowed "fugitives" to be transferred to mainland China for prosecution, essentially bypassing Hong Kong's judicial independence.

Protests sparked by the bill went on for months, with violent clashes between frontline protesters and riot police. The protests led to the arrest of more than 10,000 people, and Hong Kong's police force was repeatedly accused of using excessive force against protesters. The bill was scrapped in October 2019.

Beijing handed down the national security law to Hong Kong in July 2020, criminalizing any acts of "secession, subversion, terrorism, and collusion with foreign powers."

Since then, opposition lawmakers have been removed from the legislative council, several pro-democracy media outlets have been forced to shut down, and more than 100 activists and opposition figures have been arrested.

During her appearance on a local radio program last Saturday, Hong Kong Chief Executive Carrie Lam insisted that she has no regrets for trying to pass the extradition bill.

"I've never expressed any regret over pushing for the extradition bill…nor have I thought the government had done anything wrong in this regard," she said, according to Hong Kong’s South China Morning Post.

Lam will leave her post in a few weeks, to be replaced by John Lee, a former security chief who is expected to extend hardline policies.

"It is expected that when John Lee becomes Hong Kong's new chief executive, he will introduce more censorship laws or policies to regulate different aspects of society while eliminating any potential opposition forces in Hong Kong," said Lai.

Maggie Shum, a researcher at the Global Policy Initiative at the University of Notre Dame, told DW more hardline policies from China can be expected to emerge in Hong Kong.

"Beijing is sending a signal that the framework will concentrate on national security. That's probably what Hong Kong will become in the future," she told DW.

"They will forcefully mold an identity and if people don't agree with the Chinese patriotic identity, they will be hit with a baton," said Shum. "That's the continuation of the hardline repression that started during the protest."

The long arm of Beijing

Lai from Georgetown told DW that the Chinese government had been threatened by the mass-mobilization in 2019, and its response was to exert more control over Hong Kong's semi-autonomous legal system.

"The greatest threat to Beijing at the time was nonviolent mobilizations in Hong Kong, including the million people's march or people's attempt to carry out advocacy overseas in a peaceful and nonviolent manner," he said.

"Before the national security law was imposed, there were no effective means to stop nonviolent protests abroad. It was quite clear that the law has a strong focus on the citizens' nonviolent activities, including local or overseas peaceful rallies or advocacy," he added.

"There is definitely fear, especially the way they targeted big media companies like Apple Daily and Stand News," said Maggie Shum. "It’s not just the law but also the apparatus that comes around the law," she added.

Apart from cracking down on all aspects of Hong Kong's civil society, Shum said that the national security law also aims at cutting off the connection between the diaspora community and Hong Kong.

"At the beginning of the protest, a lot of overseas Hong Kongers helped with crowdfunding or sending different supplies back to the city," she said.

"Others focused on lobbying to bolster the movement from outside of Hong Kong. Since the national security law could target someone outside of Hong Kong, it really sends a chilling effect on the diaspora community. The organizers of diaspora organizations find it harder to connect with Hong Kong because people are afraid to talk or make connections," she added.

In an interview with US network CNBC last week, Carrie Lam said she thinks the implementation of the national security law, as well as the reformation of the electoral system, are "absolutely necessary to ensure Hong Kong's continuous stability and prosperity."