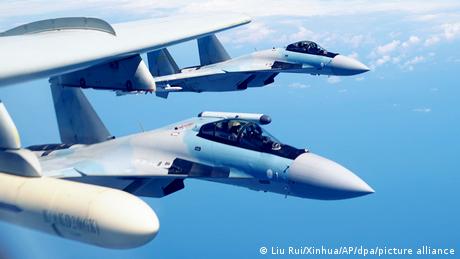 On Monday, US national security advisor Jake Sullivan and top Chinese diplomat Yang Jiechi met in Luxembourg for unannounced talks on "a number of regional and global security issues," with Taiwan at the top of the list.

The meeting comes after Chinese and US defense ministers exchanged heated words about Taiwan during the Shangri-La Dialogue, an Asian defense summit, in Singapore on Sunday.

"If anyone dares to secede Taiwan from China, we will not hesitate to fight. We will fight at all costs, and we definitely will fight to the very end. This is the only choice for China," he said.

The comments came after US Secretary of Defense Lloyd Austin slammed Beijing at the summit for its "coercive and aggressive approach to its territorial claims."

"We've witnessed a steady increase in provocative and destabilizing military activity near Taiwan, and that includes PLA [Chinese military] aircraft flying near Taiwan in record numbers in recent months and nearly on a daily basis," he said.

On Sunday, Chinese Foreign Ministry spokesperson Wang Wenbin said "China has sovereignty, sovereign rights and jurisdiction over the Taiwan Strait," adding that there is no legal basis to call the Taiwan Strait "international waters."

"Countries call the Taiwan Strait international waters in order to find a pretext for manipulating issues related to Taiwan and threatening China's sovereignty and security. China is firmly against this," he added.

Taiwan rejected Beijing's claims, while insisting that the Taiwan Strait consists of international waters, except for areas that can be defined as territorial waters.

"Our government has always respected any activities conducted by foreign vessels in the Taiwan Strait that are allowed by international law," said Taiwanese Foreign Ministry spokeswoman Joanne Ou.

Zeno Leoni, a defense studies lecturer at King's College London, told DW Chinas sovereignty claim over the Taiwan Strait is a way to challenge international law and the freedom of navigation that has been repeatedly upheld by the US and its allies.

"China disagrees with freedom of navigation and international law because they think these were all set up by the US after World War II," he said.

Wen-Ti Sung, a lecturer in Taiwan Studies at Australian National University (ANU), who is currently based in Taiwan, said that China's sovereignty claim over the waterway could further destabilize the region and increase saber-rattling and heightened risks of accidental military escalation.

"Beijing's pronouncement will likely prompt increasingly public pushback from the US," he told DW.

"The US Navy's freedom of navigation operations in and around the Taiwan Strait will likely increase in frequency and publicity, to signal that the US disagrees with Beijing's position," he added.

Taiwan is democratically self-governed, but Beijing considers it to be a renegade province, which one day will be reunited with mainland China.

The US walks a diplomatic tightrope between China and Taiwan, by maintaining unofficial diplomatic relations with Taipei and helping Taiwan "maintain a self-defense capacity" under the Taiwan Relations Act. However, under the "one China policy," the US acknowledges there is only one Chinese government, which is the cornerstone of maintaining relations with Beijing.

Last month, US President Joe Biden said the US would militarily protect Taiwan if the island is attacked by China.

However, Defense Secretary Austin and US Secretary of State Antony Blinken have both emphasized that Washington's policy towards Taiwan has not shifted.

Jessica Drun, an analyst at the Atlantic Council's Global China Hub, told DW that Biden's comments were nothing more than "reiterating longstanding U.S. policy towards Taiwan."

Sung from the ANU said while Beijing's rhetoric is "graphic," it doesn't say anything new about its longstanding threat to use force against Taiwan.

Asian security analysts say China's calculation on whether to invade Taiwan centers on the PLA's ability to win a war that may involve the US. Russia's invasion of Ukraine has also raised fears that China could do something similar in Taiwan.

"The fact that Russia has invaded Ukraine is not going to change China's calculation on that matter and I think China's calculation is that it will not be able to win a war that involves the US for at least another 10 years," said Lynn Kuok, a senior fellow for Asia Pacific at the International Institute for Strategic Studies.

"If anything, the war in Ukraine and how it's panned out might make China even more reluctant to take military action against Taiwan in the near to medium term," she told DW.

Other observers point out that since Beijing is very risk-averse, it knows that a military offensive against Taiwan will be extremely challenging.

"China knows that a military offensive against Taiwan is politically costly and difficult," said Leoni.

"Because of all of this, they tend to use gray zone tactics [against Taiwan] and we could see more and more of that in the future. These are ways to exert pressure on Taiwan without upsetting the United States and triggering any reaction from the West," he told DW.