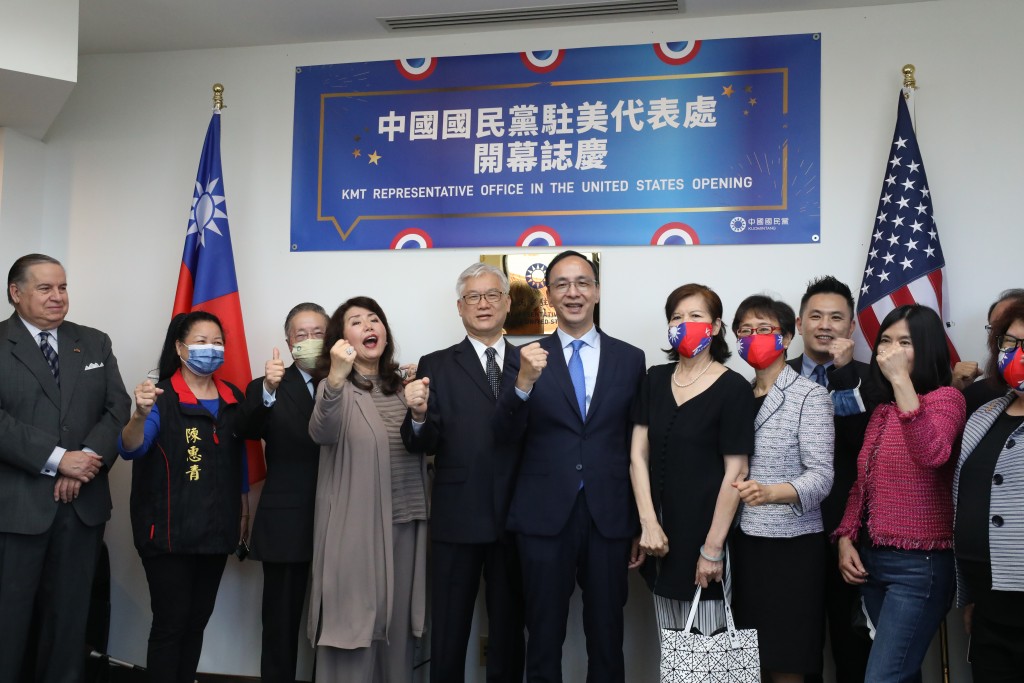 TAICHUNG (Taiwan News) — Kuomintang (KMT) Chair Eric Chu (朱立倫) has just returned from a trip to the United States, where he re-opened the party’s Washington D.C. office, met with overseas compatriot groups, academics, officials, the Project 2049 think tank, and did everything he could to impress his hosts.

He claimed the KMT has “always” been pro-U.S., has never been pro-China, has fought communism for over 100 years, and called the 1992 Consensus a “non-consensus consensus.” Curiously, he also revealed that he is apparently the 29th generation descendant of a Northern Song Dynasty (960-1279) Chinese poet.

Chu sought to assure his American audience that he is on their side, and by still being able to talk with the Chinese Communist Party (CCP) the KMT is a force for stability and dialogue in the Taiwan Strait — unlike the Democratic Progressive Party (DPP), which has been locked out of any discussions since President Tsai Ing-wen (蔡英文) took office in 2016. Most importantly, he wanted to dispel the idea in Washington the KMT is pro-China and can’t be trusted.

That message was starkly contrasted on an almost concurrent visit to China by Chu’s predecessor, former KMT Chair Hung Hsiu-chu (洪秀柱), who in a Facebook post described China’s genocide in East Turkestan (Xinjiang) as “anti-terrorism.”

She was also quoted in China’s Xinhua News Agency as saying: “All kinds of facts have shown that accusations against China's Xinjiang fabricated by the United States and some other Western countries are totally smearing.”

Chu’s assertion that the KMT has always been pro-U.S. and anti-communist isn’t entirely accurate, neither historically nor currently. The reality, as the radically divergent messaging from Hung and Chu demonstrates, is more complicated than that.

The KMT traces its roots to the movement to overthrow the hated “barbarian” Manchurians from the Qing Dynasty (1636–1912) throne in China, and restore native Han Chinese rule under a republican form of government. Over time, it endured civil wars, rose to rule most of China, battled the Japanese, lost China to the Chinese Communist Party, and fled with the tattered remnants of the Republic of China government to remote Taiwan.

Taiwan, which had through most of this period been a colony of the Japan Empire, was a fairly alien place to the new arrivals, with the native inhabitants speaking Japanese and various regional Han and indigenous languages. The KMT set about seizing the apparatus of power from the Japanese colonial government and, not trusting the locals (especially after they violently rose up against mismanagement, corruption and inflation in 1947), filled nearly all positions of power and influence with newly arrived Chinese exiles.

These exiles and their families, in spite of making up only between 10% and 20% of the population, set about remaking Taiwan and the Taiwanese in their (Chinese) image. This included the KMT ideology, its pantheon of heroes and villains, and mythology of an epic past, all taught to schoolchildren in their imported national language, Mandarin.

Much of the top leadership in the KMT grew up in this environment, and this self-image remains very real in the minds of many in the party, especially those from Chinese exile families. Both officially, and in the hearts and minds of their followers, the KMT is Chinese, and Taiwan is part of China.

In the U.S. when Eric Chu was talking tough about defense and 100 years of opposing communism, he was referring to defending the Republic of China (ROC) and the fight with the CCP going back to the Chinese civil war.

The 1992 Consensus that the KMT and CCP both say they accept is formulated on the KMT side as “there is one China, each side with its own interpretation” — though the CCP has never accepted the “each side” part and considers the ROC an extinct state superceded by the founding of the People’s Republic of China (PRC) in 1949.

Both the KMT and CCP strongly maintain the South China Sea, the Senkaku (Diaoyu) Islands, Tibet and other territories are Chinese territory, though they disagree on which China they belong to. Taiwan maintains several outposts in the South China Sea due to this legacy.

Chu’s message to his American audiences was, in essence, the standard approach of the KMT through the martial law period and into the early democratic period in the late 1990s. They were fiercely anti-communist, devoted to defending the ROC and pro-U.S.

To this day, the KMT has been largely pro-American, but unlike Chu’s “always pro-U.S.” claim, the relationship has been rocky at times, and American “betrayal” at key points is a crucial part of the KMT’s mythology. When the KMT ruled China, the treaty ports (including the American concessions) were a sticking point, as was the U.S. at various points in the civil war intervening to try and get the KMT and CCP on the same page in the fight against the Japanese invasion.

After the move to Taiwan, there were often clashes, including over the U.S. blocking the KMT from attempting to “reclaim the mainland,” the behavior of U.S. troops locally (which led to the sacking of the U.S. embassy by a mob in 1957), and efforts to open up Taiwan’s markets and devalue the currency. There was also the dropping of diplomatic ties in favor of Beijing, which many both inside and outside the KMT still view bitterly.

Another incident that led many young activists, including future president Ma Ying-jeou (馬英九), to protest was the Baodiao movement after the U.S. handed the Ryukyu Islands back to Japan. Included in the deal were the Senkaku (Diaoyu) Islands, which the KMT and CCP both claim belong to China.

These incidents, and many others over the years, have left a residue of distrust and resentment among many Taiwanese, especially in the KMT. This was evident in the recent vehement KMT protests against the government dropping the ban on the import of pork containing ractopamine.

That being said, however, the KMT has remained pro-U.S. over the years. The help the U.S. provided during the evacuations from China, the diplomatic support for “free China” until the 1970s, and the years of massive financial and military support during the Cold War overall meant the KMT and Taiwanese remained pro-American.

Considerable cultural and economic ties have been built over the years, deepening the relationship. Indeed, most of the top KMT leaders were educated in the U.S., and many of their children are American citizens.

As pro-U.S. as the KMT has remained, since 2000 another force inside the KMT has arisen: Pro-Chinese. Any American assessment of the KMT needs to keep this in mind.

That will be the subject of the next column.