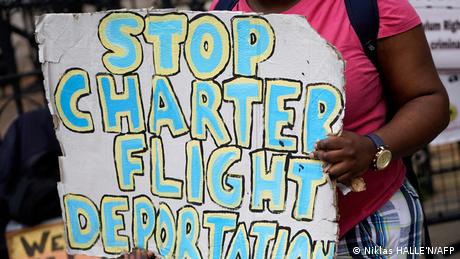 A plane carrying the first group of deported UK asylum seekers is set to take off for Rwanda on Tuesday evening.

The flight will go ahead despite last-minute legal challenges from civil rights groups. As a result of previous challenges, local media report that the flight's roster has dwindled from more than 30 to seven passengers.

Why is the UK sending asylum seekers to Rwanda?

The UK hopes to deter irregular migrant flows into the country.

The number of migrants that make the harrowing journey across the English Channel on small vessels is on the rise. Detected arrivals of this nature have increased from 229 in 2018 to over 28,000 last year, according to UK government figures.

Rwanda is home to a growing number of refugees. The country built a transit center to host deported asylum seekers in 2019 and hosts Libyan migrants who attempted journeys to Europe via the Mediterranean Sea. Last year, the Danish government signed a a non-binding agreement with Rwanda to host their refugees as well.

Civil society groups appealed the agreement with Rwanda at London's High Court. The court threw out appeals from rights groups to stop the deportations , but consented to hearing more appeals before the flight. However, the UK Supreme Court refused a last-ditch appeal on Tuesday.

Why is Rwanda taking asylum seekers?

Despite rapid tech innovation, Rwanda is still densely populated with few major towns due to rolling hills that make up the country´s topography.

Kagame still claims that the country is both welcoming and capable of hosting refugees.

The East African nation aims to reach middle income country status by 2025. However, Kagame's government has a poor track record for human rights and freedom of speech. Rwanda scored just 21/100 in the Freedom In The World 2021 report

What happens to deportees when they arrive?

Those set to arrive will be met with shelters around Rwanda´s capital, complete with private rooms, pools, and televisions, says AP.

After arriving they must then apply for asylum in Rwanda.

Refugees already settled in the country have expressed dissatisfaction with their conditions.

"I pray daily to God that I leave this place,'' said a 20-year-old Ethiopian refugee in Rwanda in an interview with AP.

Others have been able to find gainful employment and a place in Rwandan society.

"They have a disease in the head and cannot settle here," said a 22-year-old from Ethiopia when asked about his friends' desire to further migrate to another country.

What opponents to the agreement say...

Rwanda is also embroiled in a 25-year long dispute with neighboring Congo. Both countries accuse each other of firing artillery across their shared border.

The UN High Commissioner for Refugees, Filippo Grandi cites limited resources as a shortcoming in Rwanda´s ability to host and process asylum claims. Britain is "exporting its responsibility to another country," Grandi said.

Bishops from the Church of England also denounced the relocation plan in an open letter describing calling it an "immoral policy that shames Britain."

Government Spokeswoman, Yolande Makolo, defended the deal calling it "innovative" and a solution for a "broken global asylum system" on Tuesday.

What the UK government says

London has also been steadfast in its decision to deport asylum seekers to Rwanda.

"We think it's a sensible partnership we've set up with Rwanda...it may take a while to get working properly, but that doesn't mean we're not going to keep going," Johnson told reporters on Tuesday.

Johnson claims that the partnership will help dismantle criminal networks that smuggle migrants to the UK by waterways in exchange for cash.

Johnson told his Cabinet that the networks undermine "people's general acceptance of immigration,'' before a meeting in June.

The UK´s government has a track record of retroactively deporting those with an unclear immigration status. In April 2018, the UK threatened to deport those from the Windrush generation, who arrived in the country from the Caribbean in 1948 and 1971 to fill post-World War II labor shortages.