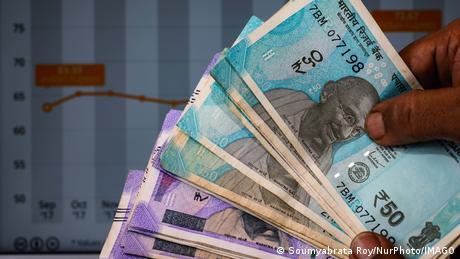 The Japanese yen and India's rupee on Monday slid against the US dollar ahead of an expected move by the US to raise interest rates again.

With $1 dollar worth 135.19 yen, Japan's currency on Monday morning was at its lowest against the dollar in 24 years, since the Asian currency crisis of 1998.

The rupee fell to 78.2825 for 1$, another all-time low, with the currency's value in uncharted territory against the greenback for several months now.

This comes amid rising prices globally, as well as capital outflows in emerging markets as investors turn risk-averse.

What's behind the fall of the yen?

Several currencies have been weakened in recent months as the US Federal Reserve moves toward tighter policies to tackle soaring inflation triggered by Russia's invasion of Ukraine.

The Bank of Japan, however, has taken a different approach to the Fed, sticking to its long-standing monetary easing program in hopes that it will stabilize growth.

"The ongoing backdrop to the yen's fall is the growing gap between long-term interest rates in Japan and the United States," Takahide Kinouchi, an executive economist at Nomura Research Institute, said in a recent commentary.

What about the rupee?

The Indian central bank has also sought to stabilize the currency by selling off foreign currency.

With inflation jumping in India, hitting an eight-year high of 7.79% in April, the government banned wheat exports, capped sugar exports and cut duties on fuel and food oils.

Euro on a similar trajectory

European currencies have been on a similar trajectory in recent weeks and months, with the euro, the Swiss franc and the British pound all hitting roughly four-week lows against the dollar on Monday in early trading.

The euro slid to just below $1.05 for the first time since mid-May, the franc reached 0.99 to the dollar and pounds Sterling traded at just over $1.22.

The heightened expectations about the US raising interest rates, as well as new mass COVID testing in China, sent Asian stocks plummeting on Monday.

Beijing's most populous district, Chaoyang, announced earlier on Monday three rounds of mass testing for the coronavirus after an outbreak emerged at a bar. The risk of fresh COVID lockdowns was in markets' focus.

"It is turning into a Black Monday in Asia," Jeffrey Halley, senior market analyst at OANDA, wrote in a client note.

"The R-word [is] now on everyone's lips" amid "a scramble to reassess Fed hiking expectations," he wrote.

The trend was expected to extend into US and European trading; Germany's Dax, France's CAC 40 and Britain's FTSE 100 were all in the red by 1.7% or more by late morning.