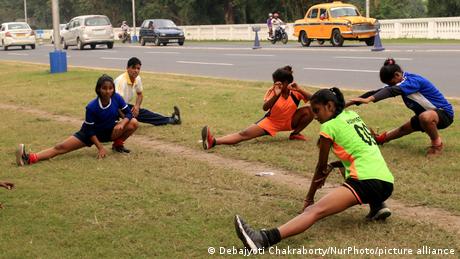 Last week, the Sports Authority of India (SAI) dismissed chief cycling coach R K Sharma after a female cyclist accused him of "inappropriate behavior" during a training tour of Slovenia.

The cyclist said the coach forced her to share a hotel room with him on the pretext that accommodation has been arranged on twin-sharing basis. A preliminary report of an inquiry committee found the female cyclist's allegations to be true.

The same week the cycling case was made public, a top Indian female sailor accused her coach of making her "uncomfortable" during a training stint in Germany.

The athlete turned to the SAI for intervention after raising the issue with the sailing federation several times and not receiving a response.

These are only the most recent of numerous allegations and incidents. In a prominent case from July last year, seven female athletes came forward with sexual harassment allegations against renowned sports coach P. Nagarajan.

In one case involving a 19-year-old female athlete, Nagarajan was arrested after the athlete alleged the coach threatened to murder her and her family members if she created any trouble for resisting his advances.

"Athletes are particularly vulnerable because of how hierarchical the coach-athlete relationship is in the sporting context," Payoshni Mitra, CEO of Global Observatory for Gender Equality and Sport, told DW.

"There is a culture of subservience in sport and therefore 'grooming' becomes common, making it very hard for athletes to come forward and complain," she added.

"There is also a culture of bystanding in sports. People do not take action even when they are aware of abuse. Bystanders help maintain a status quo in favor of the accused especially when the accused is powerful," Mitra said.

According to data gathered from a right to information application submitted by DW, it was found that between 2010 to 2020, there were 45 complaints of sexual harassment to the SAI, of which 29 were against coaches.

However, action against them was minimal. Five coaches were penalized with pay reduction, one was suspended and two had contracts terminated.

"There has been no deterrent action as inquiries dragged on. Some of the coaches were allowed to continue working with young athletes. Abuse is still part of the Indian sporting ecosystem especially in team sports," a top sportswoman told DW on condition of anonymity.

How can more athletes come forward?

Out of the 56 recognized national sports federations, only a few have internal complaint committees to specifically investigate sexual harassment.

Many athletes affirm that sexual exploitation is common in Indian sports. However, coming out to name perpetrators after undergoing trauma for years can be very difficult.

Legendary Indian athlete Anju Bobby George, who was a former World Athletics Championship medalist, was tasked in 2017 to be a part of a nine-member government panel to come up with a uniform national sports development code.

She recommended setting up a dedicated helpline for female athletes across India run by a senior female official at the SAI.

"Nothing has happened yet, and it is still being processed. There are solutions to act on this blemish that threatens sports, but there has to be a will to act," George told DW.

"In team events, the chances of abuse are high especially with a male coach and support staff," she added.

Last year, George won the Woman of the Year Award by World Athletics for grooming talent and encouraging young girls in India to take up sports and fight for gender equality.

"Sports bodies have to take the lead and set conditions right so vulnerable athletes feel secure to come forward and complain," said George.

How to change the system?

In many cases, the absence of clear selection criteria in competitive sports makes female athletes reluctant to speak out and potentially jeopardize their career.

"One way out is to allow women to be in charge of selection of team events. There is no dearth of female athletes to head such bodies," P S M Chandran, head of sports and exercise science at the Khelo India State Centre of Excellence, told DW.

Many athletes and sports persons also believe the government must make it mandatory for all sporting bodies to publish regular reports explaining the performance of internal complaint committees and publish details on the organization's website.

"Each of the complaints that we have heard of in recent times should be considered as an opportunity to change the sporting system and make it safer. Often those in power prefer the status quo and consider such complaints as an attack on the reputation of sports," said Mitra.