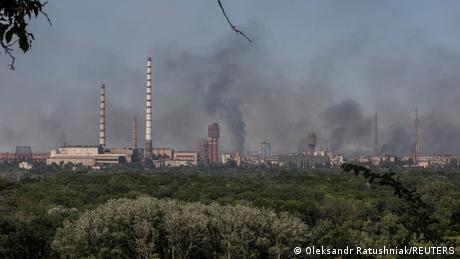 Steinmeier told the Bild am Sonntag newspaper, "Gerhard Schröder's commitment to Russian energy companies has raised many question marks in Europe, especially among our Eastern European neighbors, and has left many question marks also with regard to our country."

Steinmeier was head of the Chancellor's office during Schröder's time in office from 1999 until 2005 but appeared to be trying to distance himself from his former political ally.

"We went our way together for 15 years, and for 17 years I have gone my political path without him. During this time, Gerhard Schröder made personal decisions that have led us apart," Steinmeier said.

Steinmeier has also faced criticism for his perceived closeness to Russia and only after considerable hesitation did he say he had made mistakes in his evaluation of Russian President Vladimir Putin. Photographs appearing to show Steinmeier's friendly relationship with Putin and Russian Foreign Minister Sergey Lavrov during past encounters continue to incense Germany's eastern neighbors.

Serhii Haidai, the governor of the Luhansk region, said Ukraine remained in control of the Azot chemical plant in Sievierodonetsk, where hundreds of civilians are said to be sheltering, despite a large fire caused by Russian shelling.

On the Telegram messaging app, Haidai said, " The information about the blockade of the Azot plant is a lie." He added, "Our forces are holding an industrial zone of Sievierodonetsk and are destroying the Russian army in the town."

By contrast, Rodion Miroshnik who represents Russian occupation authorities in Luhansk claimed civilians had begun to leave the plant. He said those who remain are "hostages."

Approximately 200 employees of the plant and 800 civilians are believed to be sheltering in underground bomb shelters at the plant.

What happened in Russia's invasion of Ukraine on Saturday

Ukrainian President Volodymyr Zelenskyy said heavy weapons and artillery will determine the Ukrainian army's ability to fend off Russian attacks in the Donbas region. Zelenskyy said Ukrainian forces "are doing everything to stop the offensive, as much as they possibly can," and that they would continue to do so "as long as there are enough heavy weapons, modern artillery."

German newspaper Bild am Sonntag reported on Saturday that German Chancellor Olaf Scholz is planning a joint trip to Kyiv with French President Emmanuel Macron and Italian Prime Minister Mario Draghi. The German government has not commented on the report.

European Commission President Ursula von der Leyen returned to Kyiv on Saturday for a meeting with President Volodymyr Zelenskyy as the EU is evaluating Ukraine's bid to start the accession process and ultimately join the bloc. Zelensky said that a positive reply from the EU would be a historic moment for Europe.

The mayor of the port city of Mariupol Vadym Boychenko said sanitation systems were broken and corpses were rotting in the streets after the city was reduced to ruins by a Russian siege. Boychenko is no longer in the city following its capture.

The office of Ukraine's prosecutor general said on Saturday that it has learned of the deaths of 24 more children in Mariupol "as a result of the indiscriminate shelling by the Russian military." In total, the office said that at least 287 children have died since February 24, when the Russian invasion began.

Serhii Haidai, governor of Luhansk province, also accused Russia of flamethrowers in a village in Ukraine's eastern Luhansk province, southwest of the fiercely contested cities of Sievierodonetsk and Lysychansk.

British military intelligence said in its latest update on the war in Ukraine that since April, Russian bombers have "likely" been launching "dozens" of 1960s-era heavy, anti-ship missiles meant to destroy aircraft carriers with nuclear warheads against land targets in Ukraine. The Kh-22 missiles, when used in ground attacks with conventional warheads, are "highly inaccurate and can cause severe collateral damage and casualties."

The family of a UK national, Shaun Pinner, who was fighting for Ukraine and was condemned to death by a court in the self-proclaimed Donetsk People's Republic (DNR), said they were devastated by the outcome of what they said was an "illegal show trial." Pinner was one of three foreign men convicted by the separatist court for allegedly engaging in mercenary activities and terrorism.

Speaking at a Democratic Party fundraiser in Los Angeles, US President Joe Biden said his Ukrainian counterpart Volodymyr Zelenskyy had doubted US intelligence about Russia's pending invasion. He said many people thought he was exaggerating when he warned of the possibility of a Russian attack.

You can revisit our updates from Thursday, June 9, here.