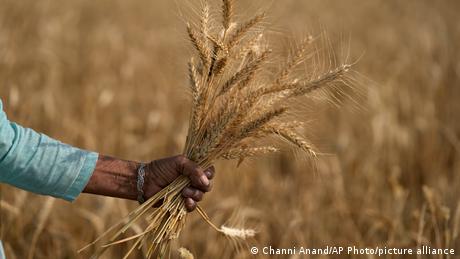 The timely onset of the monsoon season in India bodes well for the economy, especially for farmers whose land is irrigated by the annual southwest monsoon.

This monsoon provides a lifeline for about 60% of the country's net cultivated area and industries linked to it. However, experts fear that the monsoon may be unevenly distributed this year.

Although the first rush of monsoonal rains arrived in southern India last week, it has been far from normal, heightening fears that its progress over the northern region and the northwest could be erratic and, maybe, delayed.

According to Indian Meteorological Department (IMD) officials, the monsoon in Kerala state has been slow and weak, recording a 54% deficiency in rainfall in the first 10 days since the declared onset on May 29.

The IMD considers a range of factors, such as rainfall, wind field — or the pattern of the winds — and outgoing longwave radiation (OLR), before declaring the onset of monsoon.

Skymet Weather, which provides weather forecasting services, said that although the monsoon arrived over Kerala before its usual time, its onset has been subdued.

"The monsoon has covered parts of Karnataka and Tamil Nadu well before the expected time but farmers must wait for at least the next eight to 10 days for the typical monsoon rains to arrive, which will help in sowing the crops," Skymet said.

How do cyclones propel monsoons?

For the past two years, multiple cyclones in late May and early June helped pull the monsoon winds over the Indian subcontinent, causing an early onset of the weather and even floods in many parts of the country.

Meanwhile, Cyclone Asani dissolved in mid-May of this year and helped the monsoon move into the Andaman Sea but did not pull it further out.

"At this point, Kerala has a below-normal rainfall based on the long-range forecast in May," D S Pai, the director of Institute of Climate Change Studies, told DW.

"The cyclonic wave needs to strengthen further. If a low-pressure area forms over the Bay of Bengal in the next few days, then it will propel the monsoon," added Pai.

Those views are echoed by Roxy Mathew Koll, a climate scientist at the Indian Institute of Tropical Meteorology. Koll said that a late and sluggish southwestern monsoon in the first two months could mean dry spells, especially in many regions in the north.

"A slow or delayed progress of the monsoon could aggravate the water and food security of those regions in the north and northwest regions of the country that have already been affected by a rain deficit and heatwaves," Koll told DW.

"The monsoon has not been moving inland. Therefore its progress could be delayed. A lot will depend on its progress and, more importantly, uniform distribution across the country in the next two months," he added.

India gets about 70% of its annual rainfall in the June through September monsoon season, making it crucial for an estimated 260 million farmers.

The vast majority of Indians — about 800 million people — live in villages and depend on agriculture, which accounts for about 15% of the nation's gross domestic product (GDP). A failed monsoon can have a rippling effect on economic growth.

Farmers typically begin preparing their fields for sowing within the first week of June, but those operations may be delayed.

The planting of key summer crops like rice, sugar cane, pulses and oilseeds begins with the arrival of monsoon rains in June.

Summer crops account for almost half of India's food output, and a delayed or poor monsoon means supply issues and acceleration in food inflation, a key metric which influences the Reserve Bank of India's decision on interest rates.

A good monsoon season could help reduce inflation, which jumped to an eight-year high in April and prompted the central bank to raise lending rates.

Many hope the rains will provide relief from the intense summer heat that has hit the wheat crop and triggered a power crisis as temperatures jumped to record highs in northern India.

"The sluggish progress of the monsoon is certainly a concerning matter at the moment. A very large area of India, which includes northern, northwestern and western parts, has hardly received any pre-monsoon rain since June 1," Akshay Deoras, a meteorologist and researcher, told DW.

Deoras, who has accurately forecast several high-impact weather events, including deadly tropical cyclones, added that below-average rainfall is expected across most regions until June 20.

IMD officials have, however, sought to downplay fears of a delayed or erratic monsoon by saying that the country is likely to see a long-term increase in rainfall this year.

"The monsoon is now reviving and rainfall activities in most of India will increase from the week commencing in mid-June. Conditions are favorable for the monsoon's advance," said R K Jenamani, IMD senior scientist.