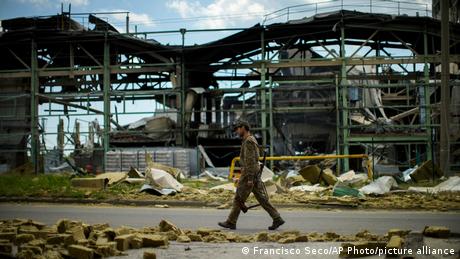 This article was last updated at 03:26 UTC/GMT

The Elysee Palace said Macron stressed in a phone call with Zelenskyy that France is on Kyiv's side in its battle against invading Russian troops.

France has already supplied Ukraine with Caesar Howitzers and trained Ukrainian soldiers to use them.

New French Foreign Minister Catherine Colonna said in May during a visit to Kyiv that a "concrete response" to Ukraine's demand for heavier weapons was coming.

Speaking to public broadcaster Deutschlandfunk radio, he said he would make the offer during a planned visit to Ukraine on Friday.

Lauterbach said Germany could treat people with severe burns as well as those who had lost limbs or suffered other injuries.

The health minister has not provided details of his itinerary. His trip at the invitation of the government in Kyiv follows visits made by other senior German politicians, including Foreign Minister Annalena Baerbock.

Putin compares himself to Peter the Great

President Vladimir Putin spoke of the need for Russia to "take back (territory) and defend itself" in a speech to mark the 350th anniversary of Tsar Peter the Great's birth.

Putin compared himself to the conquering monarch and drew parallels between Peter's founding of St. Petersburg and his own government's annexation of territory.

Peter the Great gave his name to St. Petersburg — Putin's hometown — that he ordered built on land he conquered from Sweden.

"When he founded the new capital, no European country recognized it as Russia. Everybody recognized it as Sweden,'' Putin said. "And Slavic people had always lived there along with Finno-Ugric people, and the territory was under the control of the Russian state.''

A senior adviser to Ukrainian President Volodymyr Zelenskyy rejected Putin's comments as an attempt to legalize the theft of land.

"The West must draw a clear red line so the Kremlin understands the price of each next bloody step ... we will brutally liberate our territories," Mykhailo Podolyak said in an online post.

A Ukrainian Foreign Ministry spokesman says the death sentences handed down by a pro-Russian separatist court to British and Moroccan nationals fighting in Ukraine should be considered null and void.

"The so-called 'trial' of the military personnel of the Armed Forces of Ukraine in the occupied Ukrainian territories is of no significance,'' Oleh Nikolenko told the Interfax Ukraine agency.

"Such show trials put the interests of propaganda above the law and morality; they undermine the mechanisms for the return of prisoners of war. The Ukrainian government will continue to make every effort to release all the defenders of Ukraine,'' he added.

The prisoners — Shaun Pinner, Aiden Aslin and Brahim Sadun — were detained in April in Mariupol. RIA Novosti reported that the prisoners are to be shot, but did not state when.

Nikolenko stressed that all foreign citizens fighting with Ukraine's armed forces should be considered Ukrainian military personnel and protected as prisoners of war.

The Ukrainian armed forces said its troops are still holding onto the key Donbas city of Sievierodonetsk amid heavy Russian attacks.

"The occupiers, with the help of motorized rifle units and artillery, conducted assault operations in the city of Sievierodonetsk. They were not successful; the fighting continues," the General Staff of the Armed Forces of Ukraine said in a update.

The Ukrainian military said it fought back Russian forces from the village of Toshkivkha, located near Sievierodonetsk.

What happened in Russia's war on Ukraine on Thursday

Ukrainian President Volodymyr Zelenskyy said millions could starve amid a Russian naval blockade of Ukrainian Black Sea ports. He said the world faces a "food crisis," as Ukraine is unable to export essential goods such as wheat.

On the ground, the Ukrainian military said it won back some ground in the southern Kherson region which had previously been occupied by Russian troops.

A self-proclaimed court in the "Donetsk People's Republic" sentenced two British citizens and a Moroccan national to death, according to Russian state-run media. The three men were fighting alongside Ukrainian troops and were arrested in Mariupol in April.

The UK's foreign minister criticized the death sentences as a "sham judgement."

German Federal Justice Minister Marco Buschmann told DW that Berlin is currently unable to prosecute Russian President Vladimir Putin over the war, as he is an active head of state.

You can revisit our updates from June 9 here.