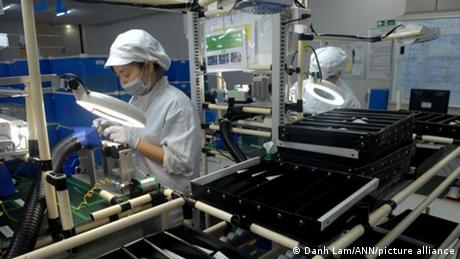 Vietnam was one of the few Asian countries that did not experience an economic contraction during the coronavirus pandemic in 2020 and 2021. This year,Vietnam's GDP is expected to grow by around 5.5%, according to the World Bank.

Vietnam's economic performance during and after the pandemic has captured the attention of some major European firms.

German automotive supplier Brose, which has 11 factories in China, is currently deciding between Thailand and Vietnam for a new production location.

In December, Denmark's Lego announced it will build a $1 billion (€935 million) factory near the southern business hub Ho Chi Minh City, one of the largest European investment projects in Vietnam to date.

"It currently looks as if, in particular, medium-sized companies are increasingly striving to enter the Vietnam market or are putting their activities out of China on a broader basis," said Daniel Müller, manager at the German Asia-Pacific Business Association.

Why are companies leaving?

On the geopolitical front, China's relationship with European governments deteriorated in 2021 when the EU imposed sanctions against China for its treatment of the Uyghur Muslim minority in the Xinjiang region.

Beijing then issued its own sanctions on EU officials and a previously agreed investment pact was put on ice.

In 2022, Beijing's ongoing "zero-COVID" policy has thrown global supply chains into disarray as production sits still in locked-down cities. This has also shaken the confidence of EU firms in China as a reliable production site.

Shanghai has only just recently re-opened after months of intense lockdowns, while parts of Beijing, the capital, have also been closed for months.

All of this has dented the economy and warnings have been raised that China could fall well below its GDP growth targets this year.

"Even prior to the pandemic, we have already seen businesses, particularly those in the labor-intensive manufacturing segment, starting to relocate out of mainland China to other lower-cost countries in the region, including Vietnam," Raphael Mok, head of Asia Country Risk at Fitch Solutions, told DW.

At the same time, Vietnam has become a more attractive destination for investors, he added.

Salaries are lower than in China and Vietnam has a fast-growing middle class. The Communist government is also investing heavily in infrastructure.

A report by Germany Trade & Invest, a research and advisory platform, points out that these pacts also give European firms easier access to public procurements in Vietnam. This includes public-private partnership projects, a favorite of the local authorities. Under the EVIPA, maximum foreign shareholding in commercial banks increased from 30% to 49%.

Why China is still essential

"Whether Vietnam will 'replace' China as a manufacturing option remains to be seen," said Matthijs van den Broek, of the Dutch Business Association Vietnam (DBAV). "But as an extended or additional investment location, in addition to China, or as part of a wider China-plus-One strategy, is definitely gaining ground," he told DW.

"China is too big and too advanced to not make any part of an Asian strategy," van den Broek added. "Vietnam is not yet on par with China as far as education level, skilled labor and infrastructure, and logistics are concerned."

Muller, of the German Asia-Pacific Business Association, noted that European decoupling from China depends largely on the where the business is located.

German companies, for instance, are much more reliant on the Chinese market than most other European countries. German exports to China were worth €99 billion in 2020, compared with €19 billion for France, according to OEC data.

"It is still unclear whether German companies, especially the large corporations, will significantly reduce their activities in China," Muller said. "This would be a prerequisite for countries like Vietnam to be able to count on large-scale new investments."

It will also be dependent on the types of industry in question. In the long-term, businesses in higher value-add manufacturing, such as advanced engineering and smart appliances, will still consider mainland China as a production hub due to its supply chains, said Mok.

But lower-margin manufacturing, which requires a low-cost and less sophisticated ecosystem, "will likely continue to shift out of the country to keep production costs low," he added.

According to Muller, if there is a further intensification of geopolitical tensions in the future, "companies will not be able to avoid looking for alternatives to China. Vietnam, he added, "will play a key role in this."