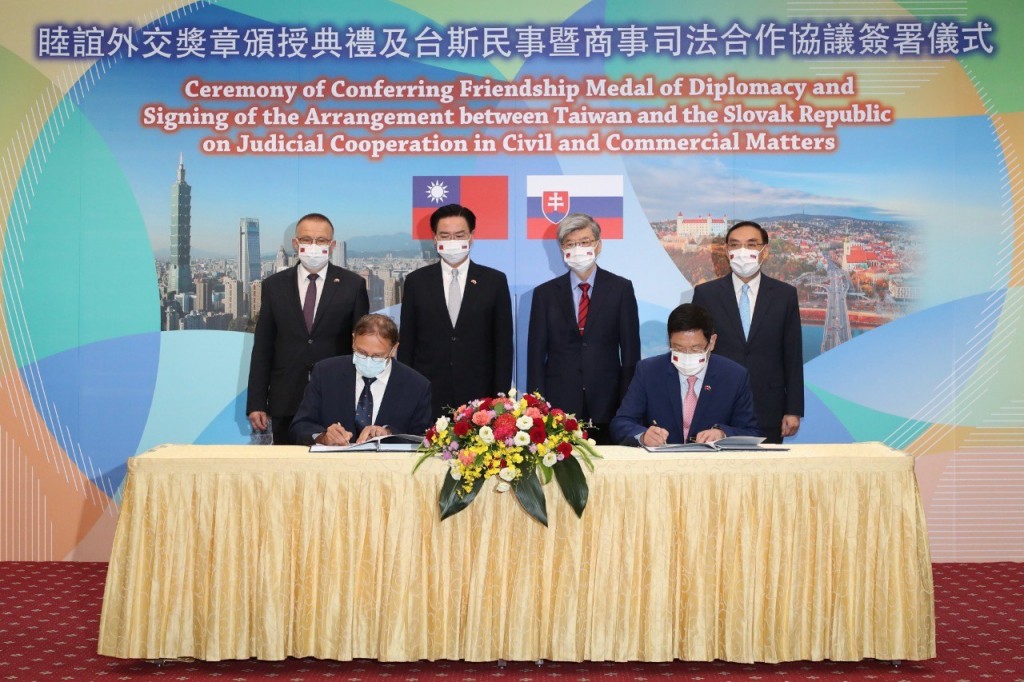 In a ceremony at the Ministry of Foreign Affairs (MOFA) building, Taiwan representative to Slovakia David Nan-yang Lee (李南陽) and Slovakia’s envoy to Taiwan Martin Podstavek signed the Arrangement on Judicial Cooperation in Civil and Commercial Matters. Foreign Minister Joseph Wu (吳釗燮) and the members of the visiting Slovakia parliament delegation, including Deputy Speaker Milan Laurencik and head of the Taiwan Friendship Group, Peter Osusky, presided over the event.

Wu said in a speech that the agreement marks an “extraordinary milestone” and allows the two countries to cooperate more closely in judicial matters. He noted that this is the first such arrangement for Taiwan and the fifth agreement signed between Taiwan and Slovakia.

He said that the finalization of this deal highlights the democratic spirit and values Taiwan cherishes the most. With this agreement, “Taiwan is expanding its freedoms and rights of its people while also bolstering ties with European countries,” Wu added.

He expressed gratitude to all staff from both countries who made the arrangement a reality.

Laurencik said the signing of the agreement is “another great step in our mutual cooperation” that is intended to improve the lives of both countries’ citizens. He added that the deal will only strengthen the friendship between Taiwan and Slovakia.

The two countries previously signed the Arrangement on Judicial Cooperation in Criminal Matters in a virtual ceremony on Aug. 3. Under this deal, both sides "agreed to increase exchanges on laws, implementations, and prosecutions; further practical cooperation; and hold regular consultative meetings," according to MOFA.

Additionally, a separate conferment event was held before the signing ceremony, during which Osusky was awarded the Friendship Medal of Diplomacy by Wu.

Osusky said Taiwan deserves to be treated fairly by the rest of the world. He said he hopes one day, Taiwan will no longer need to wait for an invitation to the World Health Assembly.

Osusky also said he expects President Tsai Ing-wen (蔡英文) to visit Slovakia in the future and possibly meet with President Zuzana Caputova. He reminded Taiwanese to “never forget that we are connected by friendship and democracy.”