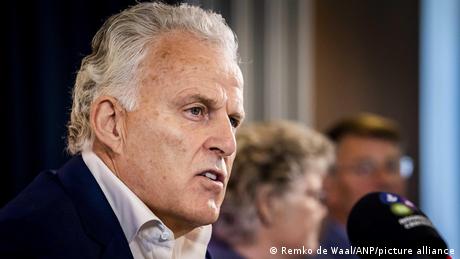 Two suspects appeared before a Dutch court on Tuesday over the killing of Dutch crime reporter Peter R. de Vries in a shooting that shocked the Netherlands.

The gun attack on the journalist, who died nine days later, has been linked to his investigation into an organized crime group whose alleged leader has been on trial.

What did the suspects say?

Police arrested a 21-year-old Dutch man and his getaway driver, 35, on July 6, shortly after de Vries was gunned down on an Amsterdam street. They were apprehended on a highway near The Hague, with the weapon used to shoot de Vries in the car.

The Dutchman, Delano G., is accused of shooting De Vries at close range. Speaking on Tuesday, he told the court he did not want to say anything. G. has so far refused to answer questions about his alleged involvement in the shooting.

His alleged accomplice, a Polish citizen known as Kamil E., is suspected of having driven the vehicle that was used. He denied a murder charge.

"My role in everything was only that of driver, I knew nothing about the murder and I did not murder anybody," he told judges.

De Vries's son and daughter were expected to make victim impact statements in the Tuesday hearing. The suspects' lawyers are scheduled to speak at a separate hearing next week and judges are due to deliver their verdicts on July 14.

If convicted, Delano G. faces a maximum sentence of life imprisonment. He has so far refused to answer questions about his alleged involvement in the shooting.

In a preliminary hearing last October, the Amsterdam District Court was told the main details of the police investigation. That hearing did not evaluate evidence over the killing.

Experts think that the murder could have been committed by the same organized crime group that de Vries had been investigating, which is currently involved in a 16-person court case.

Prosecutors have branded the gang, whose alleged leader Ridouan Taghi is currently on trial in Amsterdam, a "well-oiled killing machine."

Dutch Prime Minister Mark Rutte called de Vries's shooting "an attack on the free journalism that is so essential for democracy, our constititutional state, our society."

What is De Vries' legacy?

The 64-year-old reporter became a court reporter in the 1980s, going on to dive deep into the world of organized crime in the Netherlands.

He became a household name in the country due to his reporting on the 1983 kidnapping of billionaire beer magnate Freddy Heineken.

De Vries helped solve various "cold cases" and tried to clear the names of people convicted for crimes they did not commit.

His frequent appearances on national television shows garnered him fame and a reputation for seeking justice.

Despite receiving countless death threats, he had turned down police protection.

After his death, mourners queued for hours on July 22 to pay their respects at his coffin.