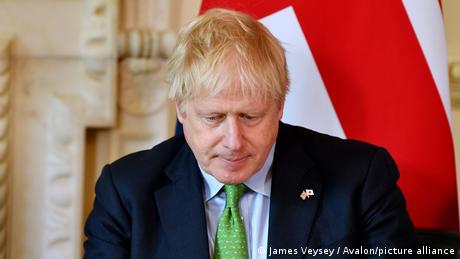 British Prime Minister Boris Johnson faces a vote of no-confidence from his Conservative Party on Monday.

Johnson has faced months of accusations over parties at his home and offices while the rest of the country was observing strict COVID-19 lockdown restrictions. The prime minister apologized for the parties, but maintained that he did not knowingly breach his own government's lockdown rules. An official report said the parties amounted to "failures of leadership" in the prime minister's office.

A challenge can be triggered if 15% of the Conservative MPs write a letter to the chairman of the influential 1922 Committee — the parliamentary group of all backbench Conservative lawmakers — demanding a vote of confidence in the leader.

The party currently has 359 MPs, meaning 54 would have to submit a letter. Graham Brady, chairman of the 1922 committee, announced on Monday that the threshold had been exceeded.

Does Johnson have any support?

A number of high-profile members of his Cabinet pledged their support, including Foreign Secretary Liz Truss. Cabinet member Michael Gove also expressed his support for Johnson.

What happens during a confidence vote?

All Conservative MPs can vote, either in favor of or against the leader staying on. Johnson would need a simple majority to win. It would take at least 180 votes of no-confidence to remove Johnson from office.

What happens if Johnson wins?

In the event of a victory, Johnson remains in office and gets immunity from another formal challenge for a year. However, if he fails to win convincingly, he could decide to step down as party leader.

And if Johnson loses?

If he loses the simple majority party vote, Johnson would then have to resign and is barred from standing in the ensuing leadership election. That process could take up to six weeks, during which Johnson would be expected to fill the role of caretaker prime minister until his eventual successor took over. A general election would not automatically be triggered.