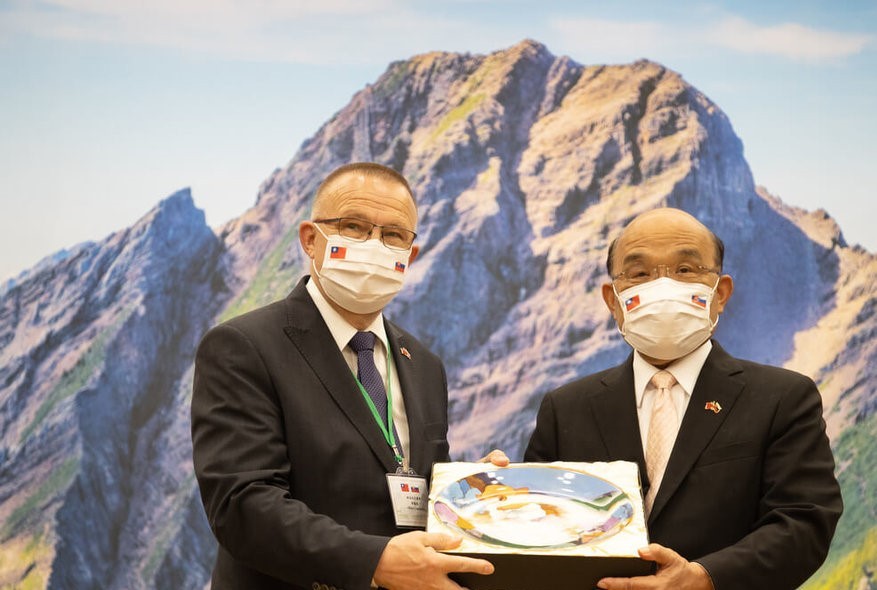 TAIPEI (Taiwan News) — Deputy Speaker Milan Laurencik of the Slovakian parliament on Monday (June 6) met with Taiwan Premier Su Tseng-chang at the Executive Yuan where the two highlighted the increasingly warm relations between the two countries.

Su said in a speech that Taiwan adheres to the universal values of freedom, democracy, and human rights. It has not only successfully fought the epidemic but also achieved the best economic results in 11 years, he noted.

Taiwan and Slovakia have had good interactions, Su said, adding that the National Development Council led a 66-member delegation to Slovakia in October, and it was very well received.

Su said that Slovakia's deputy minister of the economy was not afraid of China's coercion and flew directly to Taiwan to ink agreements related to economics and trade during a visit in December. The premier thanked Slovakia for supporting Taiwan's participation in the World Health Assembly (WHA) and other important international organizations.

Laurencik expressed gratitude to Taiwan for its mask donations and said Slovakia sent vaccines to the East Asian nation to return the favor.

He said Taiwan is an important economic partner of Slovakia—far more important than China. Slovakia is concerned about Chinese expansionism and believes countries friendly to Taiwan should see how the global democratic community reacted to Russia when it invaded Ukraine.

“Slovakia has an obligation to stand with the democratic community for the greatest benefit of the people,” the deputy speaker said.

Juraj Droba, President of the Bratislava Region, said that he is looking forward to signing a partnership agreement with Kaohsiung so that both sides can work closely in science, technology, and education. Praising Kaohsiung City Mayor Chen Chi-mai (陳其邁), Droba said the southern port city is very good at choosing partners.