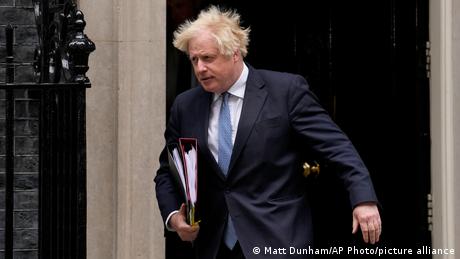 UK premier Boris Johnson is set to face a vote of no-confidence in his leadership on Monday evening, according to a senior official within his Conservative Party.

Johnson has been fending off accusations of multiple breaches of ethics in the past months, most notably over the repeated breaking of his own government's COVID-19 lockdown rules at parties in government buildings.

What has triggered the vote?

Tory party official Graham Brady, who is chairman of the party's 1922 Committee, says he has received the necessary 54 letters demanding a vote on Johnson's leadership to trigger one.

"The threshold of 15% of the parliamentary party seeking a vote of confidence in the leader of the Conservative Party has
been exceeded," Brady told Conservative lawmakers in a note.

"The votes will be counted immediately afterwards. An announcement will be made at a time to be advised," Brady added.

An internal report last month criticized the "senior leadership team" at Johnson's Number 10 Downing St. offices for parties that occurred there while the UK was under lockdown restrictions.

While the prime minister has apologized, he has repeatedly insisted he did not knowingly breach pandemic lockdown rules.

London's Metropolitan Police issued more than 100 fines to people who attended the gatherings, including Johnson and his wife, Carrie, at at the prime minister's Downing St. offices and residence. The parties took place at a time when such events were banned under coronavirus lockdown rules.

What happens after the vote?

Should Johnson lose the vote among the 359 Conservative lawmakers, he will be replaced as both prime minister and Conservative Party leader. A win would make him safe from any fresh challenge to his leadership for the next 12 months.

A spokesperson for Johnson said the vote was a chance to end months of speculation that would allow the government to draw a line and move on.