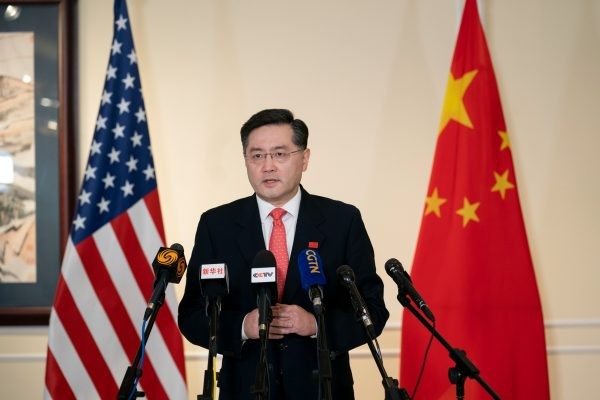 TAIPEI (Taiwan News) — Taiwan’s Mainland Affairs Council (MAC) on Monday (June 6) refuted claims made by China's Ambassador to the U.S. Qin Gang (秦剛) that Taiwan has been part of China for thousands of years.

Speaking at the Texas branch of the Asia Society on Thursday (June 2), Qin claimed Taiwan has long been a part of China, more than 1,500 years before the founding of the U.S., Liberty Times reported.

He said the “one China” policy is the cornerstone of Sino-U.S. relations and urged the U.S. to abide by the three Sino-U.S. joint communiqués and not support Taiwan independence. This is the key to resolving current China-U.S. tensions, Qin added.

The diplomat also said the main purpose of the China policy speech delivered by U.S. Secretary of State Antony Blinken last month was to call on allies to launch a “comprehensive and fierce” strategic wave of competition with China. Qin said he considers this a serious misunderstanding and misjudgment of the situation.

Qin noted that the two countries do have some healthy and fair competition in certain areas. Bilateral relations should be driven by mutual interests and result in win-win situations, he said, adding that cooperation is the only option.

The two countries must first acknowledge their differences, then manage, resolve and transcend these differences, he said.

MAC blasted his comments, saying he contradicted the facts and referred to ancient dynasties with no historical evidence to prove his claims.

The council said that the sovereignty of Taiwan is clear and consistent. The political status quo, the basis of international law, and the history involved are solemn facts, and it is the common will of Taiwan's 23 million people, it said.

MAC stressed that the "one China” policy that Beijing has repeatedly used to mischaracterize Taiwan is strongly opposed by both Taiwan and the international community. Taiwan firmly defends its national sovereignty and democracy, and will never tolerate coercion, the council said.

“We call on the Chinese Communist Party to face up to reality to improve cross-strait relations pragmatically and rationally, and stop creating false narratives,” MAC said.