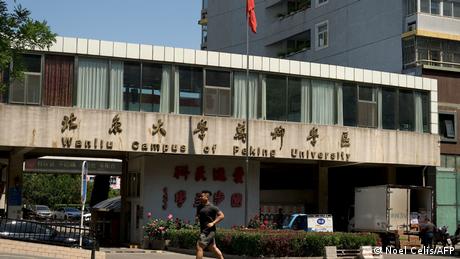 University students in Beijing have been staging protests against pandemic control measures over the past few weeks, demanding freedom of movement. Meanwhile, Shanghai is easing strict pandemic measures following more than two months of lockdown.

The news spread via a WeChat group, a Chinese social media platform. Soon, around 200 students massed outside the dorm, demanding that the school remove the barrier. Some tried to tear down the wall as others cheered them on.

The wall would have limited students' movement to the compound, but allowed staff to freely move in and out of the campus.

In video footage posted online, the vice president of the university is seen trying to communicate with the angry students, telling them he is trying to safeguard the school.

"Is this what you call protection? What about our rights?," a student can be heard yelling.

The school university has since reportedly removed the metal barrier and promised to let students travel in and out of the campus.

A few days later, reports emerged on social media platforms including Twitter that hundreds of students gathered on the campus of Beijing Normal University to express their dissatisfaction with the school's COVID pandemic control measures.

Hong Kong newspaper South China Morning Post reported that the students appeared to be demanding that the university release definite dates for their final exams, ensuring that they could leave the campus and go home.

Protests ahead of Tiananmen Square anniversary

"Normally, most people in China will choose to self-censor if situations are not too bad, so the fact that some students decided to protest against the pandemic-control measures on college campuses shows they think there are big problems with the policies," Wang told DW.

Teng Biao, a US-based Chinese human rights lawyer, said university students in China "have played an important role in many democratic movements in the country." "But since Xi Jinping came to power, Beijing has increased its control over civil society, the internet, and even universities," he told DW.

June 4 marks the 33rd anniversary of the Tiananmen Square Massacre in Beijing. In 1989, hundreds of thousands of protesters, including many college students from Peking University and Beijing Normal University, gathered in Tiananmen Square for weeks, demanding greater freedom of speech.

At first the government didn't know how to respond, with party members in disagreement. The hard-line faction, however, won the debate on how to handle the large-scale protest.

On June 3 and 4, troops began to move towards the square, opening fire and arresting protesters to regain control of the area. The Chinese government said 200 civilians and several dozen security personnel had died, but analysts estimate casualties were much higher.

"It's now more difficult and riskier to organize protests in China, so the recent protests on Chinese college campuses deserve some recognition, even if they aren't directly aiming at China's political system," Teng stressed.

Wang from HRW said Chinese authorities have learned a lot of "lessons" from the Tiananmen Square Massacre. One of them is to prevent any sign of protests from escalating.

"In addition, Beijing's internet censorship has suppressed the idea of freedom and democracy, and compared to 33 years ago, it's very difficult for Chinese students to access Western ideas now," she told DW.

Teng explained that over the past decades, the Chinese government has used advanced technologies such as artificial intelligence and facial recognition to surveil and control civil society in China. "The practice has brought China's totalitarian system to a new level."

Since the start of the COVID-19 pandemic in 2020, China has deployed high-tech pandemic control measures such as a special health code as a way to trace contacts and predict COVID risks of individuals across the country.

The code, which shows an individual's COVID-19 status through an app that requires real-name registration, can restrict the freedom of movement of individuals deemed as having been exposed to the virus.

"Even if the pandemic comes to an end, these measures will continue to exist," Teng said. "Although the Chinese Communist Party (CCP) didn't think of this at the beginning of the pandemic, it has realized over time that these measures are a powerful means to maintain stability."

Zhou Fengsuo, a former Tiananmen student leader who now lives in the US, believes there is still space for civil society to protest.

"People still tried to resist by banging pots or sharing viral posts on social media during the lockdown," said Zhou. "The resistance shows that even under the government's oppression, people can still self-govern and self-help."