TAIPEI (Taiwan News) — The U.S. Department of State has once again reworded its description of U.S.-Taiwan relations on its website.

On May 5, the State Department updated its online U.S.-Taiwan relations fact sheet, minimizing references to the 1979 Joint Communique and deleting mention of the U.S.’ recognition of Taiwan as part of China. It also removed the sentence, “The United States does not support Taiwan independence,” replacing it with, “we have a robust unofficial relationship as well as an abiding interest in maintaining peace and stability in the Taiwan Strait."

On Saturday (May 28) the fact sheet was revised again, emphasizing, “The United States approach to Taiwan has remained consistent across decades and administrations.” It also added, “We oppose any unilateral changes to the status quo from either side; we do not support Taiwan independence; and we expect cross-strait differences to be resolved by peaceful means.”

The State Department also wrote in the revision that the U.S. “maintains our capacity to resist any resort to force or other forms of coercion that would jeopardize the security, or the social or economic system, of Taiwan.”

The reinsertion of the U.S.’ stance on Taiwan independence reflected Secretary of State Antony Blinken’s remarks on May 26, when he gave a speech on U.S. policy towards China, per an earlier report. Blinken said U.S. policy toward Taiwan had not changed and the country stands by its “one China policy,” though he also acknowledged that what has changed is Beijing’s growing coercion toward Taiwan.

During a press conference in Tokyo on May 23, U.S. President Joe Biden affirmed the U.S. would be willing to use force to intervene if China were to invade Taiwan, adding, “That’s the commitment we made.” The rare explicit statement, in addition to the State Department’s revision of the U.S.-Taiwan relations fact sheet earlier in the month, led the world to question if the U.S. was beginning to take a different approach to the Taiwan issue.

CNA reported that an anonymous spokesperson in the State Department “strongly denied” that China’s protests or pressure led to the fact sheet revision and reintroduction of the U.S. not supporting Taiwan independence. 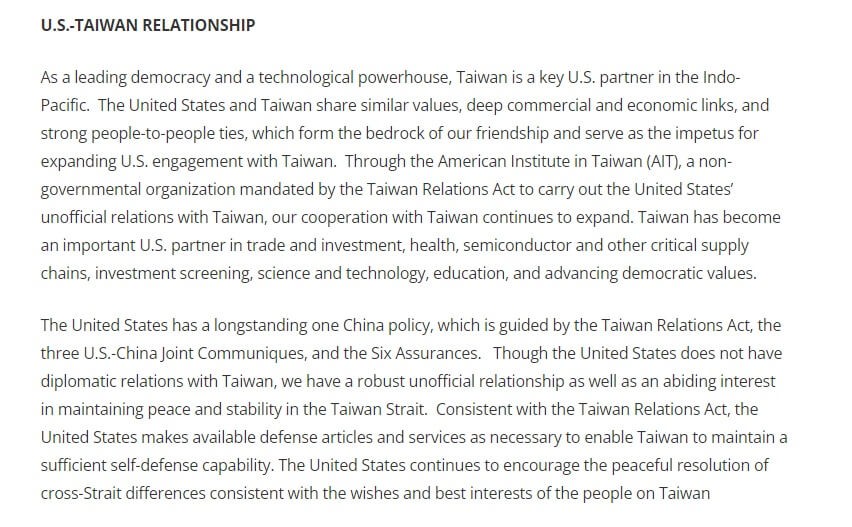 Screenshot of the State Department's description of U.S.-Taiwan relations after it was revised on May 5. (U.S. Department of State screenshot)