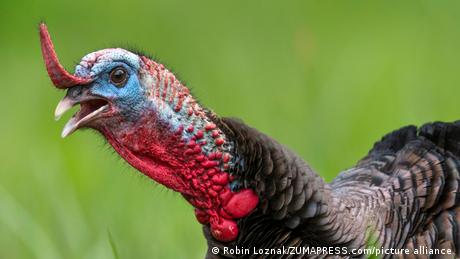 On Wednesday, the United Nations announced that Türkiye will replace the name Turkey, whenever the country is referenced.

"Türkiye is the best representation and expression of the Turkish people's culture, civilization and values," Turkish President Recep Tayyip Erdogan said last December when his government released a memo about the name change.

The rebranding may be related to Erdogan's apparent annoyance over the country's unflattering association with the bird. As the country's geopolitical role grows, Turkey has reportedly become more image-conscious, and Erdogan's sensitivity about how the country is perceived also likely ties into his nationalist tendencies.

Incidentally, turkeys (the bird, that is) actually derive their name from Turkey (the country) as guinea fowl — originally imported to Europe through Turkey — were called turkey-hens. Colonists then also applied this name to the much larger bird from the Americas.

The Dutch government also overhauled its image by ditching the name Holland. As of 2020, business leaders, the tourism board and the central government all refer to the country as the Netherlands.

Now North Holland and South Holland are just two of 12 provinces in the European country.

The name change is reportedly part of a push to get away from the country's association with recreational drug use and legal prostitution, a potent pull factor for foreigners to the Dutch capital Amsterdam, which lies in the province of North Holland.

It's not clear what will happen to the domain name Holland.com, which is still the Dutch tourism agency's landing page.

North Macedonia sought to improve relations with Greece, with its sights on joining NATO and the EU. Greece had long disputed use of the name Macedonia for the neighboring country, as that is also the name of a geographical region in Greece. Macedonia was also an ancient Greek kingdom. The naming dispute even contributed to instability in the region.

Greece had preferred that the Balkan country relinquish all use of the term, proposing the names "Vardar Republic" or "Republic of Skopje" instead. But after lengthy negotiations, North Macedonia it was, with the name for its official language and citizens remaining Macedonian.

In April 2018, King Mswati III renamed Swaziland to Eswatini, underscoring the ruler's bid to ditch the country's colonial name. It is said that the king was also unhappy with how Swaziland was confused by some for Switzerland. Announced on the 50th anniversary of the African country's formation, Eswatini — the nation's pre-colonial name — means "land of the Swazis" in their language.

Again it's marketing that is behind the name change of the central European country, Czech Republic. In 2016, the Czech government officially changed its name to Czechia, along with a recommendation to promote this short version in international contexts.

Just as France's official name is the French Republic, the Czech Republic could be Czechia, the reasoning goes. And Czechia is an easier name to attach to products.

Although the EU, UN and some big companies refer to it as Czechia, the name has not quite caught on internationally. Perhaps one reason is that Czechia could too easily be confused with Chechnya, a Russian republic in the Caucasus.

In 2020, Czech Prime Minister Andrej Babis told The Wall Street Journal that he did not like the name Czechia at all.

This island nation, located in the Atlantic Ocean about 700 kilometers (440 miles) off the coast of Senegal, lodged its official request for a name change in 2013.

Previously called Cape Verde, this is a partial Anglicization of the original Portuguese "cabo verde," which means "green cape." Although it is not a cape, the archipelago sits just beyond the westernmost point of the African continent.

Practical reasons are also likely behind this name change. The culture minister at the time said the country sought a standardized name that did not need to be translated. He added that he hoped Cabo Verde would conjure positive associations with sun and sea and happy people.

Like Eswatini, Sri Lanka changed its name to break from colonial associations.

Although the official name change was made in 1972 when it became independent from British rule, it was not until 2011 that Sri Lanka officially wiped the old colonial name Ceylon from government use.

However, the popular Ceylon Tea label has remained.