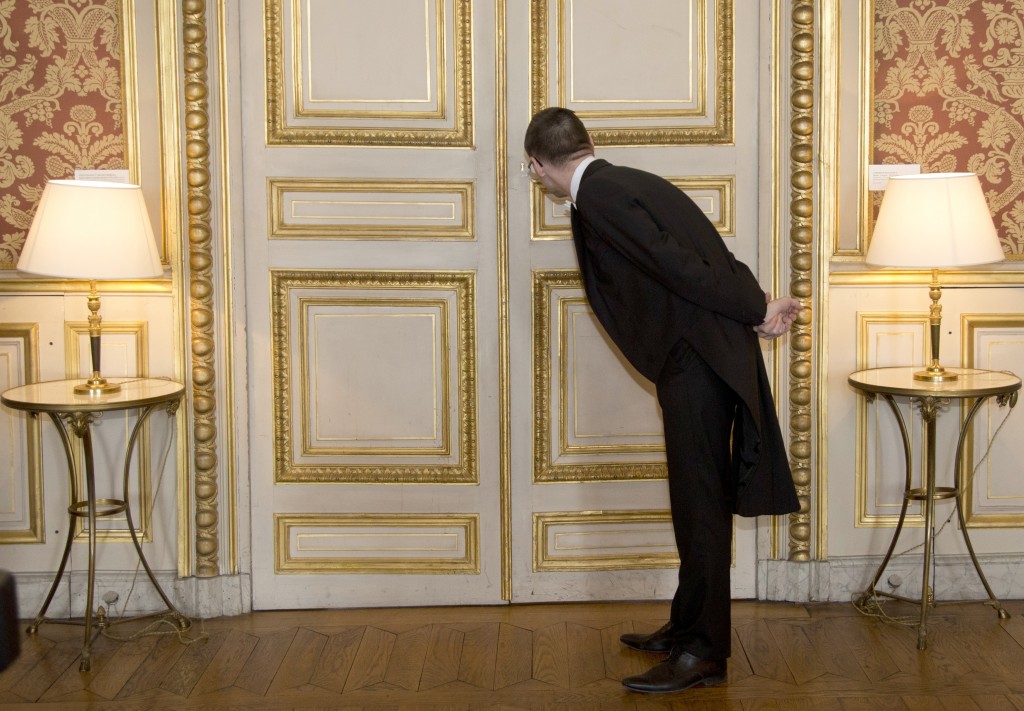 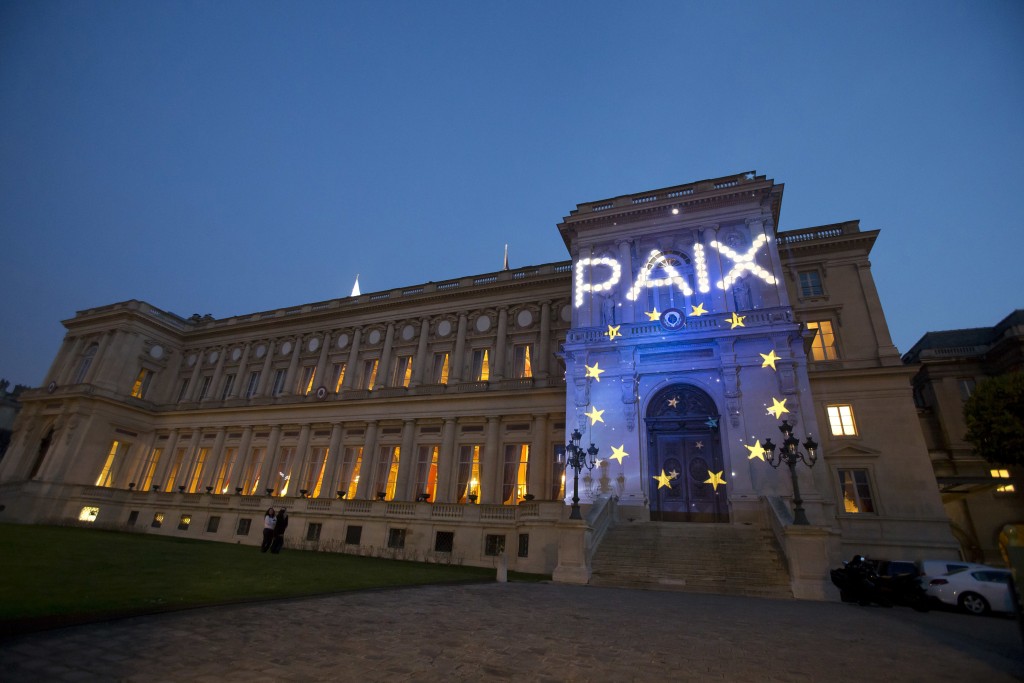 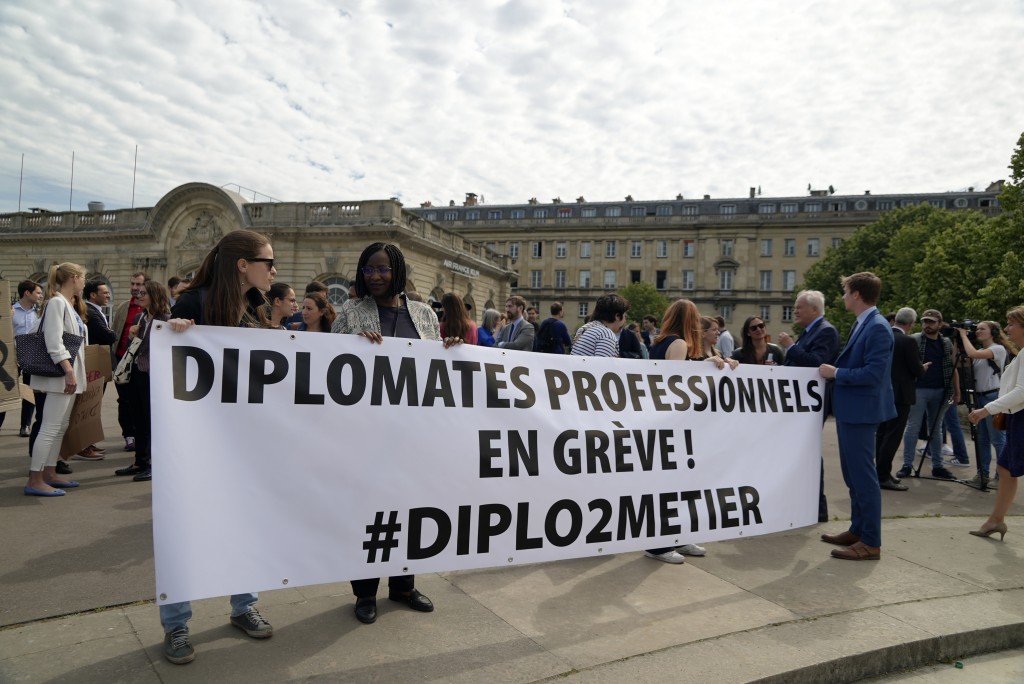 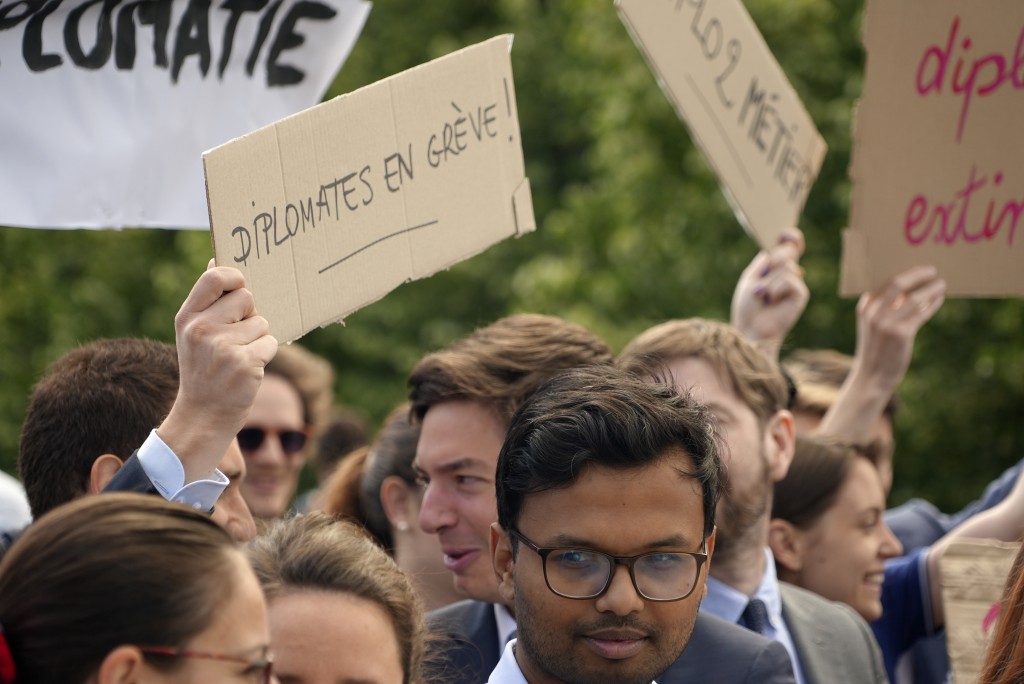 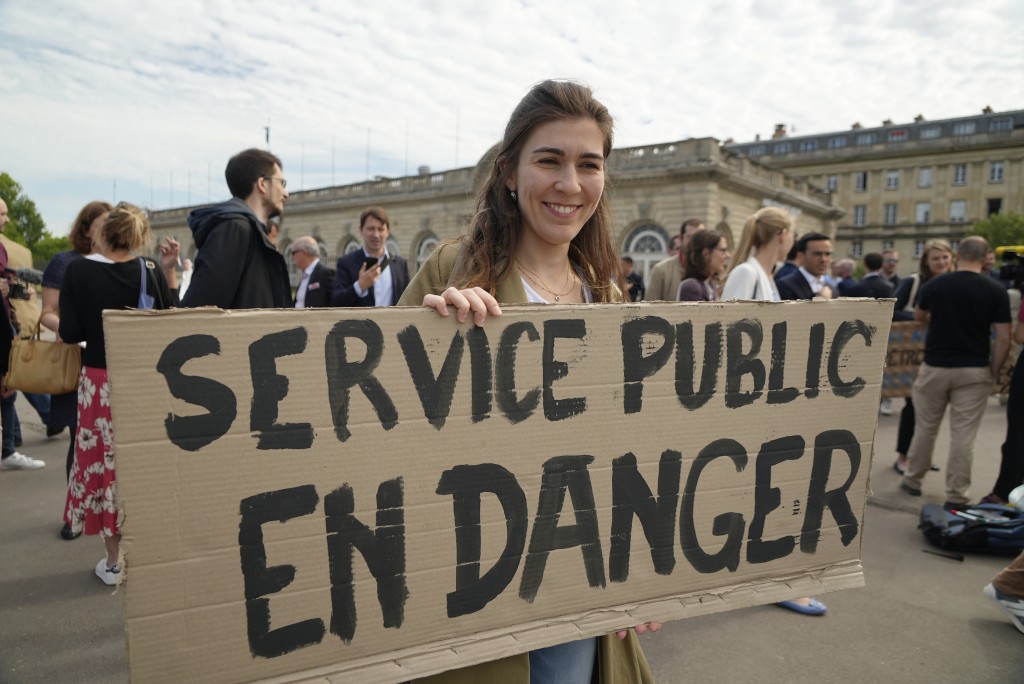 PARIS (AP) — Members of the French diplomatic corps dropped their traditional reserve on Thursday to go on a rare strike, angered by a planned reform they worry will hurt their careers and France’s standing in the world. It was the second such strike in nearly 20 years.

About 100 diplomats dropped the veil of invisibility that often defines their work to demonstrate in full view of the imposing Ministry of Europe and Foreign Affairs, the home base for the foreign service. In overseas posts, ranging from Tokyo to the Middle East and Washington, numerous diplomats, including some ambassadors, honored the day-long strike.

They want President Emmanuel Macron to scrap a plan to merge career diplomats with a larger body of civil servants, starting in January, or at least hold a dialogue.

The plan, announced by Macron in an April decree, will reportedly affect about 800 diplomats. Opponents claim that’s just the beginning.

“We risk the disappearance of our professional diplomacy,” a group of 500 diplomats, wrote in a commentary published last week in Le Monde newspaper. “Today, (diplomatic) agents ... are convinced it is the very existence of the ministry that is now being put into question.”

The planned change comes amid the war in Ukraine and complex negotiations over Iran’s nuclear program, and while France holds the European Union’s rotating presidency.

Newly-appointed Foreign Minister Catherine Colonna, herself a career diplomat, has not commented. However, she will meet Tuesday with unions and representatives of the protest movement for an initial “listening” session, the ministry said.

Demonstrators held a large banner reading “Professional Diplomats on Strike” during the protest across from the ministry, known as the Quai d'Orsay for its location by the River Seine.

“To say that diplomacy is in danger, that word may be too strong,” said Maurice Gourdault-Montagne, a former ambassador to China, Japan and Britain, who was taking part in the public protest near the ministry. But, he added, “diplomacy will be weakened,” at a time when those skills are especially needed.

"To become an ambassador, before getting to the top of the ladder, it is necessary to actually tick some boxes," said another demonstrating diplomat, identifying himself only as Benjamin. "And this reform supports the idea that there is no need for such skills." Like others not yet at the top rung, he declined to give his full name.

The government reform is meant to modernize and diversify France's diplomatic corps, created in the 16th century, and to bring down the walls of what some in the government see as an elite institution turned in on itself.

It will put diplomats into a large pool from all branches of public service, encouraging switches to other ministries and forcing personnel to compete with outsiders for prized diplomatic posts.

Diplomats contend their job requires specialization and expertise acquired over years in posts around the world — and has no room for amateurs.

“Today, I am on strike,” Deputy Ambassador to the United States Aurelie Bonal tweeted. "Diplomats negotiate, talk, compromise. They generally do not go on strike."

Bonal raised yet another worry that protesting diplomats contend the change could generate: cronyism. “Without a diplomatic corps, it will be much easier for the (government) to appoint friends at all levels of diplomatic jobs,” she tweeted.

Dominique de Villepin, a former prime minister and foreign minister known for an eloquent 2003 speech at the United Nations in which he declared French opposition to the U.S.-led invasion of Iraq, labeled the pending reform in a tweet last month “A historic fault.”

For France, the loss of diplomats’ separate status in the civil service means “a loss of independence, a loss of competence, a loss of memory that will weigh heavily on the years ahead,” Villepin tweeted.

Even before Macron’s decree, frustration had festered in the Foreign Ministry’s halls over cuts in funding, personnel and outsourcing. The group commentary in Le Monde deplored “decades of marginalization of the ministry’s role within the (French) state” as well as “a vertiginous reduction” in personnel — down by 30% in 10 years, the diplomats claim. Funding, they said, is but 0.7% of the state budget.

The Twitter hashtag, #diplo2metier, shows a number of ambassadors around the world joining in or supporting Thursday's strike.

“I will be on strike ... to protest the reform of the diplomatic corps and the continued reduction of means for our diplomacy,“ French Ambassador to Kuwait Claire Le Flecher tweeted on her personal account.

Bonal, the deputy ambassador to the United States, said the job of diplomat is more than “gorging on Ferreros in touristic countries. The truth is we also visit morgues & jails; we work very late hours, not always in safe countries," she tweeted. “It’s a vocation, not a 3-year experience.”

Bonal said she was among those who went on the first such strike in 2003, a protest over budget cuts.