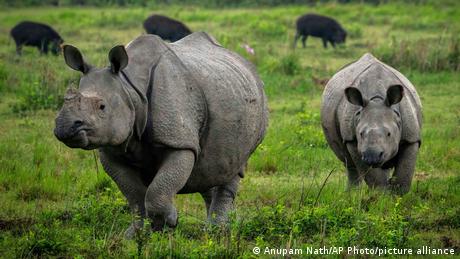 Last month, West Bengal's forest officials rescued three kangaroos in the forests of Jalpaiguri district and recovered the carcass of another.

Though the rescued kangaroos were finally sent to the Bengal Safari Park, wildlife officials believe they were almost certainly born in breeding facilities in Southeast Asia and smuggled overland.

The animals are the latest exotic creatures to be smuggled into India, possibly to be used as pets. Their smuggling exposes the loopholes in the roaring wildlife trade in South Asia.

"This is the second time kangaroos have been found in north Bengal. A probe has now been initiated to investigate how the animals reached the forests, and from where," Hari Krishnan, a divisional forest officer, told reporters.

The lowland forest region at Gajoldoba Forest, where the kangaroos were found, is surrounded by Bangladesh to the south, Nepal to the east, and Bhutan to the north.

Wildlife conservationists maintain that over the years, the illegal wildlife trade has emerged as a form of organized transnational crime that threatens the existence of many wild species across the globe.

Just last week, over 400 caged exotic animals including three-toed sloths, beavers, snakes, rare lizards and pottos (a small primate) were seized in one of the largest consignments in the northeastern state of Mizoram, along the border with Myanmar.

A week prior, customs authorities in the southern city of Chennai thwarted two attempts to smuggle wild animals from Thailand on two consecutive days.

Acting on a tip, the authorities intercepted a passenger, who had arrived from Bangkok. They then recovered an albino porcupine and a white-lipped red-chested tamarin (a squirrel-sized monkey species) from his baggage. In a separate incident, authorities rescued a sugar glider (possum) that was concealed in a container, which was placed inside the baggage of a passenger.

"This is a lucrative market and smuggling happens. For every item of contraband seized, there are many more which pass by undetected into India, as there is no law governing the possession, trade and breeding of exotic animals," Tito Joseph, program manager of the Wildlife Protection Society of India, told DW.

Lack of legal protection for wildlife

Unfortunately, the trade in exotic species does not fall within the purview of the 1972 Wildlife Protection Act, leaving a gaping legal hole in India's wildlife protection system. This is well exploited by those involved in various levels of the wildlife trade.

Markets trading in live exotic wildlife are even operating online and apprehending illegal traders and poachers has so far been an enormously ineffective endeavor.

The exotic birds and rare animals are first caught in the jungles of Brazil, Malaysia, Singapore, Thailand, Papua New Guinea, Australia, New Zealand, and some countries in Africa. They are then caged, sent out on cargo ships, and sent to India on fishing boats or by air.

"India has also seen a rise in demand for exotic animals. Animals from Thailand, Malaysia and other top tourist destinations in Southeast Asia are being smuggled into the country," said Joseph.

Many experts feel that the frequent seizure of exotic animals indicates a growing international trade and increasing demand for wet markets in the region.

"Traders and traffickers have been exploiting this legal shortfall to the fullest," Subbiah Nallamuthu, a leading wildlife filmmaker, told DW. "Exotic species of birds are now trafficked into India's black markets. Since it is well organized, it is hard to gauge the real scale and scope of the trade."

According to the World Wildlife Fund (WWF) of India, diverse products including mongoose hair, snake skins, turtle shells, musk pods and bear bile are bound for the international market and have no direct demand in India.

Large quantities of ambergris , a waxy substance that comes from a whale's digestive tract , have been seized from various parts of the country over the last two years. Ambergris is used in the West to stabilize the scent of fine perfumes.

"I agree there is a gap in the law and it will be plugged very soon. But one of the reasons why there have been more seizures is also that more institutions are becoming aware of exotic animal smuggling," H V Girisha, the deputy director of the Wildlife Crime Control Bureau, told DW.

India has also been a member of the CITES (Convention on International Trade in Endangered Species of Fauna and Flora) since 1976. CITES is an international agreement between governments that aims to ensure that international trade in wild animals and plants does not threaten their survival.

'Penalties are too weak'

"But without political backing, disincentives for over-exploitation and illegal trade, such as penalties for legal infringements, are all too often weak," said the WWF.

According to the UN Environment Programme (UNEP), elephant tusks, pangolin scales, tiger skins and parts of Indian star tortoises are just some of the wildlife parts that have been confiscated at Indian airports, in part of a growing trend of exploiting airports to traffic illegal wildlife.

The 2020 World Wildlife Report found that 6,000 different species of flora and fauna were seized between 1999 and 2018. Suspected traffickers from around the world were identified, illustrating that wildlife crime is a global issue.

The latest report by UNEP's partner TRAFFIC, a wildlife trade monitoring agency, found that over 70,000 native and exotic animals and their derivatives were trafficked through 18 Indian airports between 2011 and 2020.

"India is among the top ten countries in terms of using the airline sector for wildlife trafficking," said Atul Bagai, head of the UNEP in India. "This is an unwanted accolade."