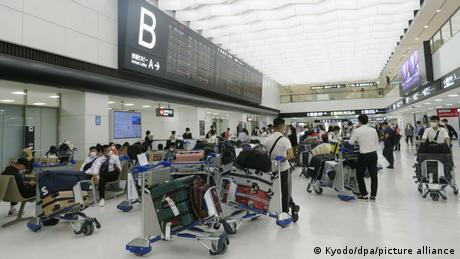 After more than two years of effectively banning foreign tourists in an effort to keep the coronavirus at bay, Japan is finally reopening to visitors. And that is timely given that a recent global study has placed Japan at the top of travelers' must-visit list.

On Wednesday, new regulations went into effect that lift the cap on arrivals from 10,000 travelers per day to 20,000 individuals.

Arrivals are also being categorized into one of three groups; blue for people with at least two vaccinations and from low-risk nations and yellow for medium-risk countries with three doses of the vaccine.

Anyone arriving from Albania, Fiji, Pakistan or Sierra Leone, even if they are fully vaccinated, fall into the red category and will be required to quarantine for at least three days.

Around 80% of arrivals will fall in the blue category, according to the government, including anyone coming to Japan from Germany.

Visitors are at present required to join approved tour groups and are being carefully monitored, but — if all goes according to plan — that requirement is due to be relaxed on June 10 and travelers will be given more freedom.

Japan's domestic travel industry is predictably delighted at the news and is hoping that further easing of the restrictions will be forthcoming soon.

"The pandemic has hit us hard,” said Kei Tamura, director of Kyoto-based Cerca Travel Co. "We went from being busy and fully booked months in advance to zero overseas tourists in a matter of weeks," Tamura told DW.

Tamura turned to Japanese travelers and foreign residents of Japan to keep his business afloat, although he admits it was touch-and-go at times. And not all companies did survive.

"We are still not able to accept reservations as the June 10 lifting of restrictions has not been absolutely decided," he said.

"So we are communicating with our old clients and partners and we are hopeful."

Like the rest of the industry, he has been heartened by Japan being ranked the top destination in a travel and tourism report compiled by the World Economic Forum.

Unveiled at the WEF meeting in Davos in late May, Japan took the top spot for the first time, ahead of the United States and Spain in third.

Rising from fourth position in the 2019 rankings, Japan was rated highly for its wealth of cultural resources and air and rail infrastructure.

In 2019, the last full year before the pandemic wreaked havoc on the world's travel sector, 31.88 million foreigners arrived in Japan.

The nation was on target to hit the 40 million mark set for the following year, when Tokyo was scheduled to host the Olympic Games.

Instead, the Games were postponed until the summer of 2021, tough new travel restrictions were put in place and Japanese opted to stay home instead of vacationing overseas.

According to government figures, less than 246,000 foreigners entered Japan in 2021, mostly athletes and media connected to the Olympics, business people, diplomats and some foreign students.

The annual figure was the lowest since statistics were first collected in 1964.

Still, falling infection numbers are raising hopes that the worst of the pandemic may be over.

Naomi Mano, president and CEO of boutique travel firm Luxurique, said her regular clients are "desperate to get back to Japan."

"Since the first reports came out in April that the government was considering easing back on the restrictions, we have received so many inquiries from people who want to get here again," she said.

"We are also seeing a lot of interest from people who have had Japan on their bucket list for some time but, for whatever reason, never got around to coming," she said. "Now, those people are making bookings because they don't want to wait any longer."

Luxurique is taking bookings from extended families or groups of friends who are making plans for Thanksgiving or Christmas in Japan, Mano said.

A typical itinerary takes in Tokyo and the cultural sights of the former capital of Kyoto.

Many are adding on the famous art installations on Naoshima Island, in Japan's Inland Sea, the world-famous ski slopes of Niseko in Hokkaido and, of course, some of the nation's "onsen" hot springs.

'Cooped up for two years'

"These people have been cooped up for more than two years, which they are not used to, and they have used that time to plan where they want to go and what they want to do," Mano said.

Another incentive to make Japan their first destination is the weak yen, which is making vacations cheaper than in previous years, she added.

The industry accepts, however, that there are going to be some bumps in the road before Japan's travel sector gets completely back to normal.

The government's pilot tourism plan was launched in late May for small groups of closely monitored travelers from a handful of nations.

It hit a bump on Monday when it was confirmed that one member of a group of four travelers from Thailand had tested positive for the virus and had been placed in an isolation unit in Oita Prefecture, in southwest Japan.

"It's going to take a little time," agreed Kei Tamura.

"I think this summer is too soon to expect large numbers of travelers to return, but I believe, and I hope, that by this time next year, we will once again be fully booked."