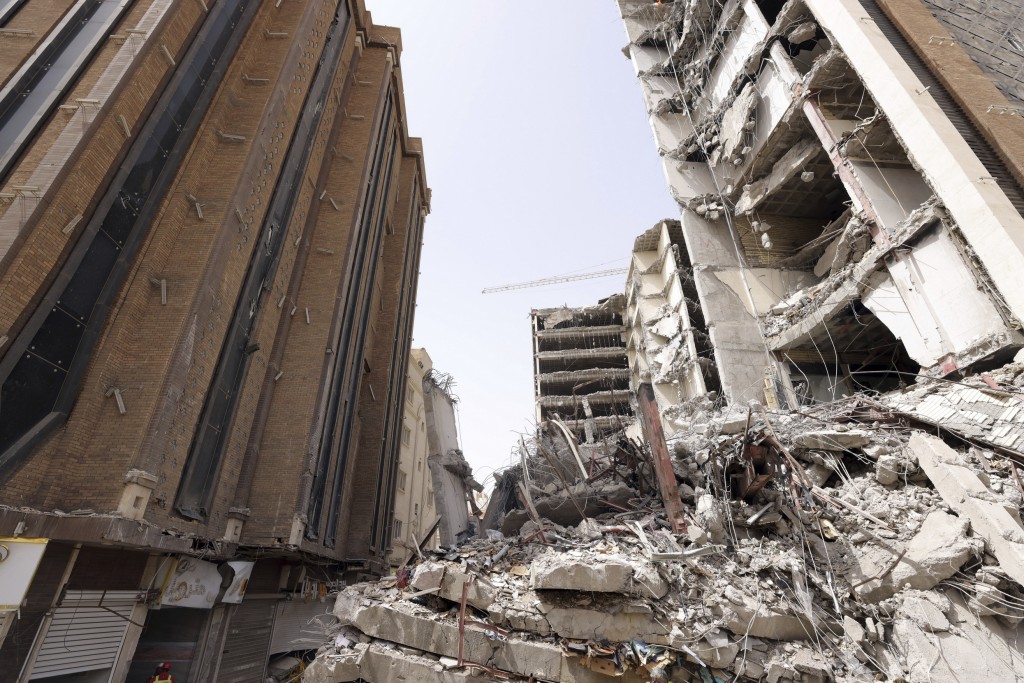 DUBAI, United Arab Emirates (AP) — Iranian authorities arrested a local journalist at a ceremony for the victims of a building collapse in the southwestern city of Abadan, an international press watchdog reported on Wednesday as the death toll from the disaster rose to 37.

The collapse has provoked a national outpouring of grief and outrage, adding to a series of mounting political and economic crises facing the Islamic Republic. With talks to restore Tehran's tattered nuclear deal still deadlocked, the Iranian currency tumbled in value on Wednesday to its lowest level ever against the dollar.

Traditional mourning ceremonies commemorating those killed when the still under-construction tower at the Metropol Building in Abadan collapsed last week have repeatedly turned turn into angry protests against top officials, according to footage shared widely online and analyzed by The Associated Press. Authorities have responded by dispersing demonstrations and disrupting internet access in an apparent effort to limit information on the ground.

Covering unrest remains highly perilous in a country which Reporters Without Borders describes as the third-worst in the world to be a journalist — behind only North Korea and Eritrea. Foreign-based Farsi-language television channels have described tear gas and other shots being fired as security forces dispersed demonstrations in Abadan. But the number of casualties and arrests overall remain unclear.

Last Thursday, at one of the ceremonies near the site of the building collapse, security forces detained freelance reporter Arash Ghaleh-Golab, who has written political commentary and editorials for various local publications, the Committee to Protect Journalists said.

During Ghaleh-Golab's arrest, security forces beat and kicked him, the New York-based advocacy group reported, adding that it was unclear whether he was covering the event as a journalist or attending as a private citizen. Most recently, his work was published state-run website Ensaf News.

Iranian authorities have not commented on the arrest. Iran's mission to the United Nations did not respond to a request for comment.

The collapse at the Metropol Building some 660 kilometers (410 miles) southwest of the capital, Tehran, has dredged up painful memories of past national disasters and shined a spotlight on shoddy construction practices, government corruption and negligence in Iran. It follows weeks of sporadic protests roiling the oil-rich but impoverished Khuzestan province over skyrocketing prices after the government cut subsidies for several food staples.

The value of the Iranian currency, the rial, has been weakening for years but tumbled to a record low of 318,000 rials for the dollar on Wednesday, from about 312,000 the day before. The sudden drop reflects growing anxiety over Iran's economy, ravaged by renewed American sanctions following the collapse of the 2015 nuclear deal and years of mismanagement.

Talks to restore the nuclear deal, which imposed curbs on Iran's atomic program in exchange for sanctions relief, have apparently stalled over Iran’s demand that Washington lift its terrorism designation on the paramilitary Revolutionary Guard. The rial was trading at 32,000 rials to the dollar at the time of the landmark nuclear deal.

As emergency workers pulled another corpse from the rubble in Abadan, bringing the death toll to 37, the governor of Khzuestan, Sadegh Khalilian, told state TV that he expects rescuers to find more bodies, based on the number of families still waiting in limbo for word of their loved ones.

The disaster has provoked sympathy across the country, with scores of Iranians still tweeting the Farsi-language hashtag “#Abadan is not alone” 10 days after the collapse.

Experts describe the disaster as coming at a particularly dire time for the Islamic Republic, when any spark could ignite built-up public anger.

“One big trigger alone — such as the rise in food prices or a building’s collapse — has the potential to turn some of these protests into social unrest,” said Adnan Tabatabai, an Iran analyst based in Germany who is the CEO of the Center for Applied Research in Partnership with the Orient.

That Iranian security forces appear to be cracking down on demonstrations instead of de-escalating tensions, “only exacerbates the level of anger and frustration among protesters, leading then to prolonged upheaval,” he added.

Satellite images analyzed by the AP on Wednesday confirmed that one of the two tankers remains off the coast of the port city of Bandar Abbas.

The Planet Labs PBC images from Tuesday showed the Prudent Warrior between Bandar Abbas and Iran’s Qeshm Island near the strategic Strait of Hormuz, the narrow mouth of the Persian Gulf through which a fifth of all the world’s oil traded passes. The location of the vessel also matched an earlier position offered by a satellite tracker briefly switched on by the ship’s crew.

It remains unclear where the second ship, the Delta Poseidon, is at the moment.

The Guard's seizure of the two tankers appears to be in retaliation for Athens’ assistance in the U.S. seizure of crude oil from an Iranian-flagged tanker earlier in the Mediterranean Sea over violating Washington’s crushing sanctions on Iran.