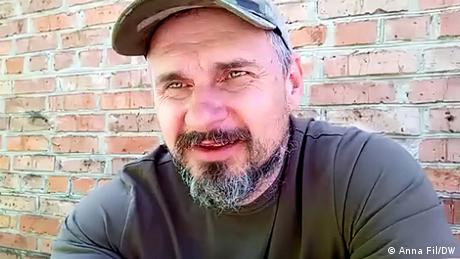 When Russia attacked Ukraine, Ukrainian film director Oleg Sentsov joined his country's Territorial Defense Forces and went to fight. Since 2014, Sentsov has been an icon of Ukrainian resistance to Russia's annexation of Crimea.

In May of that year, he was arrested by Russian secret services on suspicion of planning terrorist activities, and taken to Moscow. In 2015 he was sentenced to 20 years imprisonment and transferred to a Russian penal colony. Filmmakers from all over Europe called repeatedly for him to be released. Ukraine and the West deemed him a political prisoner. Oleg Sentsov was finally able to return to Ukraine in September 2019, when he was freed as part of a prisoner exchange.

DW: Mr Sentsov, you are currently in Donbas. What is the situation at the front right now?

Oleg Sentsov: I'm now in the most difficult stretch, outside Sievierodonetsk on the way to Bakhmut. This is the last part of the Luhansk region that the Russians haven't occupied, but they're trying with all their might, because they want to present some kind of victory – in this case, what they're calling the "liberation" of the Luhansk region.

In a video on Facebook, you say that members of the Ukrainian Territorial Defense Forces who are not well prepared for battle are being sent to the front.

That's not a rebuke, but a problem that needs to be solved, fast. Training needs to be improved in the hinterland, too, and here, along the second line of defense, and further back. There are enough people who want to go and fight, they're highly motivated, they just have to learn how it's done.

I've been at war for two months and I haven't yet fired a single shot. The warring parties are far apart, and they seldom engage using firearms. It's mainly artillery, mortars and rocket launchers, with the infantry just holding the positions. In these conditions, it's important to survive and not die, not get injured, not become a burden. So survival skills are very important at the front.

Why did you join the Territorial Defense Forces in the first days of the war?

You got an assault rifle from them straight away. It would have taken longer through mobilization, because at that time there wasn't yet any conscription in my district. I went to the Territorial Defense Forces immediately because they were handing out weapons. The situation was such that it was already clear there would soon be an invasion of Kyiv and fighting in the streets.

I've learned a lot in two months. This is a completely different war; it's about smart weapons, so it's important to get these weapons. We don't have enough of them; ours are outdated. Russia's are somewhat newer, but they don't have many. Here in Donbas, they're showing that they have a lot of ammunition.

They're using it to squeeze us out; we're being forced to retreat, and they are gradually occupying positions. They are scorching the earth and moving across it like a fire. You cannot stay there, because you'll burn. That's their strategy now. This is how they did it in Syria and Chechnya. In the first days of the war, they thought they could occupy Ukraine in convoys, just like that. But they didn't succeed, so they fell back on their old scorched-earth strategy.

How long do you think the war will last?

It's difficult to make predictions, but I think two or three years. We have to prepare ourselves for that. Because we don't just have to win here and stop Russia, liberate our territory, we also have to exert pressure on Russia to bring about regime change there. Otherwise the problem will remain. Even if there is a coup and Putin is replaced by Patrushev [Nikolai Patrushev, secretary of the Security Council of Russia – editor's note] or Shoigu [Russian Defense Minister Sergei Shoigu – editor's note] – even then the situation won't change; even then, Russia will still be a problem.

You spent five years behind bars in Russia as a political prisoner. Aren't you worried that history might repeat itself if you're captured?

Well, first of all, you can't be that unlucky twice. That would be a bit too much. I think that my time in prison is behind me, and that other ordeals await. Secondly, if I were captured, as a very special enemy, they're unlikely to let me live.

What awaits the Azovstal defenders who have been taken prisoner by Russia?

You have to remember the Russian narrative: its only message is about "Nazis" and "fascists," which is what is constantly used to justify this war. Now they will try to conduct a sensational trial in order to present a victory and justify the invasion. So I am not counting on there being a swift exchange of prisoners.

Perhaps the odd one or two will be identified as members of the Ukrainian armed forces or marines and handed over sooner. But the Azov regiment will be given a show trial, because Russia needs something for its domestic propaganda. Because there have not been any great victories, they'll say: "We defeated the Nazis in Mariupol."

The main thing is that they all stay alive, and are not executed or tortured. That isn't happening, as far as I know, because there are certain agreements that are being monitored by the Red Cross.

The Russian director Kirill Serebrennikov, who is regarded as a Russian dissident, has recently come under criticism. He spoke out at the Cannes film festival against a boycott of Russian culture, and in favor of assisting the families of Russian soldiers. What do you think of this?

Because Russia is responsible for all the crimes. The blood of the murdered children of Bucha, the tortured men and raped women, is on the hands of every Russian – those who did these things, those who sent them there, those who support it or remain silent, but also Kirill Serebrennikov, who says Russian soldiers must be helped. As far as I'm concerned, the blood of innocent victims is on all their hands. They will never be able to wash them clean.

How does the war affect your creative work?

My creative plans have not changed. There's a screenplay for a film. My partner Denis Ivanov was in Cannes and is trying to raise co-financing for the Ukrainian social drama "Kai," and for our project in English, "Shining World." This is a children's story for grown-ups that I wrote in a cell in a Russian prison. When I have an idea, I think about it for a while, it lives inside me, and after a few months or years it becomes a screenplay. I have an idea for a big film about Azovstal. But I won't stand behind the camera until the war is over. Only after the victory…

This interview was conducted in Ukrainian on May 26, 2022.