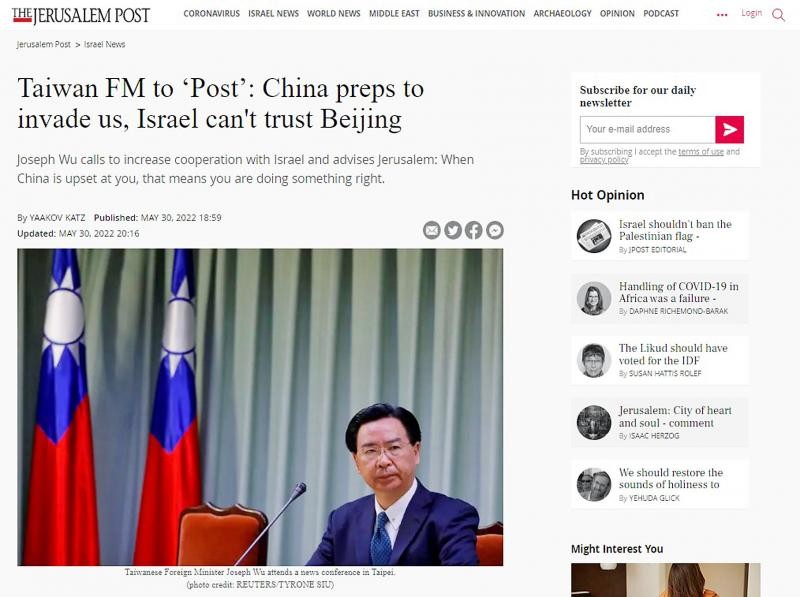 TAIPEI (Taiwan News) — The Jerusalem Post on Tuesday (May 31) refused to scrub an interview with Taiwan's Foreign Minister Joseph Wu (吳釗燮) after threats by a Chinese diplomat threatening to cut ties with the paper and downgrade China's relations with Israel.

On Monday (May 30), the newspaper posted an interview with Wu in which he pointed out that as an authoritarian country, China has a different approach to doing business than democratic countries. Wu warned that they sometimes "use trade as a weapon, and we have seen them practicing their weaponize trade relations with many other countries."

He emphasized that countries that do business with China need to ensure that these commercial ties do not jeopardize national security. The minister then observed that Israel "also places national security very high on the government agenda."

Wu pointed out that China launched 972 sorties in Taiwan's air defense identification zone last year and that his country is the primary target of Chinese disinformation efforts and cyberattacks. Wu described China's aggression as stemming from "rapidly expanding authoritarianism" and that Taiwan "happens to be on the front line."

He warned that rather than being deterred by the losses seen in the Russo-Ukraine war, China appears to be ramping up efforts to take military action against Taiwan. Wu asserted that China has been "drawing the wrong lesson" from the Russian invasion of Ukraine by assessing what mistakes the Russians had made to improve their strategy, "And if they do that, I think their determination to go after Taiwan is going to be stronger."

The minister said that Taiwan is seeking to counter China's invasion plans by strengthening itself both militarily and diplomatically. Wu said that in addition to forging friendships with Eastern European countries, Baltic States, Canada, Australia, and Japan, Taiwan is also seeking to improve its relations with Israel.

He emphasized that although there are limits on bi-lateral exchanges with Israel due to its ties with China, there is more room for growth in relations between Taipei and Jerusalem. Wu then cited an American diplomat as saying "don't worry about China getting upset at you. When they get upset at you, that means you're doing something right."

On Tuesday, The Jerusalem Post's Editor-in-Chief Yaakov Katz announced on Twitter that shortly after publishing the article, he had received a call from a top Chinese diplomat at the Chinese embassy telling him to take down the report or "they will sever ties" with the newspaper and "downgrade relations with the State of Israel." Katz then defiantly wrote: "Needless to say, (the) story ain’t going anywhere."

Didn’t take long. Got call from Chinese embassy. Apparently I’m supposed to take down the story or they will sever ties with the @Jerusalem_Post and downgrade relations with the State of Israel. Needless to say, story ain’t going anywhere. https://t.co/BypRMTbc6W