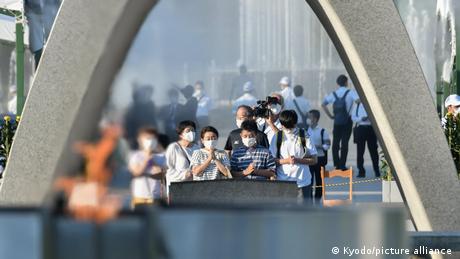 Moscow has responded angrily to the decision by the mayors of the Japanese cities of Hiroshima and Nagasaki not to invite representatives of the government of Russia to annual ceremonies to mark the anniversary of first atomic bombs used in a time of war.

City authorities say the decision not to invite Russian President Vladimir Putin, senior members of his cabinet, or even a member of the Russian embassy in Tokyo, was taken by the Japanese government.

Local authorities say they are disappointed by Tokyo's position and would have liked Russian officials to be present.

But many Japanese, who have been shocked by Moscow's war on Ukraine and threats to use nuclear weapons, oppose Russia's involvement in what is a somber day of remembrance. Among them is Shigeaki Mori, who as a boy of 8 survived the detonation of the "Little Boy" atomic bomb above his city on August 6, 1945.

Confirming the decision, Hiroshima Mayor Kazumi Matsui said at a press conference on May 26 that he feared other countries would boycott the event if Russian officials were scheduled to attend.

"I do not want the ceremony to be used as a political football," he said.

The same day, Nagasaki Mayor Tomihisa Taue stated, "We wanted to invite them, but the reality is difficult. We would like the ceremony to have a solemn tone."

As many as 226,000 people, mostly civilians, were killed when the bombs exploded above Hiroshima and, three days later, over Nagasaki. Countless more sustained serious injuries, while radiation from the blasts was linked to a variety of illnesses in people over the following decades.

Russia was quick to criticize Japan's decision, with Grigory Karasin, the chairman of the International Committee of the Russian Federation, stating on the Telegram social network site: "The Japanese government was politically rude not to invite Russian Ambassador Mikhail Galuzin to ceremonies commemorating the victims of the US nuclear bombings."

The Russian ambassador, meanwhile, slammed the decision as an "ignoble action."

"The organizers decided to ‘cancel' our country under the pretext of the special operation in Ukraine. The numerous bogus insinuations about the alleged possibility of Russia using nuclear weapons in Ukraine are being dishonestly spread," Galuzin posted on social media on May 25.

Mori, however, is unmoved. "I have been watching the news on television and it's terrible to see so many people being killed," he said. "There are Ukrainian people dying and there are Russians dying. And for what? All war is terrible and there is no need for this.

"I cannot do anything, but I feel that something has to be done," said Mori, who was standing on a low hill about 3 kilometers (1.86 miles) from ground zero of the atomic bomb when it exploded above Hiroshima in 1945.

Blown off his feet, he found himself in a stream within the mushroom cloud. It was so dark he could not see his hands in front of his face. Mori was fortunate to survive, he said, but images of the dead and the dying in the city over the following days are seared into his memory.

A spokeswoman for the city told DW that Hiroshima had hoped a representative of the Russian government would be able to attend the commemorative events. "We believe it is very important that everyone sees the consequences of the atomic bomb in person," she said.

"The Foreign Ministry in Tokyo was concerned that if a Russian delegation was present then other countries might decide not to come, so we reluctantly decided not to invite Russia. But when the situation changes, then we will again invite Russia to attend the ceremony in the future," she added.

Others share that opinion, with Ken Kato, a Tokyo-based businessman and activist for conservative causes, saying Japan has been "truly shocked" at Putin's threats to use nuclear weapons in Ukraine.

"It is intolerable that anyone uses the threat of atomic weapons to bully the rest of the world," he said.

"We, as Japanese, know the horror of nuclear war and everyone here was truly shocked when Putin warned that he would use one of his bombs.

"Personally, I do not believe Putin or any of his ministers would have come because it would have been embarrassing," he added.

"And if the ambassador had attended, the protests would have been huge. I think that secretly they are happy not to come but they still think they have to protest."

Hiromi Murakami, a professor of political science at the Tokyo campus of Temple University, said that the issue is "delicate."

"I can certainly see why the Japanese government has taken this position; they want to avoid any sort of protests or disturbances at the commemorative events, but the anniversary also serves as an important educational tool.

"More people need to know what happened in Hiroshima and Nagasaki to make sure the same thing does not happen again," she said. "With what is happening in Ukraine right now, perhaps this is a missed opportunity."