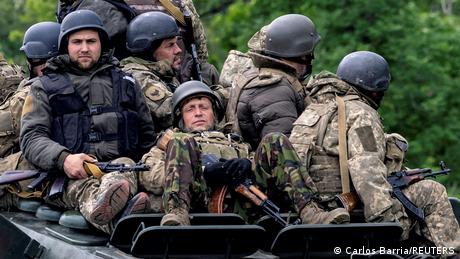 This article was last updated at 02:25 UTC/GMT

A Lithuanian crowdfunding campaign has raised more than €5 million ($4.7 million) to buy a Turkish Bayraktar TB2 drone for Ukrainian forces.

"Lithuanians just did it! Thank you all who helped us," the country's Defense Minister Arvydas Anusauskas posted on Twitter.

"This is the first case in history when ordinary people raise money to buy something like a Bayraktar. It is unprecedented, it is unbelievable," Ukrainian Ambassador to Lithuania Beshta Petro told Laisves TV, the news outlet which helped launched the campaign.

Lithuania's Ministry of Defense told Reuters it planned to sign a letter of intent to buy the Bayraktar TB2 armed drone from Turkey next week.

Ukraine already owns Bayraktar TB2 drones and has used them successfully in its campaign against Russia.

Not all lost territory will be retaken by military means, Zelenskyy says

Ukrainian President Volodymyr Zelenskyy said the situation was "indescribably difficult" in the country's east, where Russian forces are making gains.

"The situation is very complicated, especially in those areas in the Donbas and Kharkiv region, where the Russian army is trying to squeeze at least some result for themselves," Zelenskyy said in his Saturday video address.

Russian forces stepped up their assault on Sievierodonetsk on Saturday after claiming to have captured the nearby rail hub of Lyman.

"But our defenses are holding up. It's indescribably difficult there," Zelenskyy said

The Ukrainian leader also said he didn't believe all the land seized by Russia since 2014, which includes Crimea, could be recaptured by force.

"I do not believe that we can restore all of our territory by military means. If we decide to go that way, we will lose hundreds of thousands of people," he said.

He was, however, adamant that "Ukraine will get everything back. Everything."

Ordinary members of Ukraine's Orthodox church branch, until now loyal to Moscow, drove the decision to break ranks with the Russian leadership, its spokesman told the French news agency AFP.

"There was a need for this, a demand in church society," Archbishop Kliment said.

Kirill is a staunch supporter of Russian President Vladimir Putin and has spoken out in support of Russia's invasion of Ukraine several times.

Kliment said the situation was clear: "The commandment 'thou shall not kill' has no other interpretations."

"It is difficult for me to (understand) the explanation or silence of the representatives of the Moscow patriarchate on the tragedy that is happening today," he added.

Summary of Saturday's events in the war in Ukraine

The Russian military confirmed on Saturday the capture of the town of Lyman in the eastern Donbas region. The confirmation comes a day after pro-Russian separatists had on Friday claimed full control of the strategically important town.

Petro Poroshenko, the former president of Ukraine and the leader of the country's second-biggest party, said on Saturday that he had been blocked from leaving the country while on his way to take part in a NATO parliamentary assembly meeting. He was en route to Lithuania to meet President Gitanas Nauseda ahead of the NATO meeting, for which he had been given official permission to travel.

Officials controlling the Russian-occupied city of Kherson and the surrounding area closed off access to Ukrainian-controlled territory for refugees.

"The border crossing in the direction of the Mykolaiv and Dnipropetrovsk regions is extremely dangerous on account of systematic bombardment by Ukrainian fighters," the deputy head of the pro-Russian military administration, Kirill Stremoussov, said.

You can revisit our live updates from May 28 here.