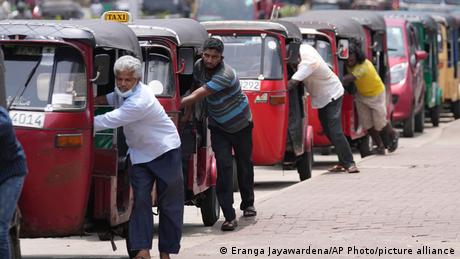 Thousands of Sri Lankans took to the streets of the capital on Saturday, on their 50th day of demonstrations demanding that President Gotabaya Rajapaksa step down.

Police used tear gas and water cannon as the protesters tried to approach the president's office. They broke up the rally and briefly detained three people before releasing them.

Sri Lanka is nearly bankrupt, has defaulted on its foreign loans, and is battling acute shortages of goods like cooking gas, fuel and medicines.

People have been waiting for hours in line for gasoline, kerosene and other core products. Lengthy daily power blackouts have also become commonplace.

President Rajapaksa has tried on several occasions to quell more than a month of protests accompanying the economic turmoil.

He has even dismissed a series of his close relatives from core political positions, including but not limited to his brothers who until recently were his prime minister and finance minister. However, he has so far sought to stop short of stepping down himself.

The country's foreign currency reserves have also dwindled to such low levels that it can only import materials for a short period, roughly two weeks.

A Russian shipment of oil, ordered via a consortium, had been waiting offshore off the capital Colombo's port for over a month because the country was unable to raise the $75 million (roughly €70 million) to pay for it, Energy Minister Kanchana Wijesekerra said. The oil finally docked on Saturday, according to Wijesekerra.

Despite US and Western sanctions, Sri Lanka is also trying to arrange crude, coal, diesel and gasoline/petroleum deliveries directly from Russia.

"I have made an official request to the Russian ambassador for direct supplies of Russian oil," Wijesekerra said. "Crude alone will not fulfill our requirement, we need other refined [petroleum] products as well."

The country's only oil refinery stopped operating in late March, with Sri Lanka no longer able to import crude oil. Fuel prices were raised drastically earlier this week, and rationing is still in effect for purchasers.

Sri Lanka's Ceylon Petroleum Company is in arrears of more than $735 million to suppliers, and Wijesekerra said that no one came forward to even bid for the country's oil tenders.

While the Siberian grade crude was not an ideal match for the country's refinery, which is optimized for Iranian light crude, Wijesekerra said no other supplier was willing to extend credit. Colombo would nevertheless call for fresh supply tenders in two weeks, he said.