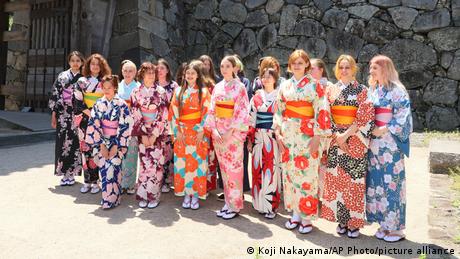 The Japanese government has been quick to publicize its acceptance of more than 1,000 refugees from war-torn Ukraine.

But critics point out that Japanese immigration authorities have been far less willing to open the nation's doors to people fleeing violence and persecution in developing states much closer to Japan.

Those double-standards need to end, human rights groups say, and Japan needs to live up to its international obligations on extending assistance to refugees from other war zones.

According to the United Nations High Commission for Refugees, nearly 6.6 million Ukrainians have fled their homeland since the Russian invasion on February 24.

More than 3.5 million have crossed the border into Poland, while others have found sanctuary in other neighboring countries, including Romania, Hungary and Slovakia.

Six days after the invasion, Japanese Prime Minister Fumio Kishida announced that Japan would take in evacuees from Poland, in an effort to ease the pressures on Warsaw. Flights carrying refugees — mostly women with children — have been arriving in Japan since late March.

Japan is granting new arrivals from Ukraine 90-day visas and the opportunity to switch to a visa for a year once they find employment.

Support services are also being provided, including information on jobs, accommodation, language classes, schools for children and websites where they are able to obtain clothing, furniture and home appliances.

"We believe this is a good approach and we support the government's actions," said Daisuke Sugimoto, secretary general of the Tokyo-based Japan Lawyers Network for Refugees.

"We are seeing that Ukrainians are being welcomed into communities across Japan and people here are doing everything they can to help them," he told DW.

"It is just unfortunate that the Japanese government has not done the same for asylum-seekers and refugees from other countries, people who are trying to get away from civil war or conflict in Afghanistan, Myanmar, Syria and other places."

Sugimoto said granting access to Ukrainians is a "political decision linked to Japan's foreign policy on Ukraine, rather than a decision based on humanitarian considerations and needs."

In 2021, Japan recognized 74 displaced persons from around the world as refugees, Sugimoto said.

Refugee support groups in Japan say the requirements for a person to be granted refugee status are difficult to meet, particularly documents proving persecution in their homeland as well as a written testimony from witnesses.

As a result, most are treated as economic migrants and held in detention centers until they can be deported, a process that can take several years as applicants file appeals against the government's decision.

Sugimoto said life can be "very difficult" for refugees in Japan, even those who are permitted to leave detention centers — pending a ruling in their case — as they are not permitted to work.

The Ministry of Justice, which oversees Japan's immigration policy, declined to comment on the regulations surrounding refugees.

Eri Ishikawa, chair of the Japan Association for Refugees, said the Japanese government too often fails to see refugees and asylum-seekers as people who have been the target of torture or abuse or as individuals whose lives are in danger, preferring instead to see them as a group "that needs to be controlled."

"It is a policy of immigration control rather than finding ways to help these people, and that is very different to other countries," she said, adding that Japan does not have legal provisions that expressly outlaw xenophobia or racial discrimination, which makes it difficult for human rights groups to push for better treatment of foreign refugees.

Ishikawa said she feels encouraged, however, by the way in which ordinary Japanese people have gone out of their way to help Ukrainians settle into their new lives.

She hopes that now Japanese civil society has witnessed, through extensive media coverage, what the refugees have endured, that they might be more open to the survivors of other conflicts coming to Japan.

"A lot of Japanese have now seen what has happened in Ukraine…so they really understand the plight of these people," she said.

She added that research has indicated that a majority of people in Japan are now in favor of more Ukrainians being permitted to enter the country.

"It is up to organizations such as ours to explain to Japanese people that many more people are living in situations that are just as dangerous in other parts of the world and that more must be done to help them," she said.

"What is happening in many places is heartbreaking, but I’m hopeful that what has happened in Ukraine can help to change attitudes among ordinary Japanese towards refugees," she added.