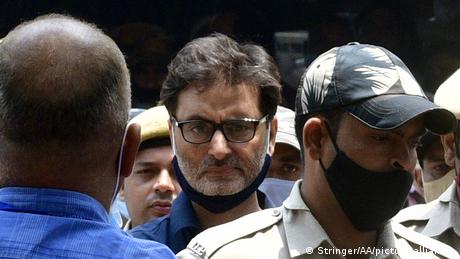 During the sentencing of Kashmiri pro-independence leader Yasin Malik on Wednesday, authorities in India-administered Kashmir blocked mobile internet services and cracked down on Malik's supporters who protested in Srinagar.

Some marched through the streets of Kashmir's largest city, chanting "We want freedom" and "Go back India." Government forces fired tear gas in their direction, while the marchers threw stones.

The 56-year-old Malik was convicted last week by a National Investigation Agency (NIA) court in New Delhi of funding anti-India militancy in Kashmir. He was sentenced to life in prison.

Malik leads the Jammu and Kashmir Liberation Front (JKLF), a separatist organization that renounced acts of violence in 1994 but continues to demand the Kashmir's independence from both India and Pakistan. Kashmir is claimed in full, but ruled in part, by the South Asian arch-rivals.

Malik was arrested and the JKLF was banned under a new anti-terror law in 2019, the same year New Delhi abrogated Article 370 of the Indian constitution that guaranteed Kashmir's semi-independent status.

The move sparked ongoing unrest, as many Kashmiris fear a demographic shift engineered by India moving in more ethnic Hindus into the Muslim-majority region.

More than 100 people, including militants, Indian soldiers, and civilians, have died this year in sporadic violent incidents in Kashmir.

Malik is regarded as one of the chief architects and central figure of a militant independence movement that started in 1989. However, he has also been considered by some a more secular and moderate voice among Kashmiri separatists.

In 1994, Malik as chief commander of the JKLF said the group would denounce violence and enter into talks with New Delhi on the Kashmir dispute.

He met with top diplomats from Europe, the US, and India to explicitly express his commitment to what he called a "Gandhian" approach of non-violence to achieve his political goals.

Malik endured criticism after his unilateral ceasefire led to the killings of dozens of his cadres at the hands of India's army.

Although the JKLF laying down arms temporarily quelled conflict in the region, New Delhi and Islamabad both continue to dismiss Kashmiri independence. The abrogation of Kashmir's special status in 2019, and India's ensuring security crackdown further increased tensions.

"Malik laid down arms to embrace the path of non-violence and finally landed in jail for life. It leaves little hope for experimenting with dialogue in resolving disputed issues," said Wani.

"He will always be relevant to the political scene in Kashmir with his life imprisonment only enhancing his stature as a symbol of Kashmiris' desire for freedom," Kashmiri political analyst Reyaz Ahmad told DW.

"His incarceration will be a perpetual source of grievance for Kashmiris and a fuel to the sentiment for freedom," he added.

Malik is among thousands of Kashmiris who have been jailed for their links with militant separatist movements as India tightens its security strategy in the restive region.

Indian authorities are also shifting Kashmiri political detainees to prisons far away from the region to break their contact with locals.

The former head of Amnesty International in India, Aakar Patel, told DW that Malik's decision to not contest the charges against him suggests he has no faith in the impartiality of India's judiciary.

"Unfortunately, he has good reason to be skeptical. The habeas corpus pleas of Kashmiri leaders locked up after the gutting of Article 370 went undecided in the Supreme Court," Patel said.

"This is a very distressing period and Malik's decision to martyr himself should alert us to the helplessness felt by Kashmiris," he added.

A 'strong message to militants'

However, Indian BJP party politician and former deputy chief minister of Jammu and Kashmir Nirmal Singh said the verdict "will send a strong message to separatists that they can't escape from the crimes they have committed."

"The separatist ideology is being dealt with iron hands and rule of law is being implemented," Singh said.

The People's Alliance for Gupkar Declaration (PAGD), a political alliance campaigning for Kashmiri autonomy, said in a statement the verdict will further alienate the people of Kashmir.

"Life imprisonment given to Malik is a setback to the efforts for peace. We are afraid that this will further compound the uncertainties in the region and will only fuel more alienation and separatist feelings," the PAGD statement said.

However, Kashmir Pandits, an ethnic Hindu minority in Kashmir, have hailed the court decision, and added they want Malik to be tried for killing Pandits in the 1990s.

"We respect the judiciary, but we expect Yasin Malik to be tried for the actual crimes committed by him. Today's punishment is a joke about what he has done to Kashmiri Hindus. You have just punished him for terror funding," said Kashmiri Pandit leader Lalit Ambardar.