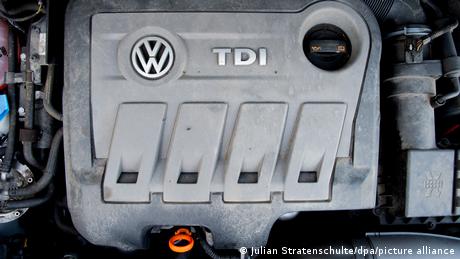 Volkswagen on Wednesday said that it would pay 193 million British pounds (roughly €227 million, or $243 million) as part of an out-of-court settlement over the diesel emissions scandal that engulfed the VW Group — and later much of the automotive industry — in 2015.

"The settlement is another important milestone as the Volkswagen Group continues to move beyond the deeply regrettable events leading up to September 2015," Philip Haarmann, chief legal officer at VW, said in a statement.

The settlement is the response to a class action lawsuit brought on behalf of some 91,000 claimants in England and Wales.

VW said the precise terms and conditions of the settlement were confidential. However, it did say that in addition to the larger compensation fund, "a separate contribution is being made by the Volkswagen Group toward the claimants' legal costs and other fees."

The settlement spares VW a potentially lengthy and expensive legal procedure that might also damage its image. It also meant the company could avoid any formal admission of wrongdoing.

"No admissions in respect of liability, causation or loss have been made by any of the defendants in the group as part of the settlement," VW said.

Many of VW's subsidiaries, such as Audi, Porsche and Seat, were also involved in the case, often because they use the exact same engines with a different badge in certain models.

The law firms representing the plaintiffs also welcomed the settlement, saying it "avoids the need for a lengthy, complex and expensive trial process."

Similar payments in US, Germany, elsewhere

The scandal that became known as "Dieselgate" involved VW using special software to dupe official emissions tests. Its so-called "defeat devices" recognized the unique running patterns of formal emissions testing — which is unlike ordinary driving — and were able to ensure the vehicle emitted fewer nitrogen oxides than it would in normal circumstances.

Nitrogen oxides are part of the trade-off of diesel cars, which tend to emit less carbon dioxide (CO2) than cars running on gasoline/petrol. Although not particularly damaging in terms of climate change, certainly when compared to CO2, they have more severe impacts on air quality.

VW's test deception was first uncovered in the US, whose recent history of battling smog in major cities means it has more prohibitive nitrogen oxide regulations than the EU, which focuses more on fuel efficiency and CO2 in its standards.

The scandal sparked the biggest business crisis in VW's modern history, costing the company more than €32 billion in vehicle refits, fines and legal costs to date, perhaps most notably in the US and Germany.

VW believes that about 11 million vehicles worldwide were affected, 1.2 million of them in the UK.

A series of other major car manufacturers ultimately faced similar allegations for their diesel vehicles, including Fiat, Opel, Mercedes-Benz, Renault and Nissan, albeit on a smaller scale. Past cases of programming cars to deliver misleading test results also existed.

Some activists urged the industry to adopt "real-world" testing regimes in the future so it would no longer be possible to deceive regulators. However, this would have the downside of drastically reducing the nominal fuel efficiency of cars, which is as unpalatable for manufacturers as it is for regulators and politicians trying to tout fuel efficiency gains. It would likely require adjusting emissions regulations to make them more forgiving.