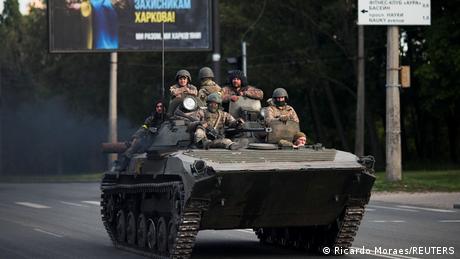 This article was last updated at 07:33 UTC/GMT

Ukrainian President Volodymyr Zelenskyy on Wednesday said that he would be willing to negotiate only with Russian President Vladimir Putin.

"I can only talk to the president directly, no intermediaries, no mediators," Zelenskyy told the World Economic Forum via videolink in Davos.

Zelenskyy also said that Moscow needed to pull back troops to where they stood before the invasion of February 24.

"That might be a first step towards talks," Zelenskyy said.

According to the latest intelligence report from the United Kingdom's Ministry of Defence (MOD), Russia's blockade of key ports has resulted in "no significant merchant shipping activity in or out of Odessa since the start of the war."

The MOD briefing stated that "significant supplies of Ukrainian grain remain in storage unable to be exported," because overland options were unlikely to be an effective substitute, considering the Russian naval blockade.

The MOD said that the war had already placed pressure on global grain prices which could increase further due to supply shortfalls.

Russia to open humanitarian corridor for foreign ships from Mariupol

The Russian Defense Ministry said it would set up a naval corridor to facilitate the safe exit of foreign vessels from the port of Mariupol on Wednesday. The safe passage – 115 miles long and 2 miles wide – will lead the vessels toward the Black Sea.

A Russian official said the country’s naval forces had eliminated the danger posed by mines along the designated path.

Ukrainian President Volodymyr Zelenskyy said Russian troops were targeting key cities in eastern Ukraine with an aim "to destroy everything there."

In his nightly address, Zelenskyy said: "In fact, all the strength the Russian army still has was thrown there to attack. Lyman, Popasna, Severodonetsk, Slovyansk — the occupiers want to destroy everything there."

Mourning the loss of thousands of Ukrainian men and women, he renewed calls for heavy weapons from foreign partners to help end the conflict.

Zelenskyy said that the longer the war lasted, the higher the costs would be not only for Ukraine but also for the whole free world.

"Therefore, the supply of heavy weapons to Ukraine — MLRS [multiple launch rocket system], tanks, anti-ship and other weapons — is the best investment in maintaining stability in the world and preventing many severe crises that Russia is still planning or has already provoked," he said.

Summary of events in Ukraine-Russia conflict on Tuesday

Workers found 200 bodies in a decomposed state in the basement of an apartment building that collapsed in Mariupol, according to a Ukrainian official. Petro Andryushchenko, an advisor to the Mariupol mayor, said the decomposing bodies had left a stench in the neighborhood.

German Economy Minister Robert Habeck said the European Union will likely "reach a breakthrough" on a ban on Russian oil imports "within days." With many member states heavily reliant on Russian energy, the 27-member bloc had failed to reach a consensus on the embargo, mainly because of objections from Hungary.

Chancellor Olaf Scholz slammed Russian President Vladimir Putin's decision to pursue "a very brutal war" in Ukraine, calling it an "imperialistic approach." Speaking to DW, Scholz said he had told Putin directly that the war "will never have a good outcome" for Russia.

The United States will not extend a key waiver set to expire on Wednesday that allows Russia to pay US bondholders. The waiver had allowed Moscow to keep paying interest and avert a default on its government debt. Russia has almost $2 billion (€1.86 billion) worth of payments due up to the year-end on its international bonds.

During a summit with "Quad" leaders from Japan, Australia and India, US President Joe Biden said they were navigating "a dark hour in our shared history" as Russia wages war on Ukraine. He urged Quad leaders to work to halt the conflict.

The secretary of the Russian Security Council, Nikolai Patrushev, told the Russian publication Argumenty i Fakty that Russia will meet the objectives of its "special military operation" in Ukraine.