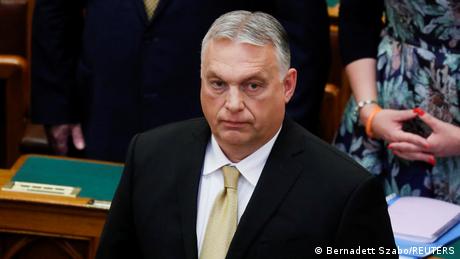 The Hungarian government on Tuesday passed a constitutional amendment giving Prime Minister Viktor Orban emergency powers, with the first measures to be announced on Wednesday.

Hungarian officials cited the Russian attack on Ukraine as the reason for the move, which effectively prolongs the pandemic state of emergency due to expire at the end of May.

In a video posted to social media Orban said that the war in Ukraine posed "a constant threat to Hungary" and that it was "putting our physical security at risk and threatening the energy and financial security of our economy and families.''

As a result of that Orban said a "state of danger" would come into effect, which would allow the government to "protect Hungary and Hungarian families by any means possible."

The amendment will allow Orban to continue ruling by decree and allows laws to be suspended without parliamentary oversight.

A similar measure granting Orban emergency powers due to the COVID-19 pandemic was first imposed in March 2020, then lifted in June of the same year before coming back in November 2020.

Balancing act between Brussels and Moscow

"It will become the new normal, which will threaten the fundamental rights of all of us, and rule by decree will further diminish the importance of Parliament," activist Emese Pasztor said in a statement.

Orban, a longtime ally of Russian President Vladimir Putin, has stated that Hungary must remain neutral and maintain its close economic ties with Moscow, including continuing to import Russian gas and oil.

Although he has supported an EU decision to send arms to Ukraine, he has rejected allowing weapons to be shipped from Hungarian territory, saying such a move could pose a security risk.

Putin was also among the first to congratulate the Hungarian leader when he was reelected for a fourth consecutive term in office in April.