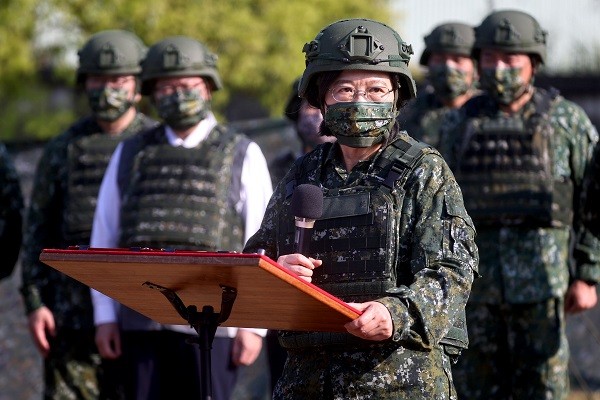 TAIPEI (Taiwan News) — In a new poll released on Tuesday (May 25), nearly half of respondents said that President Tsai Ing-wen (蔡英文) has not done enough to prepare Taiwan for an invasion by China, and the proportion expressing confidence in her preparations has dropped by 11% since the Russian invasion of Ukraine.

In the latest survey by the Taiwan Public Opinion Foundation (TPOF, 台灣民意基金會), participants were asked "In the face of the Chinese Communist Party's possible military invasion of Taiwan, generally speaking, do you think the Tsai government is fully prepared? In response, 49.5% deemed Tsai's preparations to be inadequate, a slight increase from 47.6% in October, while 32.8% judged them to be adequate, a drop of 11 percentage points since October, before Russia invaded Ukraine.

When it comes to Tsai's handling of cross-strait relations with China, 49.5% are satisfied and 39.2% dissatisfied. Regarding Tsai's foreign policy, 56.7% expressed satisfaction and 33.9% dissatisfaction.

Tsai received lower marks on judicial reform, with 37.4% of respondents satisfied and 43.9% dissatisfied. As for Tsai's policies in general, 46.2% approve and 39.5% disapprove.

The TPOF asserted the results of the survey indicate that since the outbreak of the Russo-Ukrainian war, Taiwanese have become increasingly concerned about their nation's defense preparedness in the event that China invades. The organization stated that the results also show Taiwanese feel Tsai's progress on judicial reforms is inadequate.

The survey was conducted for the TPOF by Focus Survey Research (山水民意研究公司) from May 16-17. The poll gathered valid responses via telephone from 1,077 adults 20 and over and had a sampling error of plus or minus 2.99% with a confidence level of 95%.