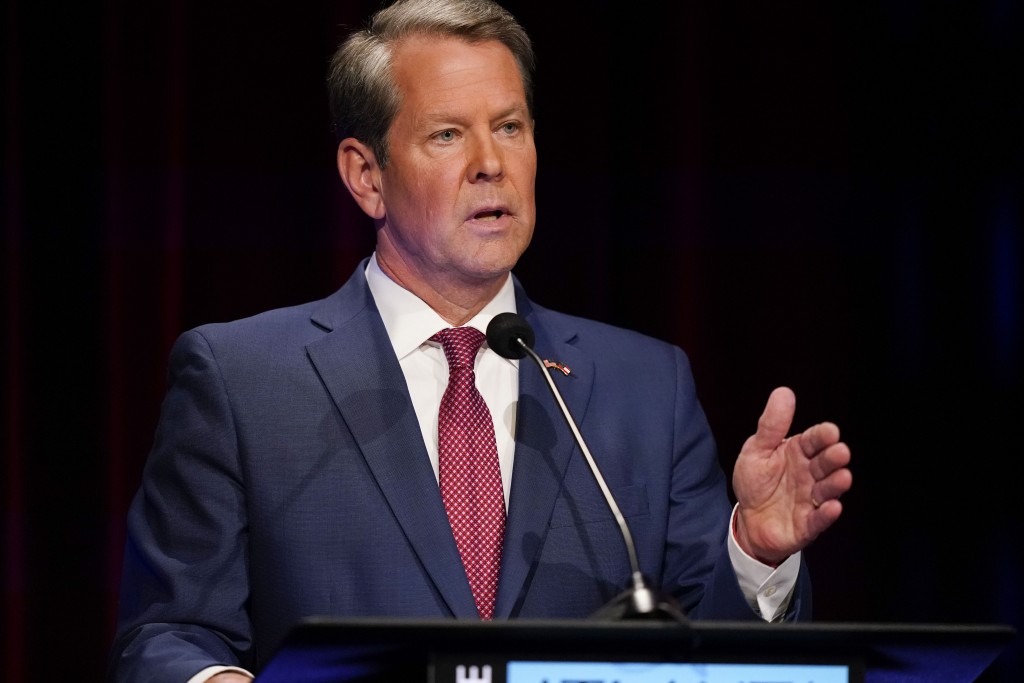 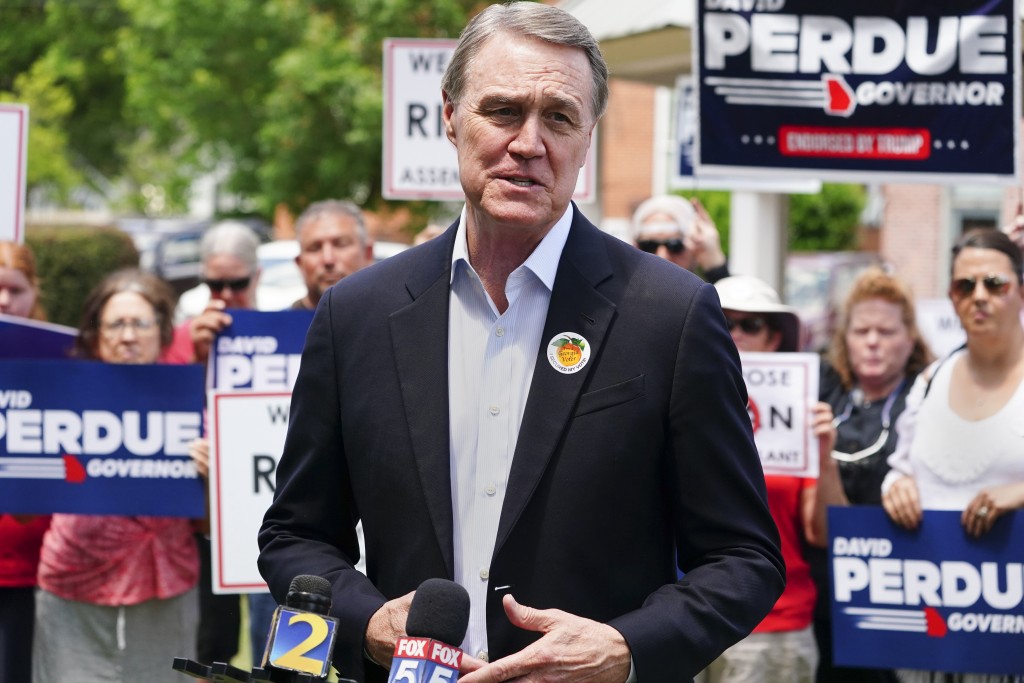 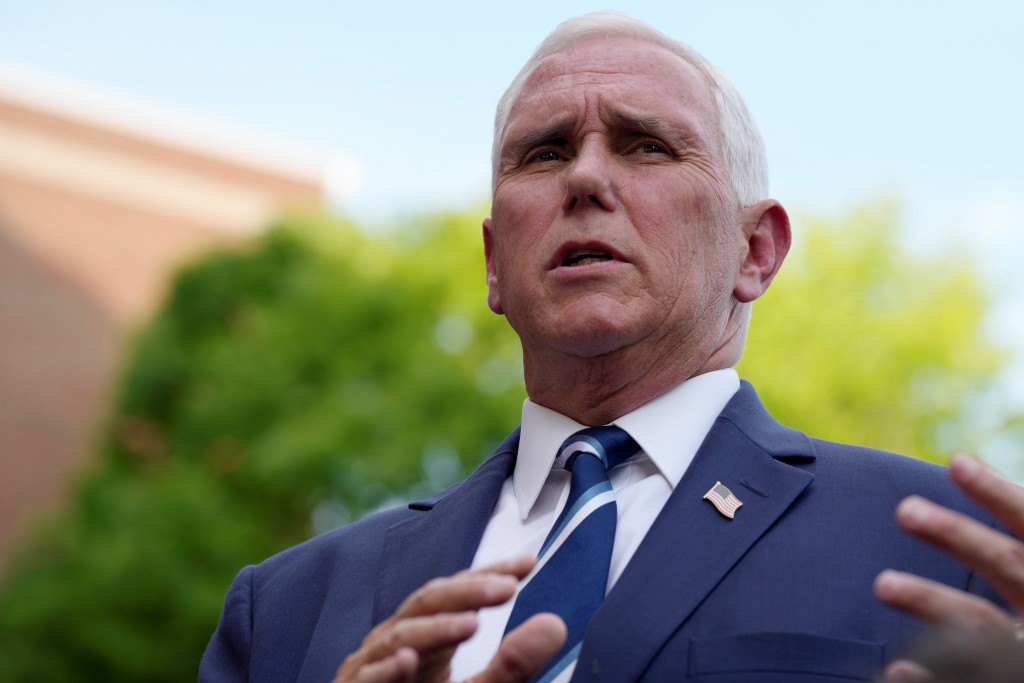 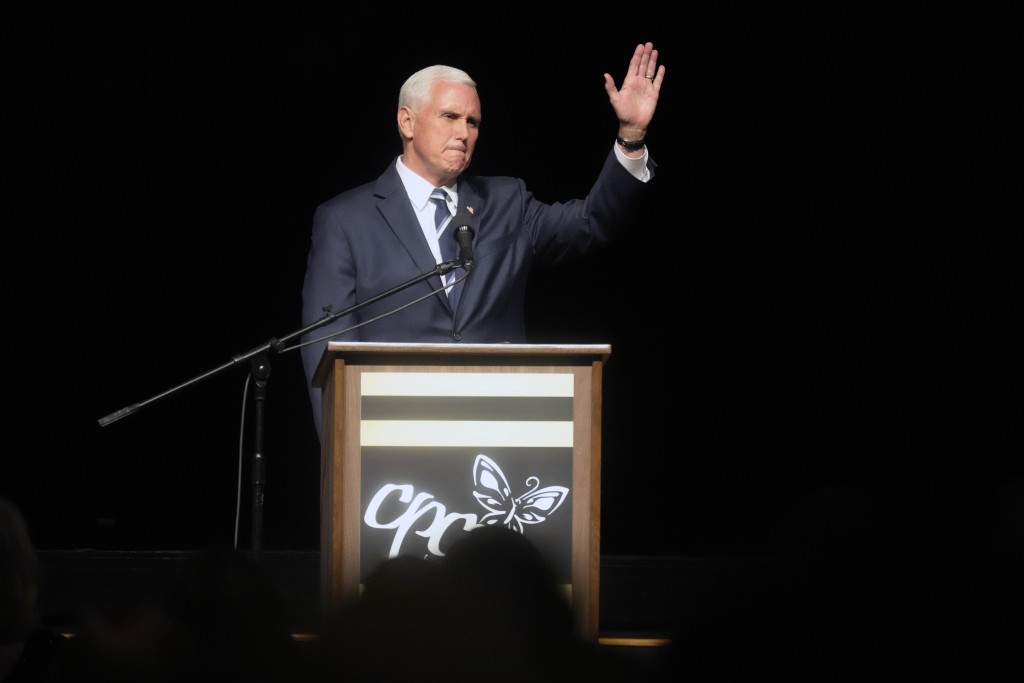 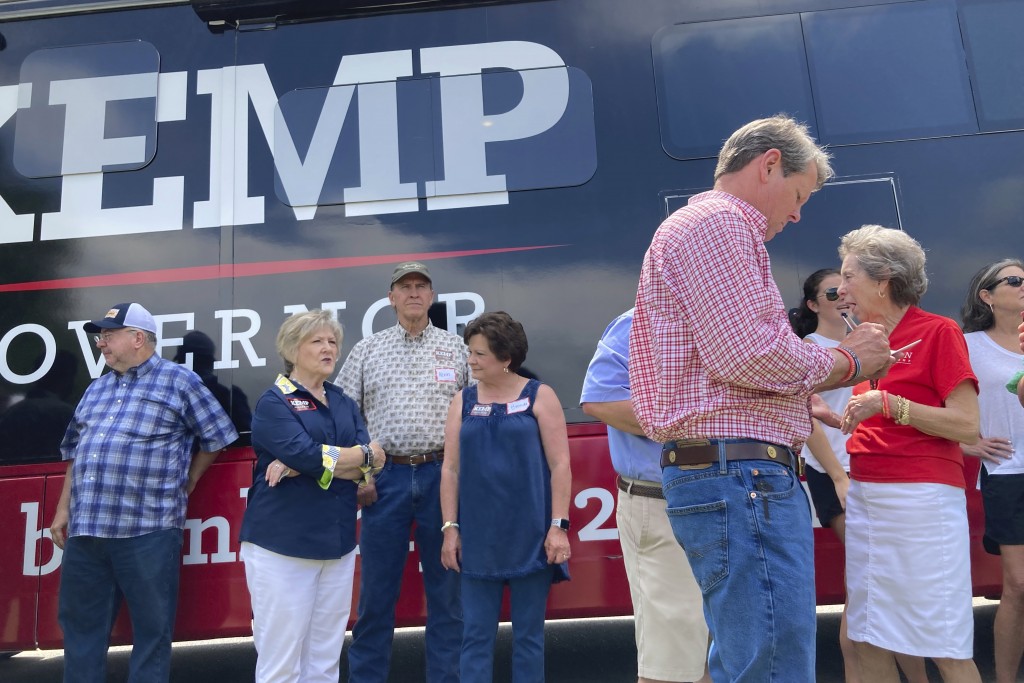 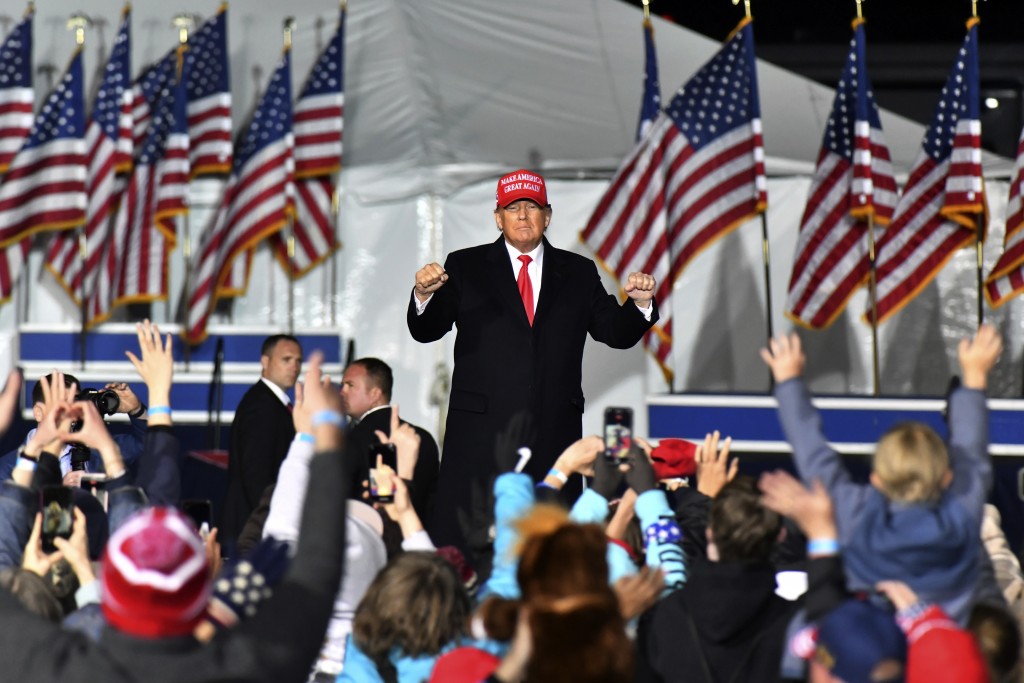 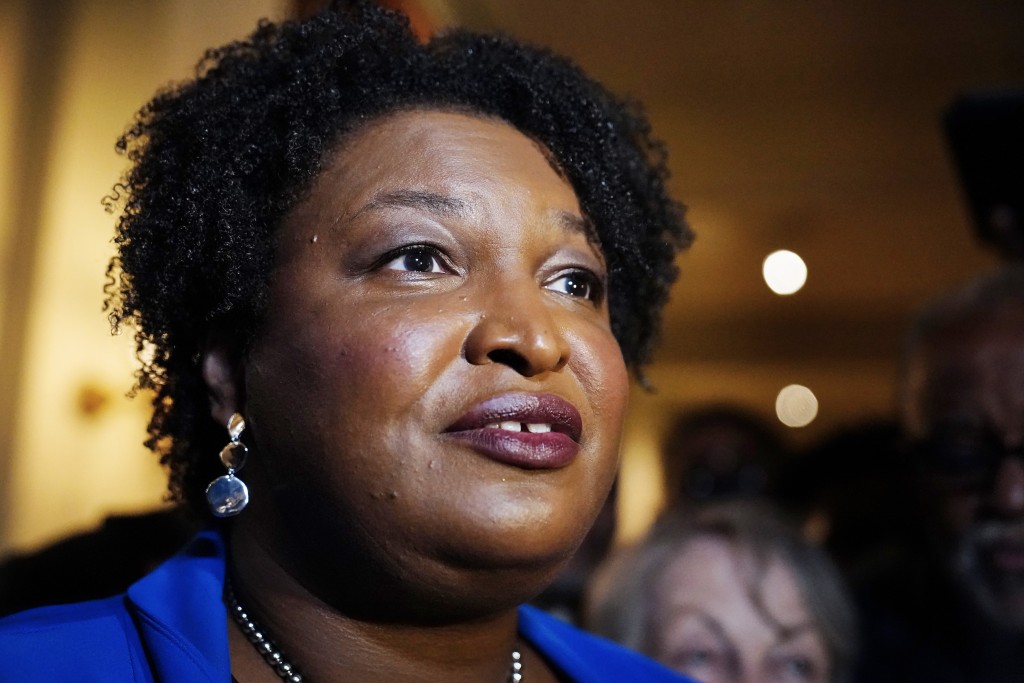 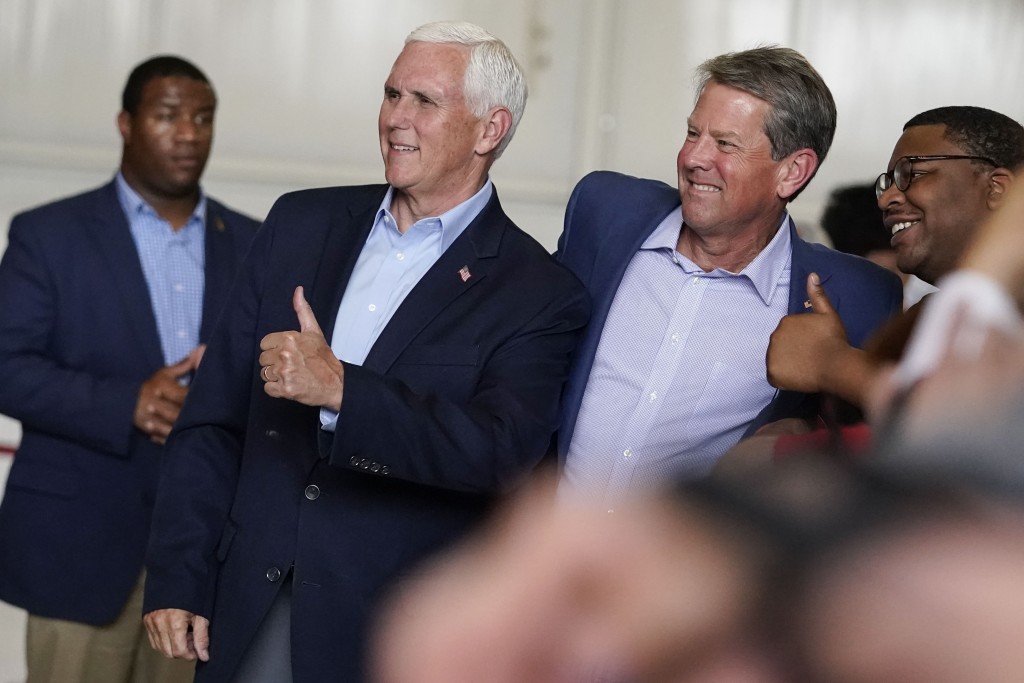 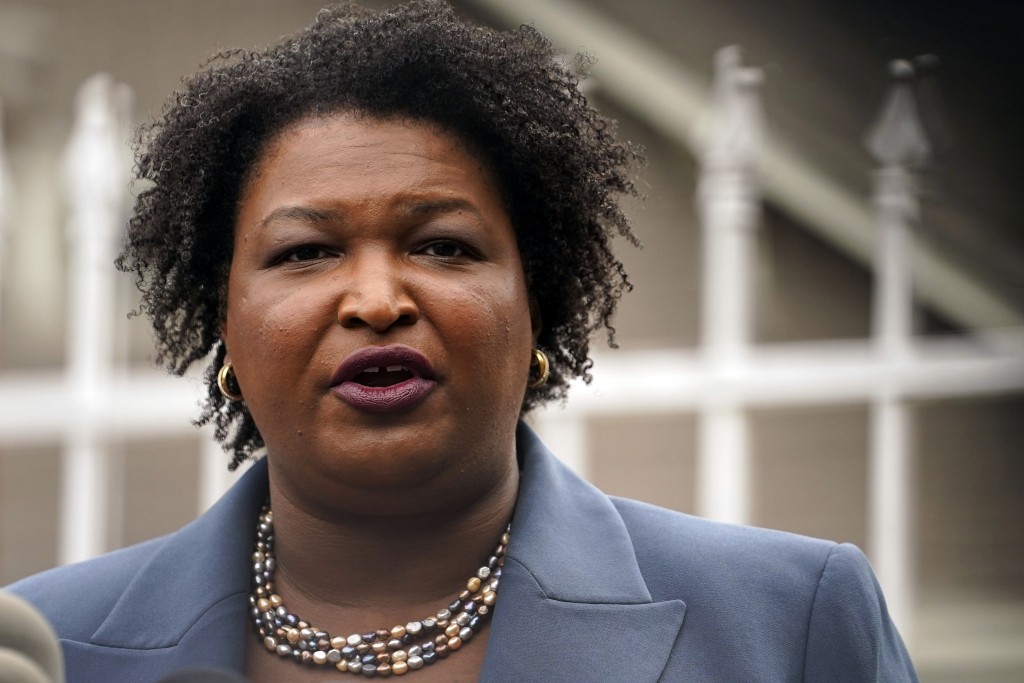 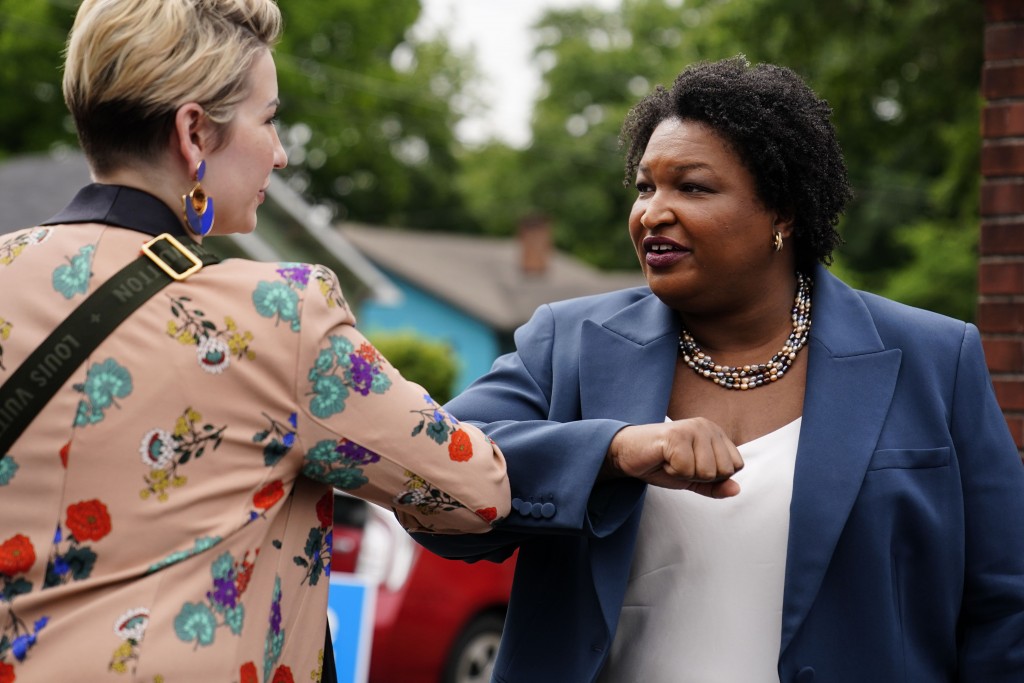 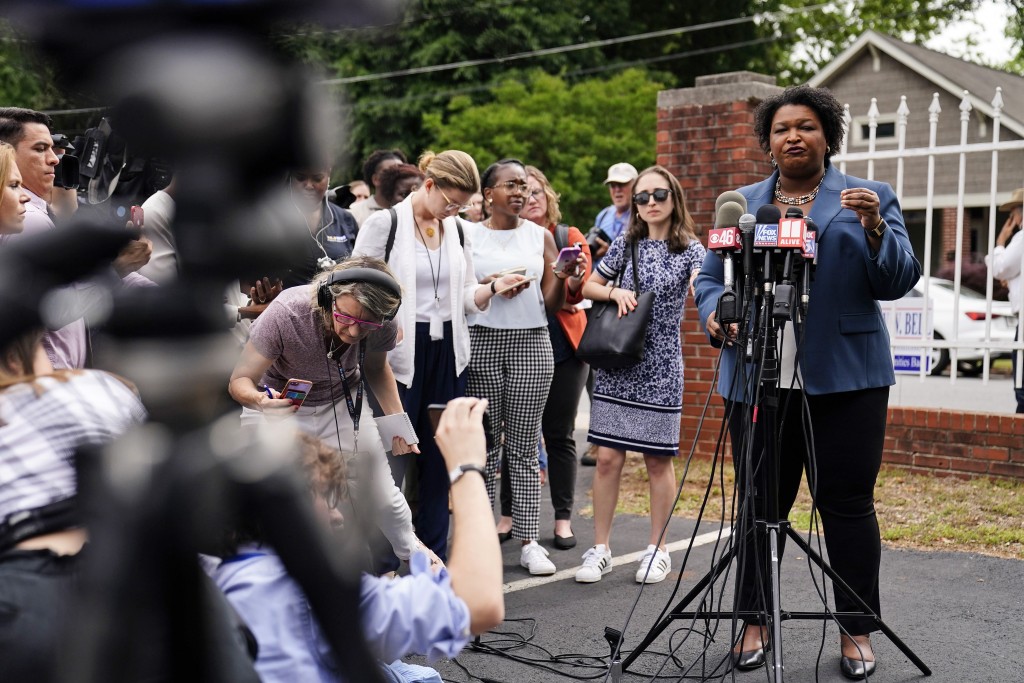 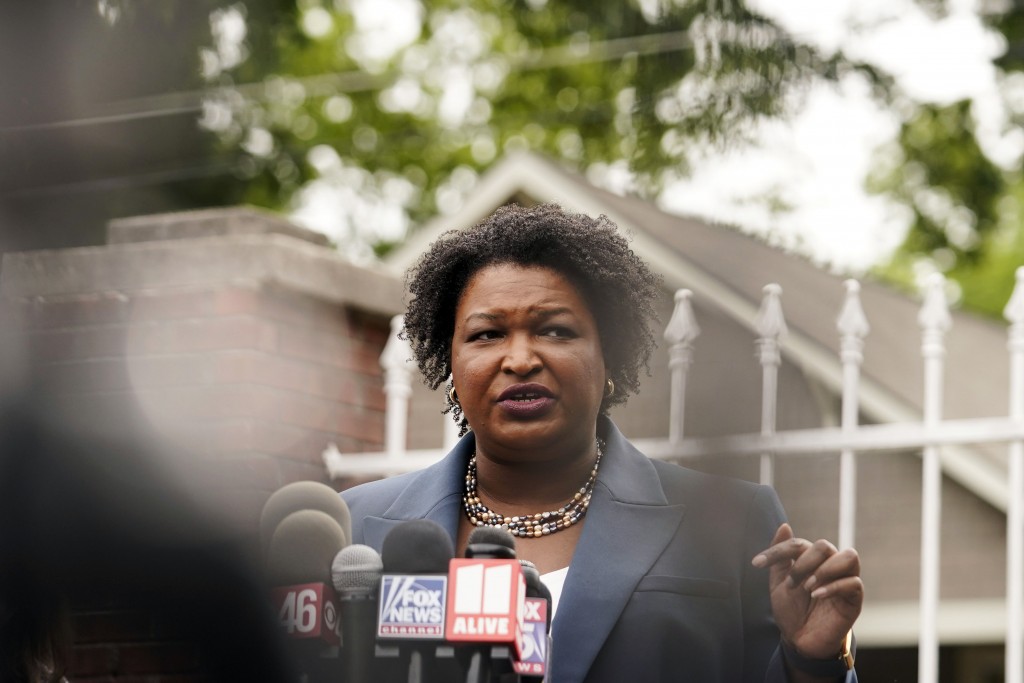 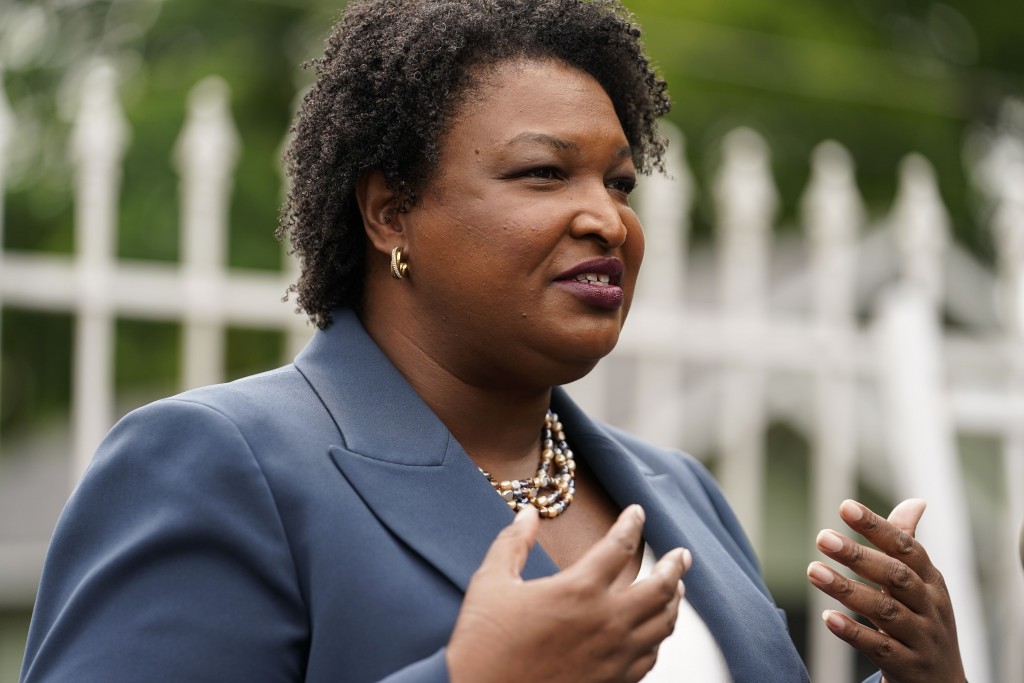 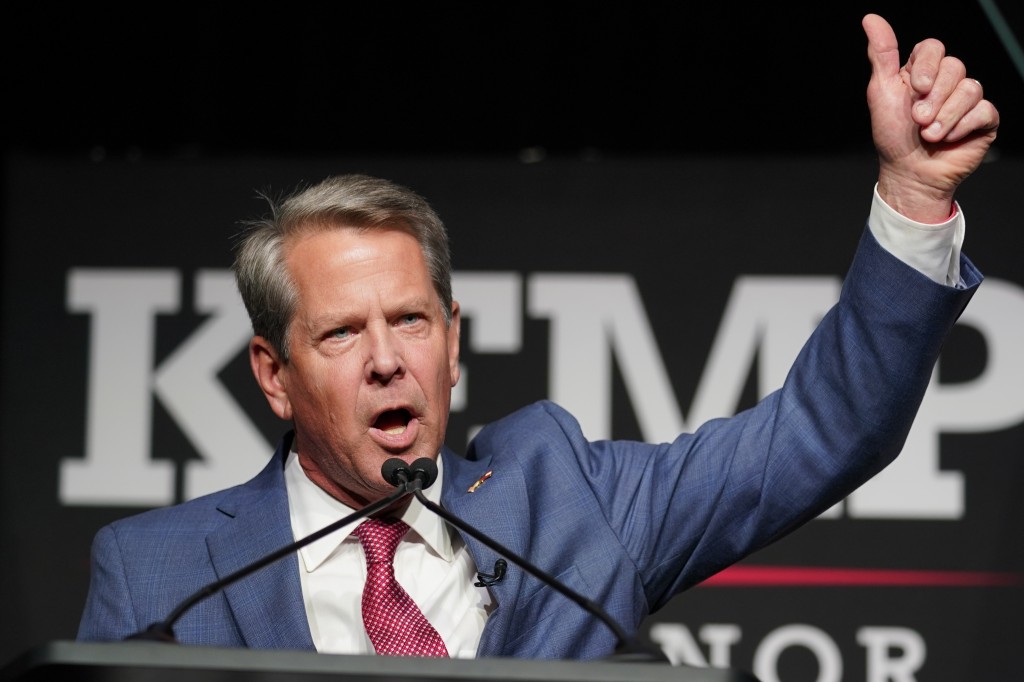 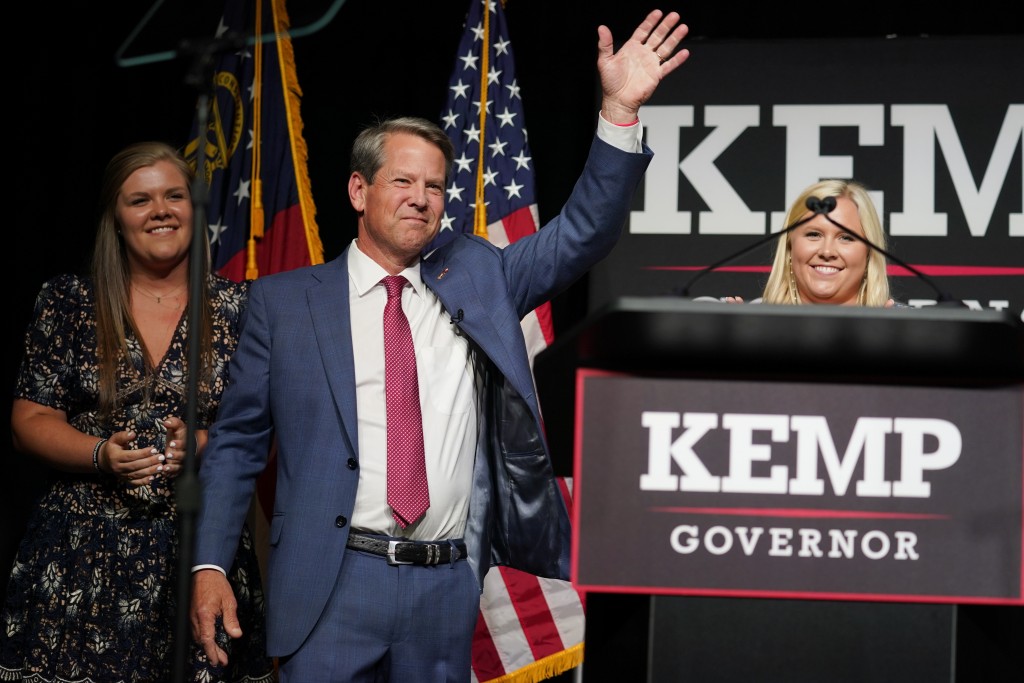 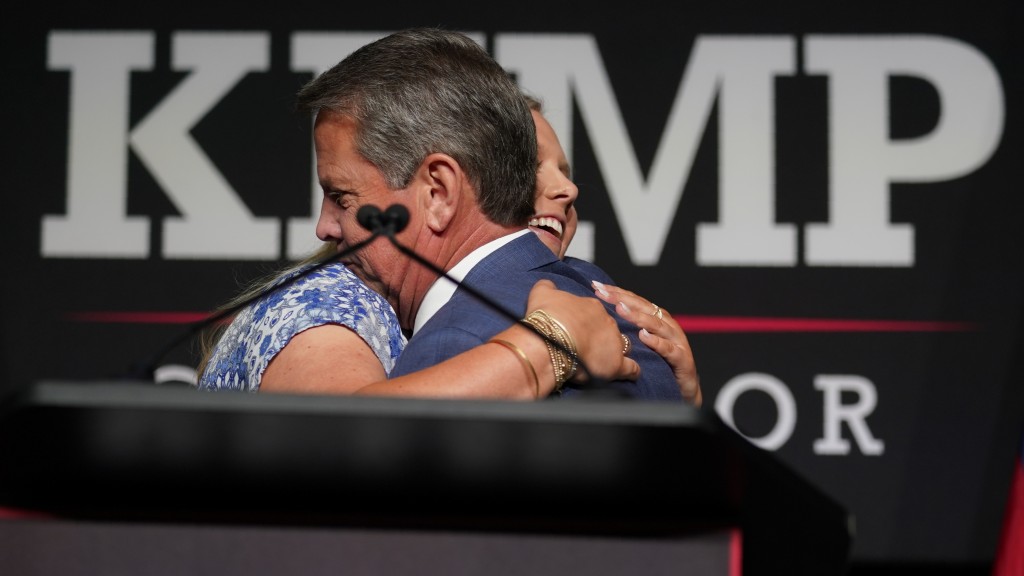 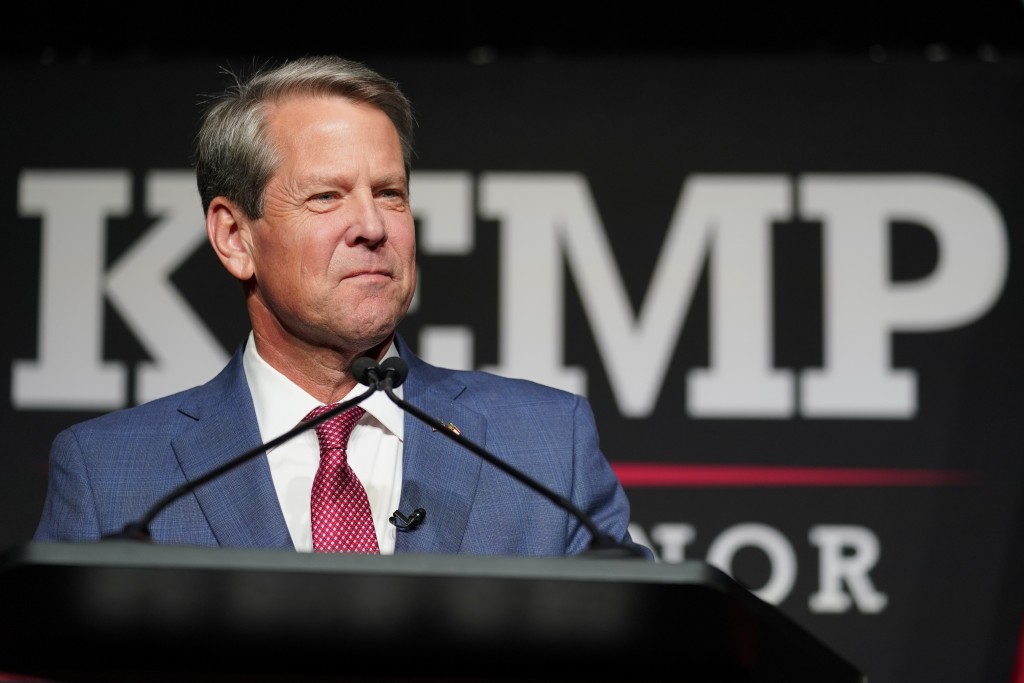 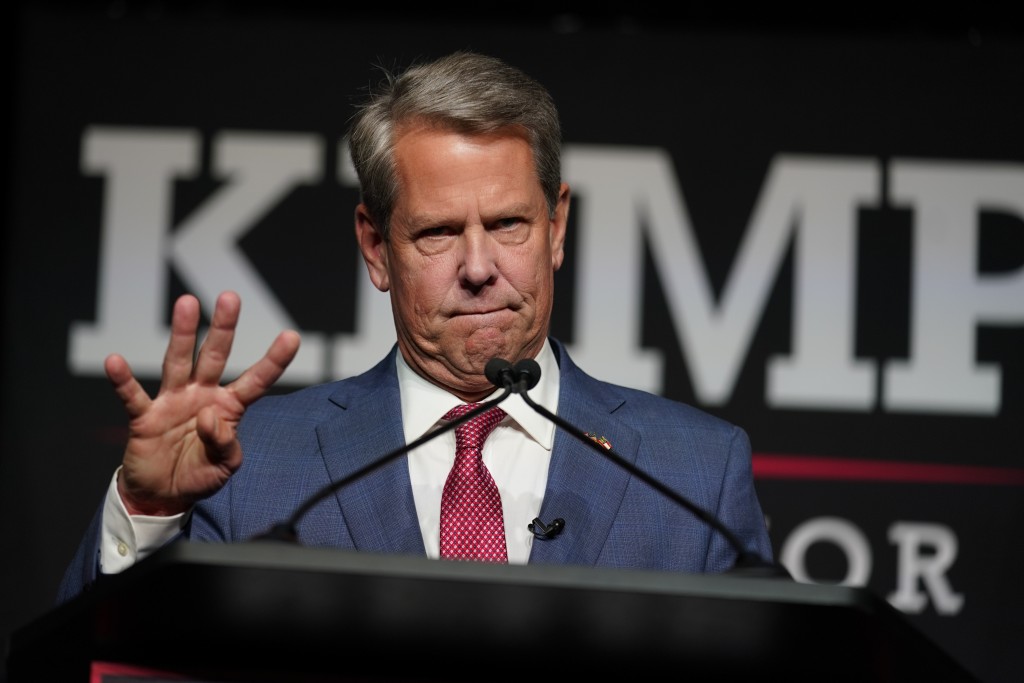 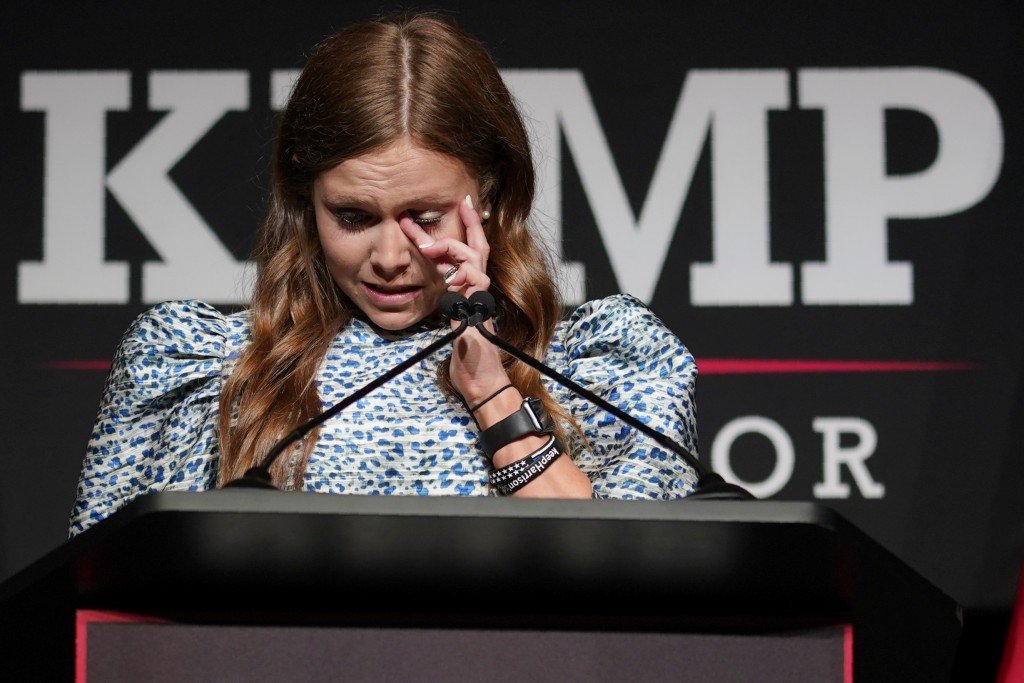 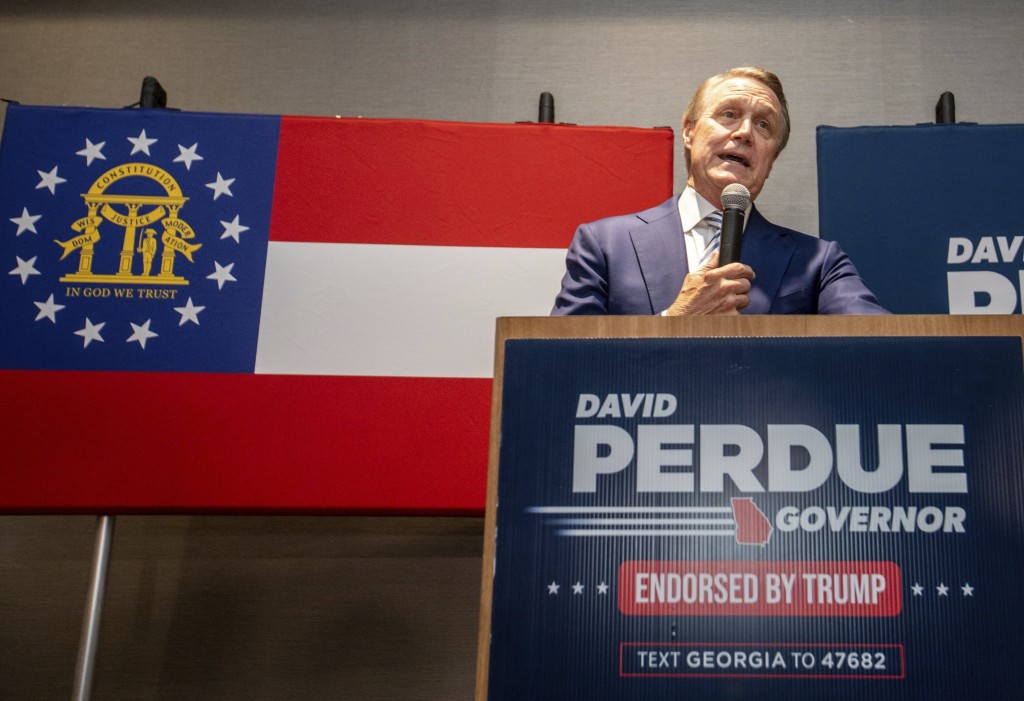 ATLANTA (AP) — Republican Gov. Brian Kemp and Democratic challenger Stacey Abrams will face each other once again in a rematch of the 2018 race that is likely to be one of the nation’s most expensive and closely watched.

Kemp easily turned back a GOP primary challenge Tuesday from former U.S. Sen. David Perdue, who was backed by former President Donald Trump as retribution for Kemp not going along with Trump's effort to overturn his defeat in Georgia’s 2020 election.

Perdue embraced Trump’s election lies, opening two debates between the candidates with the claim that the 2020 balloting was “rigged and stolen.” Georgia election officials found no evidence of fraud. The presidential vote was counted three times, with each tally confirming Democratic President Joe Biden's win.

Kemp, in his victory speech said conservatives “didn't listen to the noise.”

“They didn’t get distracted,” Kemp said. "They knew our record of fighting and winning for hardworking Georgians and tonight because of your support, Georgia Republicans went to the ballot box and overwhelmingly endorsed four more years of our vision for this great state.”

The incumbent continued to swing the spotlight to his quest to defeat Abrams, who told reporters Tuesday morning that she's ready to take on Kemp and wants to talk about the governor's failures.

“Four years ago, I warned about the failure that Kemp was going to be. And four years later I am going to prove he was the wrong choice for Georgia,” Abrams said earlier Tuesday.

Kemp, in turn, was quick to cast a potential Abrams victory as a looming disaster for Georgia, saying Abrams was out of step with Georgia voters and that the contest would be a "fight for the soul of our state.”

“She has embraced the disastrous Biden agenda at every single turn," Kemp said. "You can see the choice at the ballot this November is crystal clear.”

Abrams narrowly lost the governorship to Kemp in 2018 but became a leading national Democratic voice as a voting rights activist. She also cast the rematch as a stark choice, saying she was seeking to improve problems including a lack of health care, poor education and lagging wages.

“The challenge I have is that the answer from Republicans, from our former senator to our current governor, is to fight me instead of fighting the problems that are facing Georgia,” Abrams said. “And I urge everyone to pay less attention to rhetoric and more attention to the record and to the results.”

Abrams has been running for months, seeking to burnish her image among Georgia voters with more than $7 million in advertising, despite the lack of primary opposition.

The centerpiece of her platform remains a call to expand Medicaid to all adults, but Abrams is also highlighting her support for abortion rights and opposition to a law allowing the permitless carry of concealed handguns in public.

The Democratic star has shown the ability to raise millions. Meanwhile, Republicans have raised the specter of her becoming governor to try to unify a party fractured by Trump’s attempts to unseat Kemp.

Kemp tossed off Perdue's challenge in part by using the power of his incumbency to push a raft of legislation through Georgia’s Republican-controlled legislature. He signed measures that cut taxes, allowed people to carry concealed handguns without permits and helped ban transgender girls from high school sports.

Kemp’s focus on Georgia issues won over Will Parbhoo, a 22-year-old dental assistant.

“I’m not really a Trumper,” Parbhoo said. “I didn’t like him to begin with. With all the election stuff, I was like, ‘Dude, move on.’”

Perdue's loss became obvious quickly. He appeared 90 minutes after polls closed to announce that he had called Kemp to concede, and quipped, “Well, I hope everybody made dinner reservations in a few minutes.”

Perdue told his supporters that he would not sulk, but instead do everything he could to help Kemp beat Abrams.

“There is nothing they can ask me to do that I won’t do," he said. “We’re going to do everything we can to make damn sure Stacey Abrams doesn’t take over this state.”

Although Perdue said the results of the primary are “counter to what I saw around the state," he seemed to reject Trump's lies that he was defrauded out of the 2020 election. When two supporters shouted “2000 Mules,” the title of a film that pushes the idea that the 2020 election was stolen. he replied, “I’m sorry, but what we’re going to do right now is make sure Stacey Abrams is not governor of this state.”

Trump conducted an in-person rally for Perdue, sent more than $3 million to two political action committees to pay for ads attacking Kemp on election issues, and kept up a steady stream of rhetorical fire against the incumbent. But Trump has not returned to Georgia since March, and Perdue's ads have been missing from Georgia television stations for much of the crucial early-voting period.