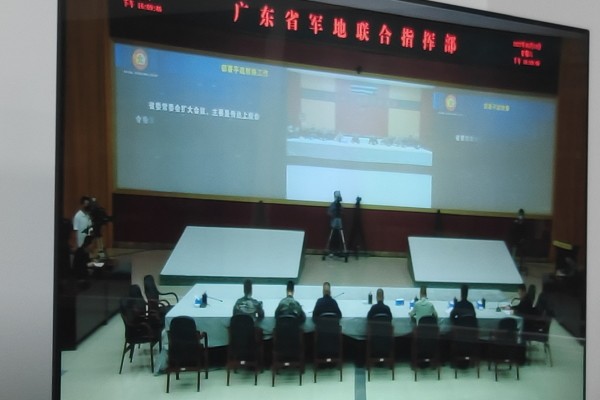 TAIPEI (Taiwan News) — Audio that was allegedly leaked from a top-secret meeting of the People's Liberation Army (PLA) reveals commanders holding a meeting to begin mobilization efforts to prepare for war with Taiwan.

The 57-minute audio clip was allegedly recorded during a meeting of the Standing Committee of the Provincial Party Committee of Guangdong on May 14 and published by Lude Media on Monday (May 23). According to the media outlet, this is the first audio recording from a "top secret military meeting" in China ever released to the public.

Lude Media claimed the audio had been provided by a group of senior members of the PLA who "risked their own lives to expose the evil plan of Xi Jinping (習近平) and the CCP to the civilized world." The recording covers China's military plans for the Taiwan Strait, South China Sea, East China, and First Island Chain, with English translations of the entire transcript now available on both Lude Media and human rights activist Jennifer Zeng's website.

Participants were told that all government levels in the province must change their priority from economic development to "ensuring strategic victory." The commanders vowed, "We won’t hesitate to start a war, crush Taiwan's independence and strong enemies’ plots, and resolutely defend national sovereignty and territorial integrity," and they said it is Chinese Chairman Xi Jinping's (習近平) "strategic decision to coordinate the big picture of international and domestic affairs."

Among the mobilization tasks assigned to Guangdong Province by the PLA's eastern and southern theater commands are the activation of 140,000 military personnel, 953 ships, and 1,653 units/sets of unmanned equipment. Other resources to be requisitioned include 20 airports, six repair and shipbuilding yards, and 14 emergency transfer centers as well as "grain depots, hospitals, blood stations, oil depots, and gas stations."

In order to ensure this "decisive battle" goes to plan, the province has been told to "mobilize and expropriate all sea and air transport capacity" to protect PLA troops as they cross the Taiwan Strait. Also listed are plans to organize "militia fishing boats" to respond to any "infringements" by Vietnam, the Philippines, or Malaysia and to "fight the people's war at sea."

As part of a three-pronged mobilization and deployment model in Guangdong, four cities in the east were identified as being in the "front position," seven cities in the west and south were designated for support and response, and six major cities in the Pearl River Delta were assigned to mobile support. The latter will also be deployment sites for the 74th Army Group as "key support."

The meeting mentioned the use of Tiantong-1 satellite mobile phones to connect joint military-civilian commands to task forces. In terms of space support, the commanders stated they have "16 low-orbit satellites with 0.5 to 10 meter global, remote, ultra-high optical resolution sensing and imaging capabilities."

The commanders believe that based on the Russo-Ukrainian war, China must boost its strength in the political arena because the U.S. and the West will "try everything to slander us, smear us, in an attempt to confuse right and wrong — to shake our will to win a just and decisive battle." They also plan to gain every advantage from the "people's war" by employing tactics from China's zero-COVID policy to "fully mobilize grassroots organizations; widely mobilize cadres and masses; organize military, police, and civilian forces; launch grid control; create an atmosphere of national preparedness; and improve the people's ability to withstand war and disaster so that enemies and spies have no place to hide."