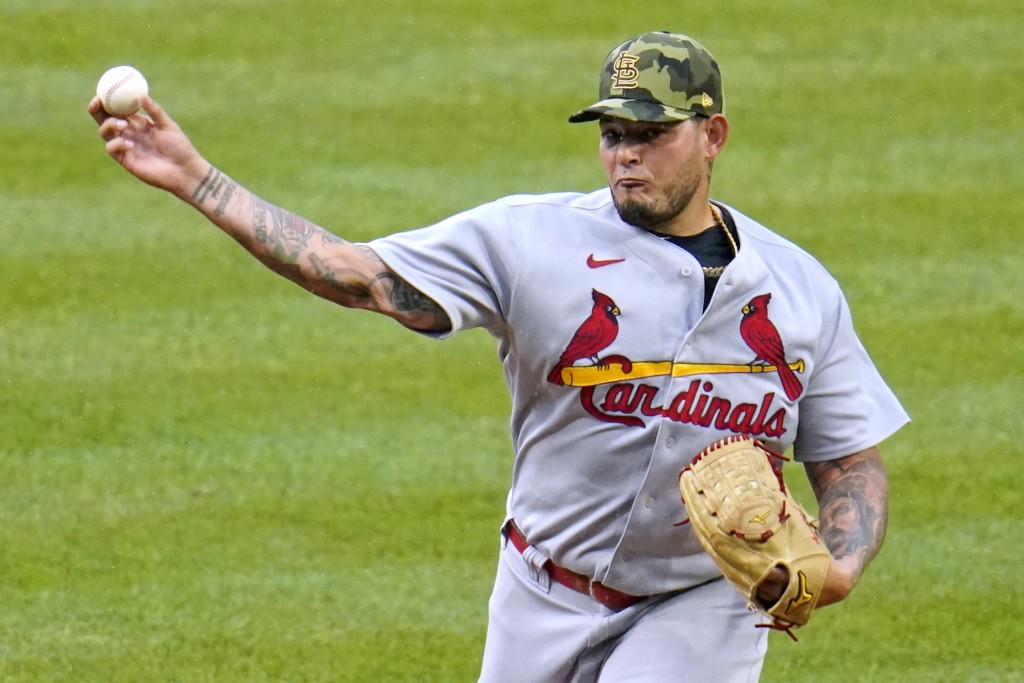 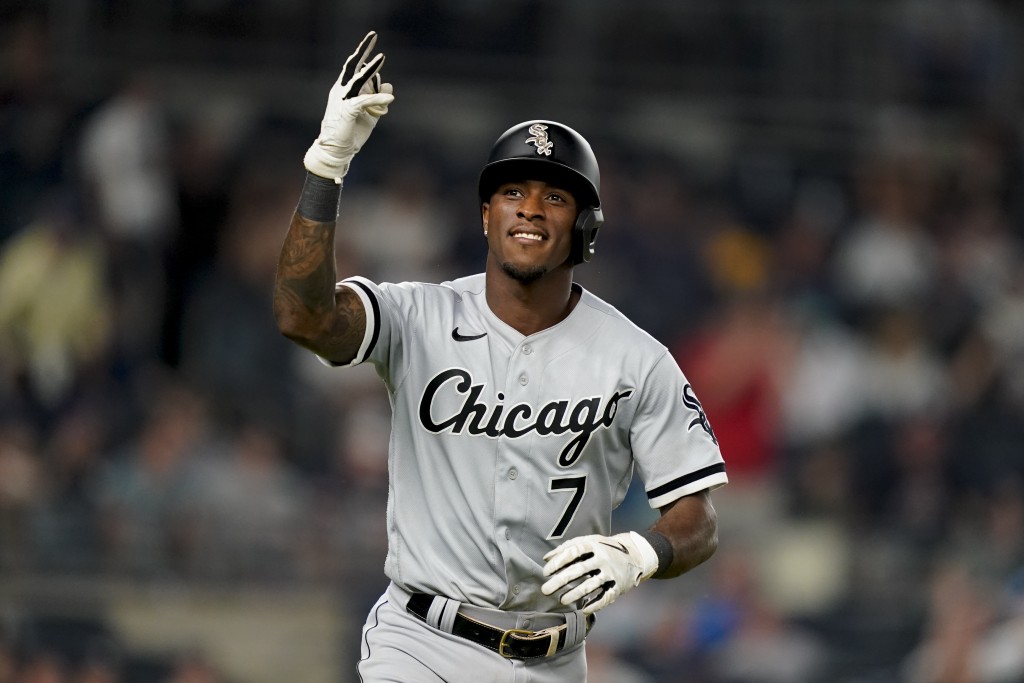 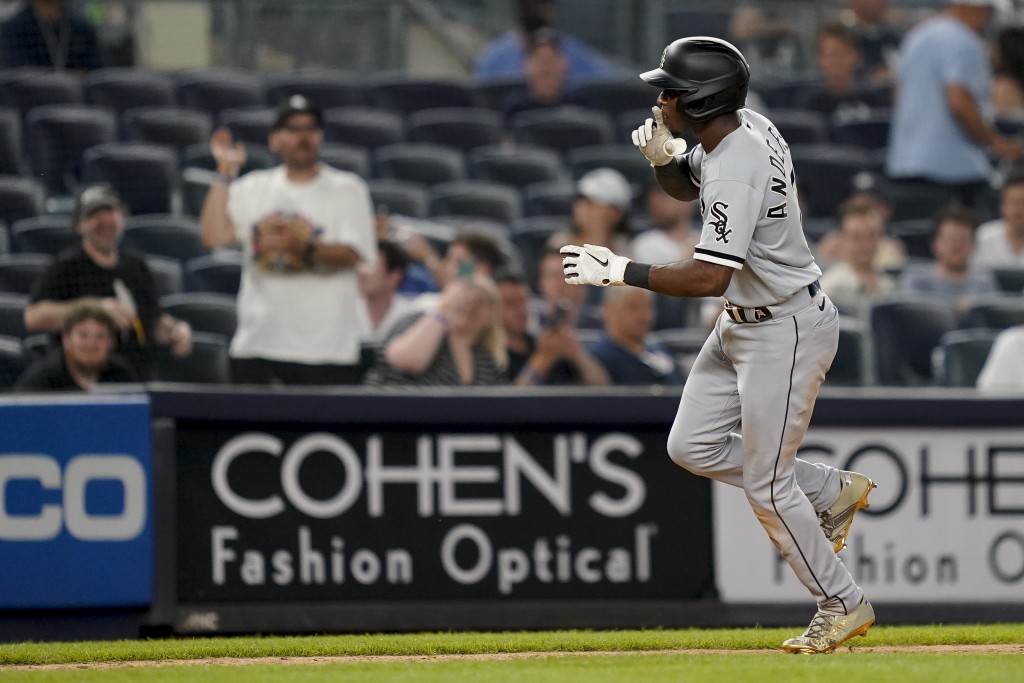 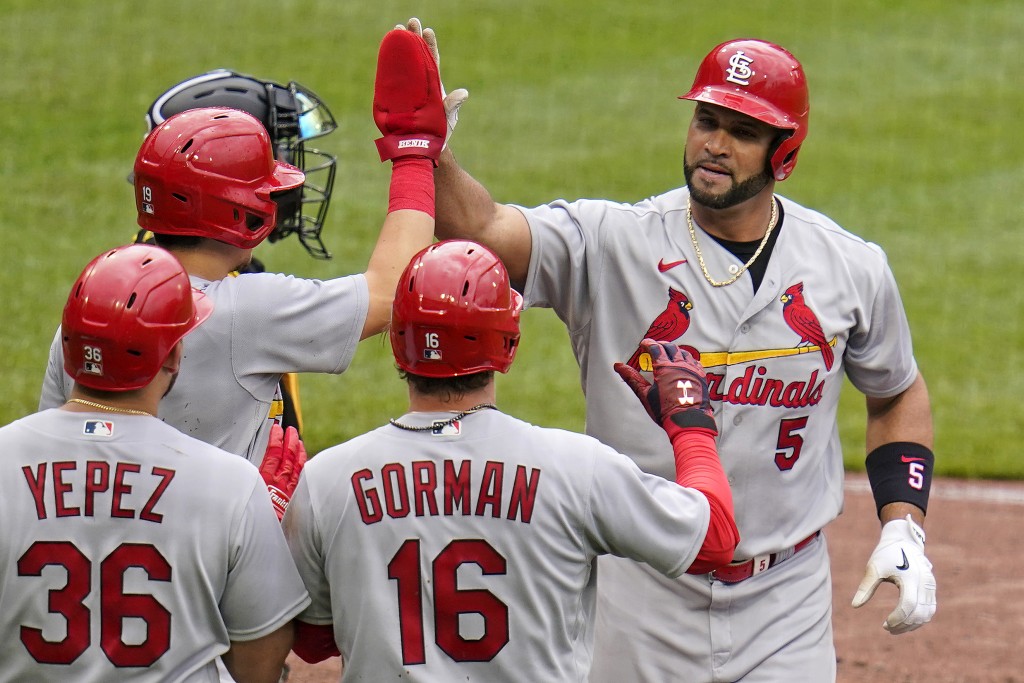 NEW YORK (AP) — Tim Anderson hit a three-run homer and then put a finger to his lips to silence the booing fans, capping a tumultuous weekend at Yankee Stadium and helping the Chicago White Sox beat New York 5-0 Sunday night for a doubleheader sweep.

A day after Anderson, who is Black, accused Yankees slugger Josh Donaldson, who is white, of making a racist remark, the All-Star shortstop didn’t play in the first game. AJ Pollock hit a tiebreaking homer off Aroldis Chapman (0-2) in the ninth inning as the White Sox won 3-1.

Anderson was booed during pregame introductions and prior to each at-bat in the nightcap. He had already hit two singles when he homered over the right field wall with two outs in the eighth. Anderson took a slow trot and put his hands to his lips in a shushing gesture as he rounded the bases. He clapped his hands several times upon crossing home plate and pointed skyward before again making a silencing motion.

Before the five-run eighth, the story was White Sox starter Michael Kopech, who retired the first 17 batters he faced on just 60 pitches before Rob Brantly doubled to left field. Kopech (1-1) allowed just the one hit and two walks while striking out six over seven innings.

Aaron Judge’s eighth-inning homer off Kendall Graveman (1-1) cost Johnny Cueto a win in the opener. The resurgent 36-year-old righty allowed six hits, walked two and struck out five in his second major league outing of the season. Liam Hendriks struck out two in a perfect ninth.

PITTSBURGH (AP) — Albert Pujols hit two homers to boost his career total to 683, then caught the warmup tosses when catcher Yadier Molina made his first pitching appearance to close out St. Louis’ 18-4 romp over Pittsburgh.

Molina gave up homers to Yoshi Tsutsugo and Jack Suwinski and four runs while working the ninth inning, eventually completing the Cardinals’ three-game sweep. But it was not all fun and games for St. Louis. Starter Steven Matz lasted only four pitches before being pulled with stiffness in his left shoulder.

After Matz exited, Angel Rondón (1-0) entered to strike out Ke’Bryan Hayes with his first pitch. Rondón allowed just one hit in five innings for his first win in the majors, striking out four and walking three.

Exactly a week after Pujols took the mound for the first time in his big league career, Molina got his turn with St. Louis ahead 18-0. Pujols was behind the plate to warm up his longtime teammate in-between innings.

Harrison Bader also homered for the Cardinals, who had a six-run second against Bryse Wilson (0-3).

Patrick Sandoval (3-1) struck out seven as he pitched four-hit ball into the eighth inning for the Angels, who won the final two games of the weekend series after a four-game skid. Raisel Iglesias pitched the ninth for his 10th save.

Ohtani hit his ninth home run on Cole Irvin’s second pitch, and Trout added an RBI single in the second and his 12th homer in the seventh. Trout, who also doubled in the first, struck out in the eighth to fall a triple short of the cycle for the second time in six days.

Irvin (2-2) yielded three runs on eight hits over six innings for Oakland, which has lost six of eight. The graduate of Anaheim’s Servite High School struck out four with two walks.

With two outs and men on second and third in the 10th, Alec Bohm hit a little dribbler off Evan Phillips (1-2) to Muncy at second for what appeared to be the final out of the inning. But Muncy didn’t field it cleanly, allowing Garrett Stubbs to score the tying run and Roman Quinn to bring in the winning run just ahead of the throw home.

Stubbs had hit his first major league homer to get Philadelphia on the board in the sixth. The Phillies had tied it with two outs in the ninth on Jean Segura’s single to left that scored Nick Castellanos, whose two-out double started the rally.

Corey Knebel (1-3) pitched an inning to get the win.

BOSTON (AP) — Franchy Cordero hit a grand slam with two outs in the bottom of the 10th, lifting surging Boston past Seattle.

Trevor Story continued his recent power surge with his fifth homer over the Green Monster in four days and Christian Arroyo added a solo shot for Boston, which posted its season-high fifth straight victory and completed a four-game sweep over Seattle.

Jake Diekman (1-0) earned the win for the Red Sox, who trailed 4-3 when pinch-hitter Christian Vázquez singled against Andrés Muñoz (1-2) in the 10th to advance automatic runner Bobby Dalbec. After Kiké Hernández hit a tying single, Vázquez was thrown out at the plate by right fielder Dylan Moore on Rafael Devers’ single, a play upheld by review.

Following an intentional walk and Story’s flyout, Cordero won it with his drive to right on 0-2 pitch.

Adam Frazier had a go-ahead single in the 10th inning for Seattle after Eugenio Suárez’s homer tied it with two outs in the ninth. Frazier also had a two-run homer for the Mariners, who have lost six of seven and 19 of 25.

DENVER (AP) — Francisco Lindor broke a scoreless tie with a single in the sixth inning, Taijuan Walker and three relievers combined on a six-hitter and New York extended its streak of rebounding from losses by beating Colorado.

The Mets dropped the second game of a doubleheader Saturday, which led to them win their franchise-best 14th straight game following a loss. By taking two of three, New York also captured its 11th series win this season.

This marked the first time Colorado has been shut out at Coors Field since Aug. 31, 2020, against San Diego.

Walker (2-0) was in complete command over seven stellar innings, scattering five hits and striking out six. Adam Ottavino, Joely Rodríguez and Edwin Díaz finished it off. Díaz got Brian Serven to fly out and pick up save No. 10.

The Orioles won two of three and won a series against Tampa Bay for the first time since July 31–Aug. 2, 2020, when Baltimore managed a three-game sweep at home.

The Orioles trailed 6-4 in the ninth before Austin Hays managed a pinch-hit, two-out, two-run RBI single off Ryan Thompson, who earlier was charged with a balk that moved two runners into scoring position. Then, a thunderstorm delayed the game for 51 minutes.

Baltimore’s Chris Owings had a successful bunt to move the automatic runner to third in the 11th off Dusten Knight (0-1). Odor followed with a chopper that first baseman Ji-Man Choi mishandled and got past him to plate the winning run.

Orioles top prospect Adley Rutschman was in the lineup for a second straight game and went 1 for 4 with a hit by pitch. Ryan Mountcastle managed his fifth homer before leaving in the ninth with body cramps for Baltimore, which has lost eight of 10.

On a day when every San Diego starter had at least one hit and San Francisco used outfielder Luis González to pitch, Machado’s big afternoon included three doubles, a triple and two RBIs. The five-time All-Star was also intentionally walked. He’s the eighth player in Padres history to have four extra-base hits in one game.

The 26-year-old-Alcantara (4-2) limited the Braves to three unearned runs and six hits. He walked two and struck out seven for his fourth career complete game.

Atlanta star outfielder Ronald Acuña Jr. had two of the hits against Alcantara, extending his on-base streak to 29 games.

Travis d’Arnaud’s at-bat to lead off the ninth was extended after Miami first baseman Jesús Aguilar dropped a popup. D’Arnaud doubled and scored on Ozzie Albies’ double to make it 4-2. Albies advanced to third on a fly out to right and scored on Austin Riley’s RBI groundout. Alcantara got Dansby Swanson on a pop-up to catcher Jacob Stallings to complete his 115-pitch outing.

Marlins second baseman Jazz Chisholm Jr. was removed in the third because of left hamstring tightness.

The one-run win was the second of the season for the Reds. Cincinnati has won nine of 15 following a 3-22 start.

Toronto failed to complete a sweep after winning the first two games of a series for the fourth time this season and the second time this homestand. The Blue Jays dropped last Wednesday’s series finale to Seattle after victories Monday and Tuesday.

Votto, who is from suburban Toronto, homered off Yimi Garcia (0-3) for his first home run of the season, and his third extra-base hit in three games since being activated off the injured list following a bout with COVID-19.

Urquidy (4-1) allowed six hits and one run in a season-high 6 2/3 innings as the Astros won for the third time in this four-game series. Urquidy improved to 4-0 in five career starts against the Rangers and has won three straight games overall.

Blake Taylor gave up a single to Kole Calhoun to start the ninth before plunking Mitch Garver, who homered earlier. He was replaced by closer Ryan Pressly with one out and Sam Huff singled to load the bases. Brad Miller lined a single to center field to score Calhoun and cut the lead to 5-2.

But pinch-hitter Jonah Heim grounded into a double play to end the game and give Pressly his sixth save.

Wisdom had a bouncer go just foul right before he connected for his ninth homer, sending a leadoff drive deep to center field. Schwindel then drove a 1-0 pitch from Kennedy (3-3) into the bleachers in left for his fourth homer. Schwindel and Wisdom also hit back-to-back homers during Chicago’s 7-6 loss on Saturday.

P.J. Higgins drove in three runs with his first career triple for Chicago. Keegan Thompson (4-0) worked three innings of one-run ball for the win for the Cubs, who had dropped four in a row, including blowing a 4-0 lead Saturday.

Faedo (1-1) struck out two in his fourth appearance since being called up from Triple-A Toledo on May 4. The right-hander missed all of 2021 after undergoing Tommy John surgery and began this season at Class A Lakeland.

Cabrera’s double in the first inning scored Robbie Grossman and was the 603rd of his career, tying Cal Ripken Jr. for 16th all-time. It was his 3,022nd career hit, one short of Lou Brock in the 28th spot.

Javier Báez added a solo homer in the eighth for the Tigers, who snapped a three-game skid and are 5-4 since falling a season-low 14 games below .500 on May 12. Gregory Soto pitched the ninth for his seventh save.

MILWAUKEE (AP) — Lane Thomas hit two RBI doubles and Washington broke out of its hitting slump in a victory over Milwaukee, which lost Freddy Peralta to shoulder tightness in the fourth inning.

Peralta (3-2) left after allowing a run-scoring double to Thomas during the Nationals’ six-run outburst in the fourth inning. That marked the Nationals’ highest-scoring inning of the season and matched the biggest run total the Brewers had allowed in a single inning this year.

The Nationals entered the day having dropped seven of their past nine, and they had scored a total of six runs in the seven losses. But they had an early 8-0 lead Sunday and cruised to the win.

Milwaukee got a solo homer from Tyrone Taylor and an RBI single by Andrew McCutchen in the fifth.

Nationals starter Aaron Sanchez (3-3) struck out one and gave up seven hits, two runs and two walks in five innings.

Down 6-0, the Twins scored five times in the eighth, capped by Kyle Garlick’s two-run homer. Jorge Polanco drew a leadoff walk from Josh Staumont (1-1) in the ninth, Max Kepler doubled and Gary Sanchez tied it with his second sacrifice fly in two innings. With two outs, Urshela singled for the lead.

Reliever Tyler Duffey (2-2) got the win and Jhoan Duran pitched a scoreless ninth for his third save.