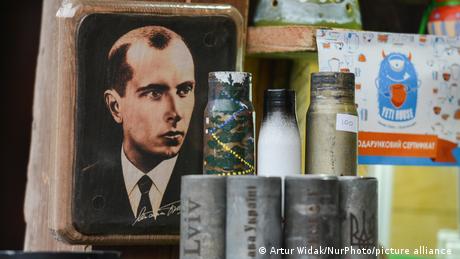 "Bandera is our father, Ukraine is the mother. We will fight for Ukraine!" sings a young woman in camouflage uniform, carrying a machine gun, in a video that Ukrainian defenders in Mariupol shared on social networks in early May. The video seems to have been recorded in a bunker at the Azovstal Steelworks, the city's last stand for Ukrainian resistance to Russian troops. "Azov" fighters were on site, too, a regiment founded by radical nationalists that was later put under Ukraine's Interior Ministry.

Stepan Bandera, killed by Soviet intelligence agents in West Germany more than 60 years ago, is probably the best-known Ukrainian nationalist. His name became a symbol long before the war that Russia has been waging against Ukraine since February 24.

For parts of Ukraine society, Bandera is a hero and role model. Russian propaganda portrays him as an enemy against whose supporters they have been fighting for decades. Russia's military regards the use of his name as a kind of clue to literally hunt down Ukrainians in the occupied territories. Ukrainian media are full of eyewitness accounts of how the Russians chased down Bandera supporters among Ukrainian prisoners of war and civilians alike.

Whoever is deemed to be a supporter faces torture or death. When Russian President Vladimir Putin justified the war against Ukraine in his May 9 speech in Moscow, he spoke of an inevitable confrontation with "neo-Nazis, Banderites."

Life and death of a radical fighter

Bandera's life is closely linked to Western Ukraine, which was then part of Poland and Austria-Hungary. The son of a priest was born in 1909 in the village of Staryy Uhryniv, now in Ivano-Frankivsk Oblast. Bandera studied in Lviv and joined the Organization of Ukrainian Nationalists (OUN), which fought underground for independence. In the 1930s, Bandera was convicted of being a co-organizer of politically-motivated murders in Poland and was released only after the start of World War II. The OUN split into two groups, and Bandera became leader of the more radical wing (OUN-B). While Nazi Germany was preparing for the attack on the Soviet Union, Bandera's comrades-in-arms joined the German leadership with two Ukrainian battalions named "Nightingale" and "Roland."

Bandera was in occupied Poland when on June 30, 1941, his comrades proclaimed an independent Ukrainian state in Nazi-occupied Lviv — and the Germans banned him from traveling to Ukraine. Hitler rejected the idea of Ukrainian independence. Bandera was arrested and spent until 1944 in Sachsenhausen concentration camp. The OUN-B continued to fight for independence in Ukraine with the help of its military arm, the Ukrainian Insurgent Army (UPA). The Nazis and the Soviets persecuted and killed OUN-B fighters. Bandera lived in Munich after the war, where he was killed in 1959 by a KGB agent using cyanide.

Ukrainian emigrants in the West revered Bandera. In western Ukraine, a veritable cult emerged after the collapse of the Soviet Union, there are museums, monuments and streets in his honor. Elsewhere in Ukraine, in particular in the east, people believed in Soviet historiography, which saw him exclusively as a Nazi collaborator — they did not take a favorable view of Bandera. Under pro-Western politician Ukrainian Viktor Yushchenko, who became president in 2005, Bandera was awarded the title "Hero of Ukraine." His successor, pro-Russian Ukrainian President Viktor Yanukovych, had the title revoked.

Bandera's supporters parade through the capital every year on his birthday with a torchlight procession. In 2016, Kyiv renamed the avenue called Moscow Prospect after the nationalist, calling it Bandera Prospect. While the view of Bandera became overall more positive, Ukraine still remained divided over the issue. A survey by the Democratic Initiative Foundation in April 2021 found that one out of three Ukrainians (32%) considered Bandera's acts as positive, and just as many took the opposite view.

The Bandera cult is an "expression of selective memory and politics of history," says Andreas Umland, an expert at the Stockholm Center for Eastern European Studies (SCEEUS). It is about remembering that Bandera was a radical fighter for independence who served time in Polish prison and a German concentration camp and was murdered by the KGB, he told DW. "What people do not remember is that both at the beginning and at the end of World War II, the movement that Bandera led, the OUN, cooperated with the Third Reich for various reasons," Umland added.

Experts have two explanations, said Umland. One group believes the cooperation was forced, while others argue there was an ideological closeness. Both are true, said Grzegorz Rossolinski-Liebe, a Bandera biographer and historian at Berlin's Free University of Berlin. "Of course Bandera wanted a Ukrainian state, but he wanted a fascist state, an authoritarian state, one where he would have been the leader," Rossolinski-Liebe told DW.

Both Umland and Rossolinski-Liebe point out another dark side in the history of the Bandera movement, and that is the involvement of OUN fighters in murders of civilians, Jews and Poles, in Galicia and Volhynia. Bandera personally had no part in the murders though, they say. "The OUN joined the Ukrainian police, in 1941, and helped the Germans murder Jews in western Ukraine," Rossolinski-Liebe said, adding he found no evidence that Bandera supported or condemned "ethnic cleansing" or killing Jews and other minorities. It was, however, important that people from OUN and UPA "identified with him," he said.

Bandera was not a "Nazi," but a "Ukrainian ultranationalist," Umland argued, saying Ukrainian nationalism at the time was "not a copy of Nazism." Rossolinski-Liebe takes a different view, saying Bandera can be called "a radical nationalist, a fascist." The German-Polish historian disagrees with Ukrainian colleagues who say Bandera's supporters fought Nazis just as much as they fought Soviets. "The USSR was the OUN's most important enemy," Rossolinski-Liebe said. He pointed out that the Soviet People's Commissariat for Internal Affairs (NKVD) waged a brutal battle against Ukrainian nationalists — about 150,000 people were killed and more than 200,000 deported.

Selective memory is not something that's unique for Ukraine, it happens in other countries too, Umland said, adding a prominent example from Germany, where a church and streets are named after Martin Luther — although it is known that he hated Jews.

Honoring Bandera damages Ukraine's image because it strains the relationship with Poland and Israel, said Umland, adding that Israel's reticence concerning Russia's current war against Ukraine is one of the consequences. Among Ukrainians, the war seems to have brought about a radical change with regard to Bandera. In April, researchers from the Rating group, a Ukrainian research organization, found that 74% of Ukrainians view the historical figure favorably.