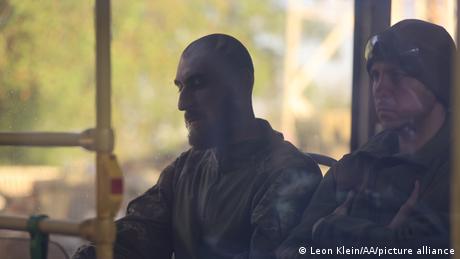 More than 1,700 Ukrainian soldiers defending the Azov steel plant in Mariupol have been taken into Russian custody since May 16, according to the Russian Defense Ministry. Wounded soldiers were among them, some of whom were taken to Novoazovsk, in the self-declared Donetsk People's Republic, for treatment.

However, Russia has not rushed to negotiate an exchange. The chairman of the State Duma, Vyacheslav Volodin, has even gone so far as to claim that Ukrainian prisoners of war — whom he described as "Nazi criminals" — cannot be handed over. On May 26, the Supreme Court of the Russian Federation is scheduled to rule on designating the Azov Battalion a "terrorist organization," which would mean a ban in Russia. The country's General Prosecutor's Office is said to be holding closed-door negotiations on a motion it has prepared to that end.

For his part, Leonid Slutsky — chairman of the Duma's Committee on International Affairs as well as part of Russia's negotiating team in talks with Kyiv — has suggested putting members of the Azov Battalion on trial as well as lifting Russia's 1996 moratorium on capital punishment. "The whole world should see that Ukrainian nationalists only deserve execution," he threatened.

According to German military expert and former NATO general Egon Ramms, condemning Ukrainian soldiers to death in Russia would be a clear breach of international law.

"The soldiers that were evacuated from Mariupol, including the wounded, are prisoners of war," Ramms told German broadcaster ZDF. "That follows the 1949 Geneva Convention. When I hear Duma representatives loudly declaring soldiers deserve the death penalty, those Russian representatives would seem to have once again misinterpreted the legal situation."

The Geneva Convention on the treatment of prisoners of war was ratified in August 1949, and Article 13 of it states: "Prisoners of war must at all times be humanely treated. Any unlawful act or omission by the Detaining Power causing death or seriously endangering the health of a prisoner of war in its custody is prohibited, and will be regarded as a serious breach of the present Convention."

In that context, Andreas von Arnauld, director and dean of law faculty at Christian Albrechts University in Kiel, Germany, emphasized to DW that prisoners of war cannot be punished simply for being participants in armed conflict but may be if they engage in war crimes. In those instances, he says, they nevertheless have the right to an orderly and fair trial in a court of law.

Russia on trial at the European Court of Human Rights?

Christina Binder, professor for international law and human rights protection at the Bundeswehr University Munich, a military college, made another important point: Although Russia committed itself to upholding Protocol 13 to the European Convention for the Protection of Human Rights, which bans the death penalty, it never ratified it.

Russia withdrew from (and was thrown out of) the Council of Europe in March, which also implies Russia no longer adheres to the European Convention on Human Rights, but it still remained effective for six months. "Human rights violations that are committed until mid-September 2022, and for which Russia is responsible ... could be taken to the European Court of Human Rights (ECHR)," explains Binder. That would apply to the torture and execution of fighters from the Azov Battalion.

The consequences of Geneva Convention violations

Grave violations of the Geneva Convention are defined in Article 130 of the document, says Binder. These include "willful killing, torture or inhuman treatment, including biological experiments, willfully causing great suffering or serious injury to body or health, compelling a prisoner of war to serve in the forces of the hostile Power, or willfully depriving a prisoner of war of the rights of fair and regular trial."

Binder says that in the case of such violations, Russia could be held responsible as a state, as could criminally responsible individuals. "In the case of an execution without a fair and regular trial, Russia would be in violation of international humanitarian law," she said. "However, there is no vehicle for enforcing international law in such instances, no 'police.' Therefore, it comes down to sanctions leveled by other countries, for instance economic sanctions."

Individuals could also be tried and held individually responsible for grave violations of the Geneva Convention by national courts. But, Binder adds, Vladimir Putin enjoys immunity in this case due to his position as a sitting head of state. She says the International Criminal Court (ICC) could also be called upon where applicable.

"Neither Russia nor Ukraine are treaty partners under the Roman Statute," she said. "Nevertheless, Ukraine has recognized the International Criminal Court's jurisdiction over violations of the Statute — in this case, for war crimes carried out on Ukrainian territory in 2014. And in such cases, the immunity of a sitting head of state becomes irrelevant," Binder added.

Ukrainian human rights advocates are following the fate of their compatriots with concern. Attorney Oleksandra Matviichuk, director of the Center for Civil Liberties, a Ukrainian non-governmental rights organization, recently told UK news outlet iNews that the UN should provide guarantees that Russia would uphold international human rights standards and ensure that Ukrainian prisoners of war be treated with dignity.

In her view, the story of those who defended the Azovstal steel works deserves to be told to future generations in books and films: "That story has to have a happy end."

This article was written in German