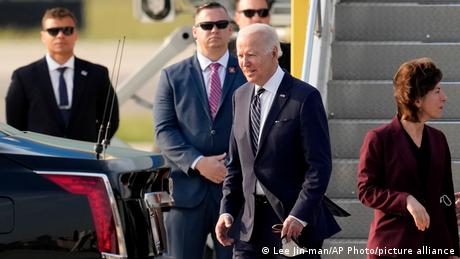 Two security officers who were in South Korea to prepare for US President Joe Biden's visit were sent home after "drunkenly assaulting" a South Korean, officials said.

"The Secret Service is aware of an off-duty incident involving two employees which may constitute potential policy violations," said Anthony Guglielmi, a spokesperson for the agency. He added that the incident had "no impact" on the president's trip.

South Korean police said one of the accused was being investigated for an incident in the early hours of Thursday after getting into a fight over a taxi in front of the Grand Hyatt hotel.

It is believed Biden would stay in the hotel during his visit to South Korea.

The armed physical security specialist and an agent were allegedly involved in the incident that included a heated argument with the taxi driver.

"We have very strict protocols and policies for all employees and we hold ourselves to the highest professional standards," Guglielmi said.

Biden arrived in South Korea on Friday and is set to travel to Japan on Sunday as part of a trip to bolster ties with regional security allies.

The Secret Service guards the president. Thursday's incident is not the first in which agents have been involved overseas.

In 2012 the Washington Post reported Secret Service agents were sent home from President Barack Obama's trip to Colombia for misconduct, including getting drunk and hiring prostitutes.

Three Secret Service agents were sent home from the Netherlands in 2014 after one of them was found passed out after a night of drinking in Amsterdam.