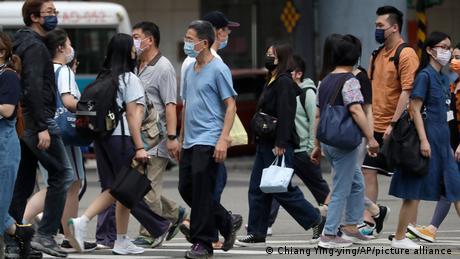 Taiwan has witnessed a surge in domestic COVID-19 cases since it began to abandon its "zero-COVID" strategy last month. On Thursday the island reported over 90,000 local cases in a day for the first time since the pandemic began.

While the number of infections has increased exponentially over the last month, more than 99% of cases are considered to be mild or asymptomatic.

Taiwan's Ministry of Health and Welfare said on May 19 that the virus was spreading widely at the community level and that authorities expect the outbreak to peak around the end of the month. The current outbreak is caused by the more transmissible omicron variant.

In a statement, the ministry announced that Taiwan is pivoting toward co-existing with the virus and that the government continues to strike a balance between risk management and ensuring health services are maintained. As authorities relax some pandemic regulations, they are still urging high-risk individuals to get vaccinated. Taiwanese officials described the new policies as the "new Taiwan model."

Over the past weeks, Taiwan has reduced the number of quarantine days for incoming visitors to seven. The island has also made several adjustments to the isolation policies for individuals who have tested positive and their close contacts.

The changes in COVID-19 policy have created a flurry of confusion and chaos, particularly for those testing positive.

However, several people told DW that the official software used to arrange the medical sessions had either crashed or failed to indicate clinics or hospitals offering such services, leaving many frustrated. The patients said they had had to leave home isolation and line up for PCR tests outside hospitals for more than an hour to officially report their cases to the government.

Yang, a marketing professional in her early 30s, was one of those patients.

"I ended up having to line up for a PCR test at a hospital in order to meet the criteria of a confirmed case," she said, adding that some older citizens had given up complying with government COVID-19 reporting regulations altogether due to their complexity.

"The constant change in policies and criteria have confused a lot of COVID patients," she said. "It feels like the government doesn't really have a comprehensive plan, and they are always trying to catch up with changes in the outbreak."

For Chen, the government's ever-changing COVID-19 policies are increasing the stress on patients.

"After being tested positive, we have to do research about the quarantine criteria while trying to make appointments for a PCR test online … It's a lot of stress for someone who's already sick," she admitted.

Mei-Shang Ho, a research fellow at Taiwan's Institute of Biomedical Sciences at Academia Sinica, thinks the confusion is caused by the government not communicating its policy direction clearly. "When the government doesn't clearly tell the public whether they want to stick to the zero-COVID policy or pivot towards co-existing with the virus, people won't know what rules to follow," she explained.

Reports about hospitals experiencing a shortage of medical staff have also emerged in recent weeks. After the president of the Taiwan Union of Nurses Association revealed that some frontline nurses would have to stay in hospitals to take care of COVID-19 patients despite having tested positive themselves, Health Minister Shih-Chung Chen announced Wednesday that the island was suffering a shortage of medical staff. But the health minister did reassure the public that hospitals would be periodically monitoring staff health.

Chang, a nurse, said some nurses on leave had been called back to work to support the influx of COVID-19 patients following medical staff infections.

"As the workload continues to increase for most medical staff, I'm worried that the quality of medical care will suffer," Chang said.

A victim of its own success

Chunhuei Chi, director of the Center for Global Health at Oregon State University and a former adviser to the National Health Insurance Administration in Taiwan, said Taiwan "is not ready to face an outbreak at this level."

"A blind spot facing countries that have pursued zero-COVID for a long time is when do they begin to move away from the policy," he told DW.

Chi said Taiwan health authorities should have foreseen the exponential surge of case numbers, based on other countries' experiences.

"Initially, Taiwan was still sending all mild and asymptomatic COVID-19 patients to government-run quarantine facilities in March, but if they had rolled out recent policies around that time, they could have lowered the pressure on hospitals and quarantine facilities," he said.

"Taiwan's quarantine policies…basically change every one to two weeks," he added.

According to Chi, Taiwan still relies on using tactics from the early stages of the pandemic to contain the outbreak.

"Because of its early success, Taiwan thought all the experiences it had learned from SARS could be applied to the current outbreak. However, experiences from Western countries have shown that outbreaks caused by the omicron variant will rise exponentially in a very short period," he explained. "That's why their policies seem to have lagged behind the development of the outbreak."

Chi said Taiwanese authorities want to avoid hospitals becoming overburdened, but they also don't want to let the outbreak "drag on for too long."

"Based on the experience in Europe and the United States, the curve of the outbreaks only begins to flatten when at least 40% to 50% of the population have contracted the virus. So far, the number of confirmed cases in Taiwan is still too far from that goal, so this is the dilemma that Taiwanese authorities are facing," he said.