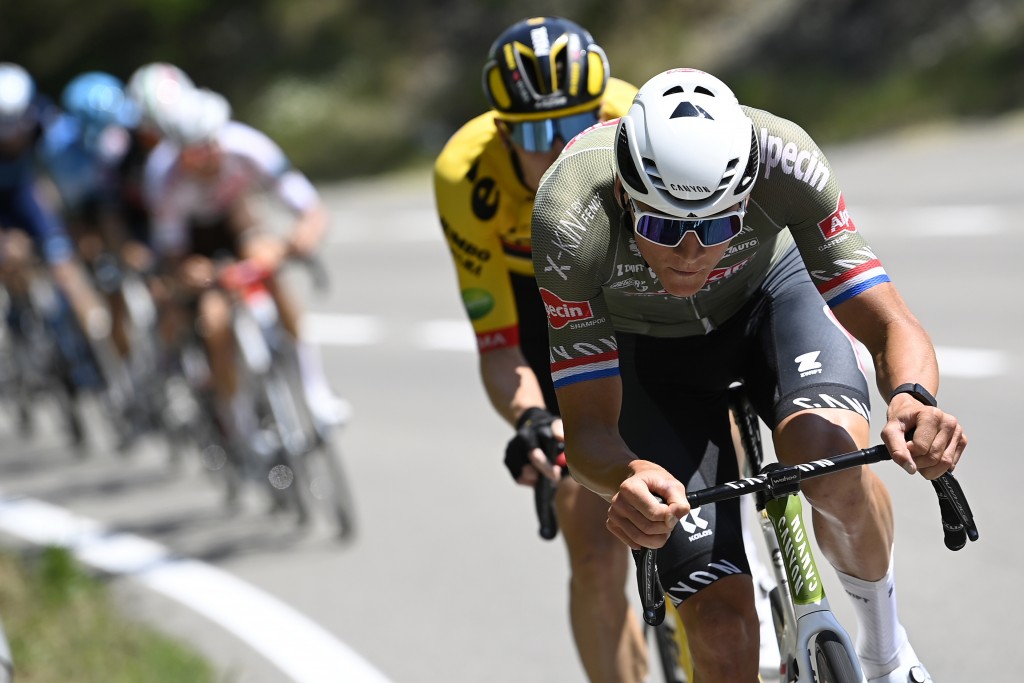 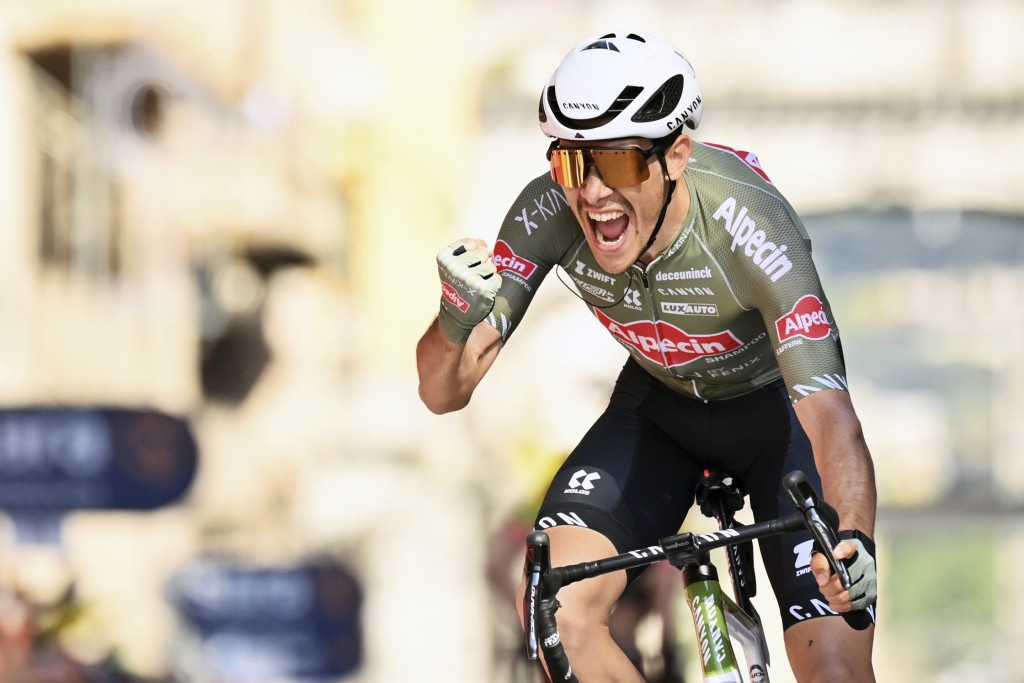 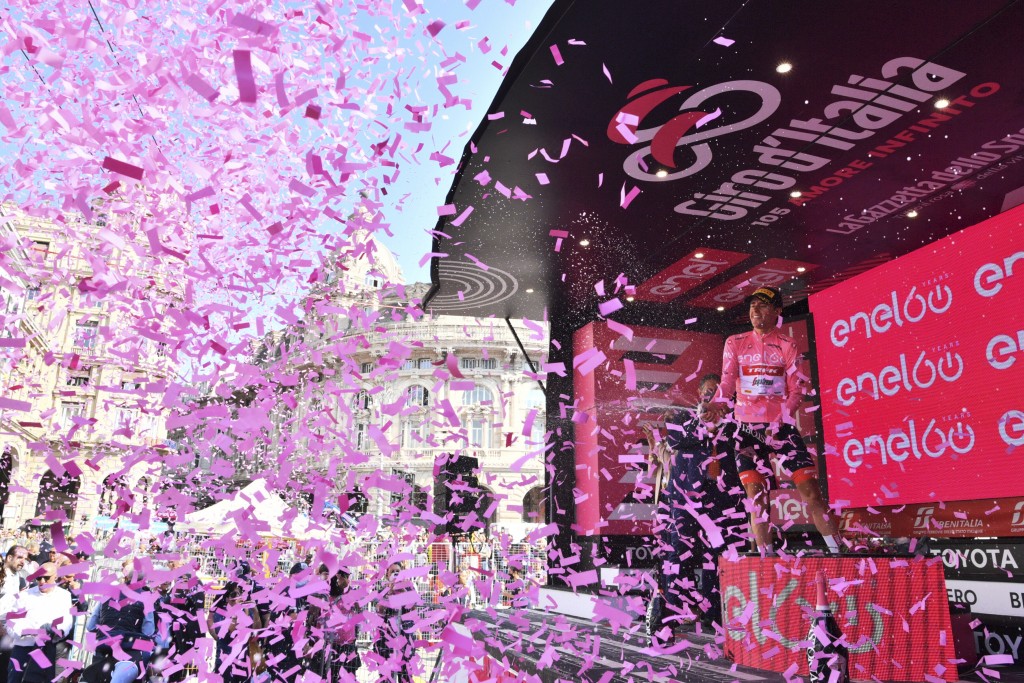 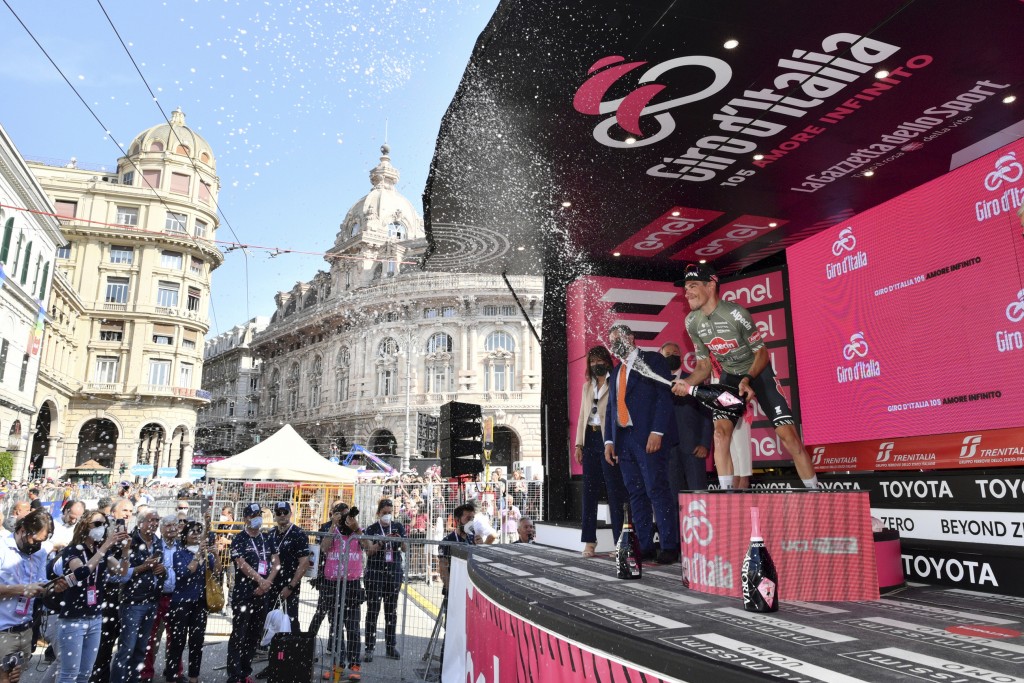 Oldani, who rides for Alpecin-Fenix, edged compatriot Lorenzo Rota by half a bike length, and Dutch cyclist Gijs Leemreize was third at the end of the 204-kilometer (127-mile) route from Parma to Genoa.

All three riders were looking for their first World Tour win and were all wary of each other.

Leemreize opened up his sprint first, but Oldani kicked in and held on for the win.

Oldani burst into joyful tears after crossing the line. He was the second Italian to win in as many days after a wait of 11 days in their home race.

“For sure it was not easy,” Oldani said. "I knew Rota, he’s my friend, so I knew that he was also fast, so I had to watch out … it was not so easy to manage it but in the end I did it. I still can’t believe it, I couldn’t stop crying before because I worked really, really hard for this. It seems like magic that I’ve done it.”

The trio was part of a large breakaway that eventually got up the road after a frantic start with lots of attempts to escape the peloton.

The group had an advantage of over five minutes on the first of the three third-category climbs, the Passo del Bocco.

It was the first time the climb featured in the Giro since the death of Belgian cyclist Wouter Weylandt during the race in 2011. The race honored Weylandt on the descent where he crashed.

Rota, Oldani and Leemreize attacked from the 25-man breakaway group on the second categorized climb of the day and swiftly built a lead, which they worked well together to maintain on the tough final ascent.

Bauke Mollema led the chasing group across the line, 57 seconds behind Oldani. The peloton was more than nine minutes behind.

López maintained his 12-second lead overall from Richard Carapaz and João Almeida. The 24-year-old Spaniard, who rides for Trek–Segafredo, has worn the maglia rosa since finishing second on Stage 4 on Etna.

“My objective was to try to win some stages, but now I live a dream, nine days in the maglia rosa is amazing," López said.

Friday’s 13th stage is the final one for the sprinters although there is a steep, third-category climb in the first half of the 150-kilometer (93-mile) route from San Remo to Cuneo.

One of the top sprinters will not be there as Caleb Ewan pulled out before the start of Thursday’s stage. The Australian struggled since crashing on the opening day and had always said he would leave the Giro before the finish in order to focus on the Tour de France.

The Giro finishes in 10 days in Verona.