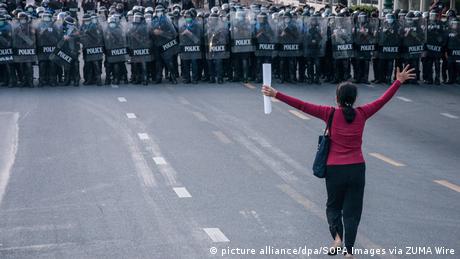 In the wake of the US-ASEAN Summit in Washington between Thai Prime Minister Prayuth Chan-ocha and US President Joe Biden, crowds gathered in front of the US embassy in Bangkok.

Waving large banners, members of the United Front of Thammasat and Demonstration (UFTD) demanded the release of their imprisoned friends and an end to military rule.

Since 2020, the area around the US embassy has repeatedly been the scene of pro-democracy demonstrations in Thailand, which turned into the largest wave of protests the country has seen since the military coup in 2014.

For months, mainly young people took to the streets of Thailand to demonstrate against the military-led government. They demanded a new constitution, the dissolution of parliament and an end to state repression.

Despite calls for comprehensive democratic reforms, not much has changed in Thai society since the outbreak of the protests in 2020.

Despite mobilization on social media, major street protests disappeared in 2022. The main reason for this is the climate of fear and persecution created by the Thai government, Phil Robertson, deputy director of Human Rights Watch in Asia, told DW.

"It’s like a gigantic sword of Damocles has been hung over the head of the entire democracy movement," Robertson said.

Systematic harassment, imprisonment of activists, the announcement of a new law to restrict civil society activities and COVID-19 restrictions have caused the movement to lose strength over time.

Demands for more democracy have been met with a backlash from the state, which has denied young demonstrators a voice in shaping the politics of their country.

According to Robertson, Thais also questioned the government's restrictions on public gatherings during the pandemic.

"The government also used the emergency decree and claims to try to prevent COVID… to stop protests, to arrest people, to persecute people," Robertson said.

People began asking, "Is this just about stopping us from protesting, or is it really about public health?" he said, adding that more than 1,600 criminal cases have been filed against activists in Thailand since 2020.

Disintegration of the movement

Over time, the suppression of protests led to the splitting off and formation of various subgroups, explained Praphakorn Lippert from the University of Passau in Germany.

Those sometimes diverged from the movement's core demands and now represent other interests. This increasingly impedes mobilization for the common cause and has exacerbated the decline of the core movement from 2020, Lippert told DW.

The movement is increasingly fighting internal divisions, Lippert said. "There is no longer a large unified movement, but only actions by various small groups."

New generation against an old system

But the democracy movement is increasingly dominated by a generational conflict.

"The new fault line is really between the progressive youth who want change, who want reforms, who want the government to respect their rights; and the old conservative elites in politics, but also in business and in the military," Robertson said.

At their core, the protests are directed against an economic and political system that has been established for decades and has three privileged groups of participants.

The first is a razor-thin layer of 1% of the population, which owns two-thirds of all Thai assets, according to the Germany-based Heinrich Böll Foundation. Second is the military, which is also endowed with many financial privileges and is intertwined with state enterprises. And third is the world's richest monarchy, which continues to exert strong political influence.

The military coup in 2014 further solidified this system. The military sees itself as the guardian of the monarchy, is not subject to civilian control and has taken precautions through its own enforced constitution to weaken the influence of democratic institutions in the long term, Robertson said.

Many young, cosmopolitan Thais in particular, who are increasingly questioning the system, find no place in the country's power structure.

When the Future Forward Party, which with six million votes was very popular among young voters, was dissolved in February 2020 because of alleged financial irregularities by the parliament — where military-affiliated parties have a majority — many people felt betrayed by politics.

"I think that people feel that it's important they need to express their views and that they are not going to be silenced like they were in the past. Thailand needs to progress and walk into the future," Robertson said.

Thailand's young protest movement broke a taboo by calling for a reformed monarchy. The royal family in Thailand has long been protected by the lèse-majesté law known as Article 112, which criminalizes public criticism of the monarchy with prison sentences of up to 15 years.

"It is the first time that the issue of the monarchy has been made a public agenda and critically discussed. We have never had anything like this before in the past," Pavin Chachavalpongpun, one of the most prominent faces of the democracy movement, told DW.

His Facebook group, "The Royalist Marketplace," founded in April 2020, now has 2.4 million members, making it the largest Facebook group in the country. According to Pavin, it still has a significant influence on political discourse in social media.

'Genie has been let out of the bottle'

Pavin does not see Thailand's democracy movement at a standstill.

"The genie has been let out of the bottle. I don't think it would be able to go back into the bottle again," Pavin said, referring to his Facebook group, which is still growing daily. He said the last two years have not only broken taboos, but also increased the space for criticism of rulers and the elite in traditional and social media.

Robertson predicts a resurgence of activism with Thailand's upcoming 2023 general election. It remains to be seen, however, whether the movement has the potential to shift from virtual space back to the streets once again.