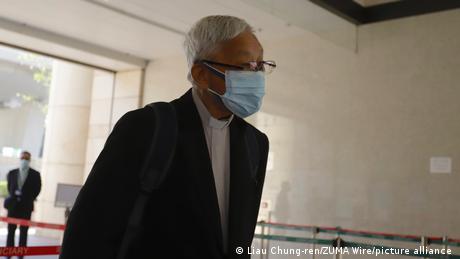 The arrest of prominent pro-democracy figures in Hong Kong, including 90-year-old Cardinal Joseph Zen, is raising concerns among some members of the city's Catholic community that the national security law (NSL) could also threaten religious freedom.

They were trustees of the 612 Humanitarian Relief Fund, which provided legal and financial support to thousands of protesters facing charges related to their participation in the 2019 anti-extradition bill protest.

Even though the fund ceased operation in 2021, Hong Kong police accused the five of urging foreign governments to impose sanctions on the Chinese special administrative region, which is viewed as an act endangering national security.

While four of the defendants were released on bail, Zen's arrest still sent shockwaves through Hong Kong's Catholic community.

"Some of us felt very angry about the arrest," said Ms. Wong, a Catholic, who asked to be identified only by her last name.

Other analysts describe the arrest of Zen as an indication that the NSL has been "weaponized" to crack down on a wide range of non-violent public activities in Hong Kong. "It is chilling to those who are supporting political prisoners waiting for criminal trials," said Eric Lai, a Hong Kong law fellow at the Georgetown Center for Asian Law.

Hong Kong Chief Executive-elect John Lee told a radio show host, regarding Zen's arrest, that threats to national security should be handled "in accordance with the law."

"In any place, there will be people whose background means they have a special kind of support, but if their behavior involves offending the law, it must be handled in accordance with the law," he said.

On May 12, the Hong Kong Catholic Social Communications Office said it was extremely concerned about Zen's arrest, and stated that the Church has always upheld the rule of law. "We trust that in the future we will continue enjoying religious freedom in Hong Kong under the Basic Law," the office said in a statement.

However, Wong says many in the Catholic community worry that the Church could become more similar to churches in China under the NSL.

"We have to expect something like the patriotic association in China to emerge in Hong Kong too," Wong told DW. "They could make Catholic followers in Hong Kong register with churches and make those who are faithful to the Vatican or people like Cardinal Zen have to go underground."

Several Western countries quickly criticized the incident, with the US State Department saying that the arrests show authorities in Hong Kong will "pursue all means necessary to stifle dissent and undercut protected rights and freedoms." Chris Patten, the last governor of Hong Kong under British rule, said the arrest of Zen shows how the Chinese Communist Party is "hellbent on turning Hong Kong into a police state."

China's Foreign Ministry hit back at the criticisms on May 12, urging foreign governments who try to intervene to "immediately stop their clumsy political show filled with ideological biases." The ministry also called on other countries to "immediately stop intervening in Hong Kong and China's affairs."

Meanwhile, the Vatican has expressed concern about Zen's arrest, saying it is following the development of the situation very closely. However, Zen's arrest comes at a time when a deal between the Vatican and China to appoint bishops is due to expire in October.

Cardinal Pietro Parolin, the Vatican Secretary of State, said on May 13 that he was saddened by the arrest of Zen, but he hoped it wouldn't be read as a "disavowal" of the agreement between the Holy See and Beijing. "The most concrete hope is that initiatives such as this one will not complicate the already-complex and not-simple path of dialogue," he said on the sidelines of an event on Pope John Paul I.

Some members of Hong Kong's Catholic community described Cardinal Parolin's comments as "shameful" and said the Vatican shouldn't try to separate Zen's arrest from its deal with Beijing. "He is not protecting his brothers and instead, he is only talking about politics," said Mr. Cheung, who asked to be identified by his last name.

A former bishop of Hong Kong, Zen has long been an outspoken critic of the Chinese Communist Party. He has also been a supporter of Hong Kong's pro-democracy movement.Zen opposed Hong Kong's plan to enact national security laws under Article 23 of the Basic Law in 2003, and he also took part in the Occupy Central movement in 2014.

There are about 400,000 Catholics in Hong Kong, and it remains a very politically divided community. While some in the Church disagree with Zen's stance on some sensitive issues, others in Hong Kong's civil society describe him as a "principled person" who is well-loved by many Hong Kongers. "Cardinal Zen has been very helpful to us and he has contributed to social justice in Hong Kong over the years," said Wong.

Just like Zen, some observers say the Catholic Church has been an important social institution in Hong Kong for decades. "For so long, the Catholic leadership has been an integral part of Hong Kong's civil society," said Maya Wang, the senior China researcher at Human Rights Watch (HRW).

"The Catholic Church has a very long tradition of running schools in Hong Kong. Lots of poor kids are educated in Catholic institutions and they continue to hold respect and genuine love for the Catholic Church," she added.

Can the Catholic community preserve its tradition?

Apart from the increased level of risks facing those who are active in the public sphere, some of Hong Kong's Catholics are also wondering whether they can continue the decades-long tradition of organizing commemorations for the victims of the Tiananmen Square Massacre on June 4, 1989.

Last week, the Financial Times reported that Catholic leaders in Hong Kong recently decided to cancel the commemoration, and when DW approached some members, they declined to confirm whether the decision was final or not. "For the last three decades, the Catholic Church in Hong Kong has done our best to commemorate the June 4 victims," Wong told DW.

"Now that the situation in Hong Kong has changed, we have to reorganize ourselves, and we can't depend on these churches to organize the mass for us. We can pray for the victims by ourselves and we can do our own commemoration," she added.

Others say that while every parish has the right to decide whether they want to hold a June 4 commemoration or not, Zen's arrest already allows many churches in Hong Kong to see the potential impact of the NSL on religious freedom.

"I'm pretty sure most Catholic churches in Hong Kong will now be deterred from holding any commemoration of June 4 this year," said Cheung. "When even such an important religious leader isn't spared from the National Security Law, we can only wonder whether the government is willing to do whatever it can to silence all critics."

Wang from Human Rights Watch added that it will be difficult for Hong Kong to maintain its tradition of commemorating June 4. "It is a very sensitive date for the Chinese Communist Party, and I think it's very clear that they intend to stamp out the commemoration of the event altogether," she said.