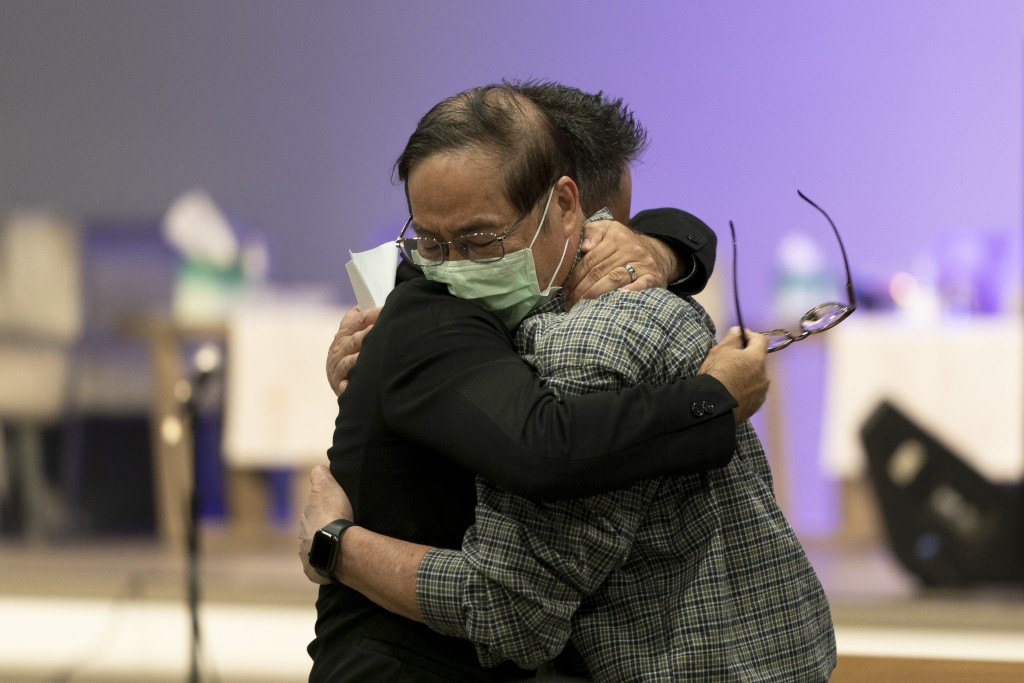 TAIPEI, Taiwan (AP) — U.S. authorities say the gunman behind an attack on a church in southern California in which one person was killed and five injured was motivated by a hatred for Taiwan.

Although born in Taiwan, David Chou nurtured a resentment toward the Taiwanese and reportedly had ties to a China-backed organization dedicated to furthering Beijing’s goal of annexing the self-governing island, by force if necessary.

That has revived questions about the complex and sometimes antagonistic relationship between the two sides, which separated amid civil war in 1949 and have followed very different paths since then — the one toward liberal democracy, the other toward increasingly repressive authoritarian rule under the Chinese Communist Party, which claims Taiwan, despite never having governed the island.

The following is a look at that background and the current state of affairs between the sides.

WHAT IS THE HISTORY BETWEEN CHINA AND TAIWAN?

Taiwan had only been a Chinese province for 10 years before it was ceded to Japan as a colony in 1895, and was later handed over to Chiang Kai-shek's Republic of China at the end of World War II. Taiwan separated again from China in 1949 when Chiang relocated his government to the island as Mao Zedong's Communists swept to power on the mainland.

While they have established strong economic ties, efforts at political reconciliation have stumbled in recent years as Taiwan asserts its own identity and China ups its demands that the island accept its terms for unification between the sides.

WHAT ABOUT DIVISIONS WITHIN TAIWAN?

Native Taiwanese and mainland migrants were divided initially by language, culture and politics, with the mainlanders continuing to identify closely with China and holding to Chiang's dream of eventually returning home as victors. Under nearly four decades of martial law, political power resided mainly with the mainlanders while Taiwanese dominated the private sector.

While there was some intermarriage, frictions, confrontations and bullying between them were not unusual. Some mainland youth formed gangs with links to organized crime, the government and military, partly as a means of defending their interests. Among younger islanders, such divisions have largely receded along with the flourishing of the separate Taiwanese identity.

Now 68, Chou appears to have been fairly typical of the “second generation mainlander" cohort who never fully integrated into Taiwanese society or came to see the island as anything other than a province of the China they continued to identify with.

Chou appeared to have left Taiwan before the process of democratization and the Taiwanese identity took hold, so his participation in the pro-reunification group, by “Taiwanese standards is fairly fringe,” said James Lin, a historian of Taiwanese history at the University of Washington.

WHAT ARE THE GOVERNMENTS' POLICIES?

China says Taiwan is a part of its territory with no right to independent recognition as a state or representation on the world stage. Since Taiwanese President Tsai Ing-wen took office in 2016, Beijing has refused all contacts with her government.

China sends military aircraft into Taiwan's air defense identification on a regular basis in what it calls an advertisement of its threat to use force. It has adopted increasingly menacing language, warning that Tsai, her ruling pro-independence Democratic Progressive Party and others will pay a dire price for refusing its demands and that Taiwan will be attacked if it declares formal independence.

Tsai says Taiwan has no need to make such a declaration since it is already de-facto independent, and has refused to meet China's basic demand that she recognize Taiwan as part of the Chinese nation. She has built up Taiwan's traditionally strong ties with the U.S., Japan and other allies as she has sought to boost the armed forces' ability to resist a potential Chinese invasion.

HOW DO THEIR PUBLICS VIEW THE SITUATION?

China allows no independent polling on the question, but public sentiment tends to run strongly in favor of its arguments on the need for, and inevitability of, unification between the sides. That is solidly in line with the Communist Party's relentless propaganda on the issue and the strongly nationalist tone it has adopted since jettisoning orthodox Marxism.

In contrast, support for unification has fallen to single digit percentages in Taiwanese public opinion polls, with the vast majority favoring a continuation of the status quo of de-facto independence. Most now identify exclusively as Taiwanese, with the government and many social organizations supporting that view. The Presbyterian church, whose parishioners were attacked in the California church, has been closely associated with the pro-democracy movement and promotion of Taiwan’s independent identity. It's still unclear whether the gunman targeted the church because of its Presbyterian affiliation.

Concerns have also risen about Chinese influence on Taiwan's media and the impact of propaganda campaigns pressed by the Communist Party's United Front Work Department, which works in overseas Chinese communities and below-the-radar in Taiwan to promote China's political agenda. At a news conference in Taipei on Wednesday, Presbyterian Pastor Chen Shin-liang said the government should seize the incident to “face up to the hate speech spread by some United Front groups in Taiwan."

Tensions are higher now than they have been in years, but outside of China's military threats they have been largely relegated to rhetorical and diplomatic sparring.

Overseas, Chinese and Taiwanese communities overlap in some situations, but Beijing's demand for political loyalty creates deep fissures. Taiwanese and Chinese maintain their own student groups on campus, with China maintaining strict control over its nationals. That situation is reflected in the business community and politically aligned groups such as the China Council for the Promotion of Peaceful National Reunification, with which Chou reportedly had links. Since the shooting, photos have appeared of Chou speaking at one of the group's events in his home of Las Vegas.