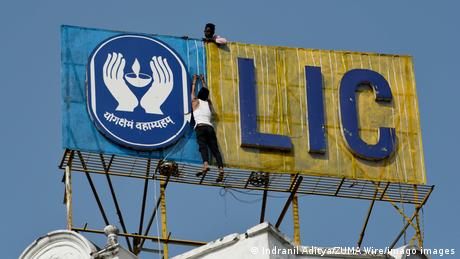 The Life Insurance Corporation of India (LIC) made its debut on the stock exchange on Tuesday after Prime Minister Narendra Modi's government divested a 3.5% stake in the insurance behemoth.

The long-awaited listing marks an important step in Modi's drive to "monetize and modernize" state-run firms and plug a burgeoning fiscal deficit.

It is India's largest IPO ever, with the government raising $2.7 billion (€2.6 billion) from the stake sale, a third of its original target, giving the company an initial value of around $78.5 billion.

The flotation was originally planned for March but was delayed due to market volatility. The offering was also scaled back to 3.5% of the company's equity from 5%.

There was massive interest to buy LIC shares, especially from first-time investors, including many of the firm's employees and policyholders. The IPO was oversubscribed nearly three times during the six-day application period.

But some foreign investors remained on the sidelines deeming it too expensive and due to questions over the government's role in the company's management.

LIC came into existence over 60 years ago through the merger of over 240 foreign and domestic insurers when the Indian government nationalized the insurance sector in 1956.

The firm, a household name in India, dominates the South Asian nation's insurance market, with over 60% share and more than 280 million policies. The company — with more than 100,000 employees and one million insurance agents — has a huge reach across the vast nation, particularly in remote rural areas.

It manages assets worth around $500 billion, which equates to around 16% of the nation's gross domestic product. LIC was the fifth-biggest global insurer in terms of insurance premium collection in 2020.

The company began facing increased competition after the Indian government started liberalizing the insurance sector in 2000 and opened it up again for private players.

The LIC's market share has declined steadily in recent years in the face of competition from private insurers offering specialized products.

Much-needed cash to plug the deficit

The stake sale will give a boost to the Modi government's efforts to raise much-needed cash through privatizations.

"This LIC IPO is expected to lead to further privatization of LIC in stages, resulting in significant revenue-raising for the Indian government over the medium term," Biswas told DW.

India's economic recovery from the COVID pandemic-induced downturn has been hit by a global slowdown, surging commodity prices and weak domestic demand.

The government's fiscal deficit for the current year is projected at 6.9% of gross domestic product, slightly more than the 6.8% targeted earlier. For the next fiscal year, the government is targeting a deficit of 6.4% of GDP.

Amid a growing fiscal deficit and slowing economy, the need to raise funds has become more pressing.

"The Indian government has identified further government privatization of state assets as an important part of its economic policy agenda over the medium term," said Biswas.

"The objectives include helping to narrow the budget deficit as well as providing additional funding for government infrastructure projects."

The sale is also an important part of the government's privatization initiative for 2022.

"Back in 2016, the Modi government had announced its intent to privatize many government-owned enterprises. However, for more than five years, it did not do any privatization. In recent months, things seem to have changed," said Suyash Rai, deputy director and fellow at Carnegie India.

"The privatization of Air India and [helicopter service provider] Pawan Hans , and the listing of LIC, which is a complex, statutory organization, signals for the first time that the government is serious about privatization and disinvestment," he told DW.

The government is also likely to face strong opposition from unions and opposition parties, if it ramps up privatization of state-owned entities.

Rai stressed that plugging the massive budget deficit seems to be the main reason behind the LIC stake sale.

"The government is in a tough spot in terms of its fiscal management, and these steps seem to be motivated by that. I am not sure if they signal a broader push for liberalization."