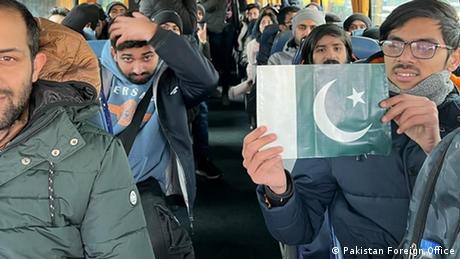 Twenty-year-old Fatima tuz Zahra went to Ukraine last year with high hopes for her gynecology studies. Little did she know that her education plans could be hampered by Russia's invasion of Ukraine.

"My mother sold her car to finance my studies," she told DW, adding that her family has already spent over $10,000 (€9,515) on her studies and accommodation in Ukraine.

After the war broke out in January, she returned to Pakistan through a government-sponsored repatriation drive. Now she doesn't know when she can return to the eastern European country.

"I had just finished my first semester when the war broke out," she said, adding that even if the situation improved in Ukraine, her family might not let her go back.

"There will be more inflation, which means a spike in tuition fee and other expenses," she said. "Many other students face a similar ordeal."

Zahra is not the only Pakistani student whose education has been hampered by the war in Ukraine; government statistics show that around 1,000 students face a similar situation.

Ukraine has been a preferred destination for many Pakistani students because of its quality education and relatively cheaper school fees compared to western European countries.

Muhammad Azeem Irshad, another medical student, says his father spent all his savings to send him to Ukraine for higher studies. He said the Pakistani authorities must pay heed to their plight.

Jalal Uddin, a government official, says they cannot do much in the current situation.

"We cannot send the students back to Ukraine. They need to be patient," he said, adding that a six-month to one-year delay won't be a big issue. "Nothing is more precious than their lives."

Irshad says that if the government didn't take prompt action, their future would be bleak.

"It seems thats the Ukraine conflict will not end any time soon, therefore the government should enroll us in Pakistani medical schools," he told DW.

Abdul Rashid, a former president of the Pakistan Medical Association, Islamabad, believes the problem can be solved.

"The government needs to allocate five seats in every medical college of the country for these students," he told DW.

Transfer to local and regional schools

Pakistan Medical Commission's Vice President Ali Raza told DW that the affected students could take entrance tests in Pakistan schools. "They could also apply for a transfer to other countries in the region with similar programs."

Irshad says the government proposals are not feasible.

"These 'equivalence tests' are for students who have returned to the country voluntarily. For instance, somebody studied three years in Hungary, came back to Pakistan to study here — these exams are for these kinds of students," he said.

"But our situation is different. We did not come back voluntarily; we were forced by a war to return to Pakistan. Students who are in first or second semester cannot take the National Equivalence Board test," Irshad pointed out.

"Another problem is that this test requires six to seven months of preparation. We arrived in March, traumatized and shattered. How could we possibly have prepared for this test which is in June."

Irshad says the government proposals are also costly for them. "Even if we pass the test, the government will offer us an admission to private colleges that usually charge more than $11,000 a year. In Ukraine, it is just $4,500 a year," he noted.

Repatriated students urge the government to exempt them from the entrance test and allow them to pay similar fee that they were paying in Ukraine.